Image
Couple unexpectedly finds love, a shy dog whom they decide to foster-to-adopt, during a first volunteer visit to Best Friends.
By  Jennifer Hayes

A Barnes & Noble bookstore might be the last place one would expect to plant the seeds of a life-changing connection. However, when Daniel Rugiero discovered and purchased “Best Friends: The True Story of the World’s Most Beloved Animal Sanctuary” for his wife, Gina Cheung, it set the wheels in motion.

Once Gina finished reading the book, she knew they had to visit the Sanctuary. Luckily, they live in Las Vegas, which is just a short three-and-a-half-hour drive away. 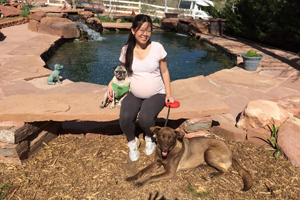 They first visited in March of this year in honor of Gina’s birthday, thinking that there could be no better way to celebrate than by helping the Sanctuary’s horses and dogs. They were wrong. Because toward the end of their trip, they met Shandy.

During their initial meeting, the shy dog ran around the yard and didn’t allow Gina and Daniel to approach. It was not until Daniel picked up a leash and approached her that Shandy sat down, ready to connect. In fact, they connected so much that Daniel and Gina wanted to bring Shandy home with them. But with a baby on the way, plus another dog and three cats at home, they wanted to make sure Shandy would fit in. So they applied to bring her home on a foster-to-adopt basis — a sort of trial period to ensure the pet is happy in a potential new home.

There was nothing to worry about. Once Shandy arrived in Las Vegas, she fit wonderfully into Gina and Daniel’s home. Sure, Shandy (now renamed Piper) was still shy, but in only one month she made considerable progress. So Daniel, Gina, Piper and Puggy (their other dog) returned to the Sanctuary in April to volunteer again, make the adoption official, and celebrate the birthdays of Daniel and Puggy.

They brought party hats and yummy treats, including a special canine sweet potato cake. But best of all, their return visit provided caregivers and staff with the opportunity to see how far Piper had progressed. Kathleen Handley, animal area volunteer coordinator, was amazed to see that the dog she previously couldn’t touch was giving her kisses.

“It was verification that we definitely did the right thing by bringing her home with us,” says Daniel. “That’s where she’s meant to be.” 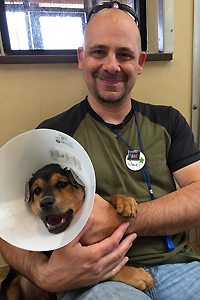 They didn’t return solely to celebrate. They also came to volunteer. But since Gina is expecting a baby in June, they were given a plush assignment — socializing puppies!

Ribbit, Oink and Peep, three puppies who had recent surgery on their ears, sported cones and couldn’t play with the other puppies. However, their enthusiasm couldn’t be diminished. Peep almost jumped into Daniel’s arms when they entered the run, and Ribbit howled in such a way that it sounded like “Hello.”

When the wind whipped through their fur during golf cart rides, the pups were on cloud nine. The cones offered a benefit — catching extra smells in the air.

Room for one more

“Best Friends feels almost like a second home or a home away from home,” says Daniel. “There’s so much beauty there — so many beautiful people and beautiful animals. It fills my heart with love to think about it.”

After forming such a connection, they plan to visit the Sanctuary as often as possible, though their next trip will include an addition. Once their baby is born, they plan to return during their maternity leave.

“We have to prepare the next generation to take care of animals,” says Gina, who wouldn’t be at all surprised if their child learns to walk on all fours — just because of all the four-legged exposure at home.