Though they may technically be considered special needs, three amazing tripods (three-legged pets) here at the Sanctuary are proving that they can do everything their four-legged counterparts can do. And, despite the fact that they are each missing a leg, they are healthy and full of life. 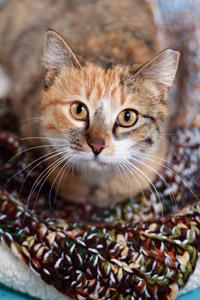 Brianna was living as a community (feral) cat in Utah when she was attacked by another animal. Luckily, she was rescued by a woman and brought to the Best Friends clinic through the community cat program. After veterinarians removed her severely injured leg, her rescuers were wary about leaving her to her own devices in the community. So, after her recovery, Brianna went to live at Cat World.

Caregiver Larry Casale says that while Brianna did very well during the day, he was worried about leaving her out in one of the cat rooms at night while she was still acclimating to life with three legs. He wasn't sure if she'd be able to navigate the room without having run-ins with the other cats.

So, Brianna was separated at night until she took matters into her own paws. She climbed up into the rafters and started walking around just like any other cat. That's when Larry knew she had "graduated," and that she'd be perfectly fine hanging out with her feline companions full-time.

Like Brianna, Sally, a black Lab mix, was also down on her luck. She was found tied to a tree, with no food, water or shelter. Though she had no use of one of her front legs, Sally was trying to care for six newborn pups. A woman rescued the desperate mother (and her pups), and Sally went to the vet, where she had her leg amputated. 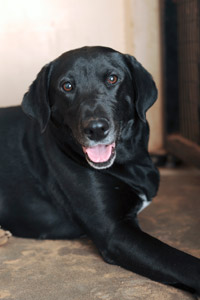 After her recovery, Sally came to the Sanctuary, where she had some trouble getting around. She was overweight and off-balance. But in the few months she's been here, she's lost 19 pounds and is now highly mobile. At a slim 61 pounds, she now loves going for walks, and playing with her run mates.

Sally's caregiver, Deb Turner, says that she is a typical black Lab and the perfect people dog. In fact, she's so good with people that she has become an official greeter at the Welcome Center every Friday.

If cats and dogs can live happily with three legs, what about rabbits? In 2006, Sparky was rescued from a hoarding situation in Reno, Nevada. He was taken by a rescue in Washington, and later transferred to one in Michigan, before finally landing at Best Friends.

Recently, when Sparky had a serious fracture in one of his back legs. Dr. Michael Dix (aka Dr. Mike), medical director and veterinarian, tried to save the limb by putting pins in it. However, because there was an infection in the same area as the fracture, Sparky was still in pain and couldn't hop on that leg. So, he returned to the clinic and had it amputated.

Losing a back leg might sound really traumatic for a rabbit. But Heather Moore, manager at the Bunny House, says that Sparky was feeling better almost immediately after the surgery. Within hours, he was hopping around on his three good legs, and since then, he's been getting stronger every day.

These pets have been through a lot, but you won't hear any complaining from them. On the contrary, they are a picture of strength and resiliency. They are also perfect examples of how people and pets alike can overcome setbacks and disabilities, and live life to the fullest.