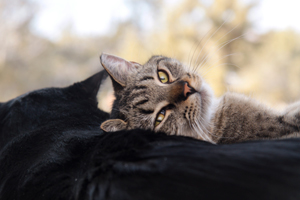 Sometimes, the best friendships grow slowly. That’s how it happened for Cooper and Adam, who lived together in Cat World for nearly a year before their friendship blossomed. At first, the two were casual roommates who shared space peacefully, but weren’t very interested in each other. That’s understandable, though, since both cats were preoccupied with other things, including their health.

Cooper and Adam live in an area of the Sanctuary that houses cats with feline leukemia (FeLV), a virus that affects cats’ immune systems and makes them more susceptible to secondary infections. While some cats with the virus can fight off those infections like champs and remain healthy for years, five-year-old Cooper has struggled to stay well for most of his life.

Besides allergies and a liver condition, Cooper suffered from a painful mouth condition called stomatitis. Eating became difficult because of painful ulcers on his gums. Even when he wasn’t eating, Cooper felt uncomfortable, so he kept to himself. But since having a major dental surgery this past January, he is feeling much better. In fact, he’s thriving. And part of the reason is that he’s decided to let a little feline companionship into his life.

Cooper had never really had a “bestie,” so he took his time picking the right one. That new best friend turned out to be Adam, a shy brown tabby cat who is almost the exact same age as he is. Their birthdays are only 20 days apart. The two are alike in other ways as well. Like Cooper, Adam had always been a bit of a loner. Though he got along with all the other cats, he had more acquaintances than real friends. 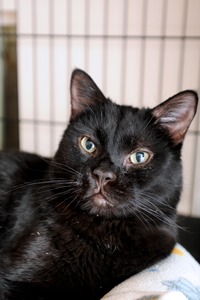 Adam has also had to overcome his own share of health issues, including a recent surgery to remove a mass on the side of his face. The mass turned out to be benign, but Adam took some time to recover. Having recently been through surgery himself, Cooper could relate, and he rallied around Adam, staying close by and grooming his new friend whenever he needed a little help.

Now, while the former loners are still fairly independent, they’re enjoying true cat companionship — an experience that’s new to both of them. Since Adam’s recovery, Cooper has continued the tradition of grooming his friend, and he gladly obliges when Adam walks up to him, sticks his neck out, and asks for attention.

The friendship has given these resilient cats one more reason to stay strong, no matter what health challenges come their way. Of course, they’ll both continue receiving excellent veterinary care at the Sanctuary. But having a feline friend to lean on, especially when one or the other is feeling a little under the weather, certainly makes life happier for both of them.

“It’s nice to see Adam and Cooper with a buddy,” says Cat World caregiver Heather Henley. They’ve loved each other since the day they began grooming each other and their friendship, as Heather says, “built slowly, so it will last.”