Calvin’s journey to his perfect family and best friend began two years ago, before he was even born. That’s when the Hollowells adopted Einstein from Best Friends. The young Manx cat quickly settled in and found a good companion in the family’s older cat. But when that cat passed away, Einstein was lost without his playmate. The Hollowells decided to look to Best Friends again for their next cat, and thought a spunky, 10-month-old kitten named Calvin might lift Einstein’s spirits, as well as their own. But not all cats become fast friends, and time would tell whether the two would get along. 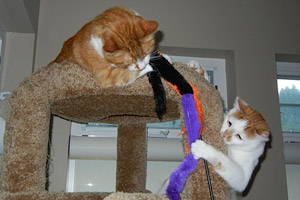 Even before they met, Calvin and Einstein had something in common: “There is something special in Calvin's eyes that melts our hearts ... the same way Einstein did (when we first met him),” Lyn Hollowell explains. The cats even look as if they’re cut from slightly different patterns in the same cloth. Einstein is a mostly orange tabby with white patches, and Calvin is mostly white with orange tabby patches.

Although the two cats didn’t know each other at the Sanctuary, Einstein seemed to immediately recognize Calvin as a long-lost friend. Once Calvin settled in at the family’s home in Washington State, Lyn took the careful route to introduce the two cats. She brought a cloth with Calvin's scent to Einstein to test his reaction, which was to rub his body all over it. Then he ran to the door of the room where Calvin was staying and looked back at her as if to say, “What are we waiting for?”

Taking their cue from Einstein, the Holowells took a chance. They opened the door and waited to see what would happen. What happened was this: Calvin and Einstein instantly began playing together – and they’ve never stopped. The two dash across the house and leap up onto cat trees, in hot pursuit of each other. They play hide-and-seek for hours, using cardboard boxes or paper bags. Sometimes Calvin hides in a box, and Einstein “finds” him by sitting on top of it and waiting for him to come out. And every morning, the two jump onto the windowsills and sit like bookends, watching wild turkeys walk across the yard.

Not only is Calvin “exactly the spunky friend that Einstein had been dreaming about during his catnaps,” but he’s also become a loyal companion to Lyn and her husband. At bedtime each night, he goes to get Lyn from her office. Then he’ll either curl up on her legs, not moving until it is time to wake up in the morning, or he’ll act as a foot warmer.

“A puddle of purr” 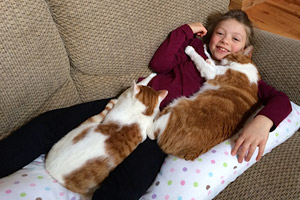 Most special of all is the way that Calvin interacts with the Holowells’ two daughters. Like Einstein, he is completely devoted to them. If they’re playing with toys or a game, Calvin likes to get his paws in on the action, batting things around and causing lots of giggles. He can go on that way for hours, but immediately settles down to a loving “puddle of purr” if they pick him up to give him a hug. “I swear they could carry him all day, and he would be in love,” Lyn says.

As for the girls, they look forward to visiting the Sanctuary when they get a little older. Until then, it will always be the special place that took care of their cats before they joined the family. Now, Holowell family nights include four people and two very happy lap cats.

Calvin has found his perfect home, but there are plenty of other adoptable cats at the Sanctuary.

Photos courtesy of the Hollowells