One day, as a couple traveled down the road, they spotted an injured nestling crow by the roadside. Concerned, they stopped, got out of their van, and approached the black baby bird. Something was wrong with the crow’s legs; she couldn’t stand or walk. They picked her up, took her in, and fed her, taking her along with them as they traveled. 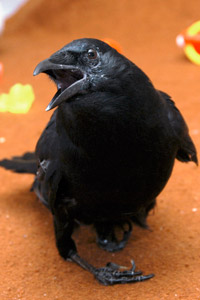 It was clear that the baby bird wouldn’t survive on her own with her injured legs, so they named her Annabel and welcomed her into their little traveling family. The couple made jewelry, which they sold at renaissance fairs, traveling from fair to fair in a van. Because they made silver jewelry, all Annabel’s toys were made of silver. Crows are not known to be quiet, and Annabel tended to be very conversational; she talked a lot to herself and chatted, in crow talk, to the customers buying jewelry. Occasionally, people mentioned to the couple that it wasn’t legal to keep a wild bird in captivity, and that Annabel could be confiscated and taken away. Eventually, the couple realized that they shouldn’t keep her as a pet.

State and federally licensed wildlife rehabilitators are required to have experience and training before they can obtain a license. In Annabel’s case, a licensed rehabilitator would have known that Annabel needed good, prompt, corrective treatment for her feet, and that might have meant that she could have been released to live out her natural life in freedom in the wild.

As it was, the people were very kind to Annabel, and they did their best. When they realized that they couldn’t keep her as a pet, they contacted Best Friends Animal Sanctuary. Annabel fit right into the wildlife educational program at Wild Friends. Along with a dozen other educational birds at Wild Friends, she has a federal permit. These birds receive thousands of visitors a year – tour groups and individuals wanting to learn about wildlife and the importance of preserving wildlife habitat.

Another crow who lived as a pet 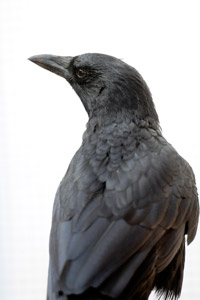 Just like Annabel before she came to Best Friends, Alfred grew up not knowing any other crows. He spent 16 years living as a pet with an elderly couple. When the time came that they had to go into a retirement home, they were sad to learn that Alfred could not go with them and that keeping him had been against federal and state law all along.

Fortunately, Wild Friends was able to accept Alfred as well. Although he hadn’t seen another crow since he was a baby, he instantly fell in love with Annabel. But he didn’t drop his long love affair of another kind when he met her. Alfred had always played with toys, and he still does. His favorites are a doll called Henrietta Chicken — he’s had a dozen Henriettas over the years — and a purple triceratops. (He’s fond of the color purple.)

Though crows are highly intelligent and communicative, Annabel and Alfred would have no idea now how to survive in the wild. They live a very happy life together, even though their life in captivity can never have the sense of boundless freedom and joy that is the legacy of a wild bird.

Both birds were loved by the people who kept them as pets, but in the end, if Alfred and Annabel can’t be released into the wild, their story may help keep other crows and birds of all kinds wild and free, just how they’re meant to be.