Image
Best Friends adoption center in Salt Lake City finds perfect home for pit bull with another pit mix friend. They love playing with one another.
By Denise LeBeau 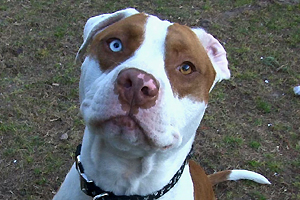 Henessey the pit bull terrier is just about as perfect a dog as anyone could hope for. He’s adorable, with one blue and one brown eye, and he loves everyone he meets — human or canine. But good dogs lose their homes all the time, and that’s what happened to Henessey. He ended up at Salt Lake County Animal Services in Utah, where he was adopted. However, he was returned to the shelter because he wasn’t compatible with the family’s chickens.

Even though he had been returned, Salt Lake County Animal Services was not going to give up on him. Due to their great partnership with Best Friends Animal Society, together they helped change Henessey's fate.

Each day for a period of several months, Henessey hopped into a shelter vehicle for a short trip to the Best Friends Pet Adoption Center in Salt Lake City. The center is there to help dogs like Henessey who, for whatever reason (even chickens), haven’t yet found a home. “Just a few years ago, a dog like Henessey wouldn’t have had the variety of options he does today to find a home,” says Lawrence Nicolas, adoption manager at the center.

That extra time to look for a home was just what Henessey needed. Nadia Casper was attracted to his adoption profile online, and she started to think about adopting him. “(The profile said) he’s friendly and he likes other dogs, toys and treats,” says Nadia. Also, she noticed that he looks a whole lot like her dog Sully, who is also a pit-bull-terrier mix. Nadia thought they would make a fantastic matched set of awesome dogs.

After thinking about Henessey a bit more, Nadia felt she was ready for a second dog and decided to go for it. Since she was familiar with Henessey from his adoption bio, Nadia felt like she already knew him when she walked into the pet adoption center. He was everything she’d hoped for — loving, affectionate and ready to accept as many treats as she was willing to give him.

The only question was whether Sully and Henessey would get along. Nadia was a bit concerned because she had already fallen in love and hoped Sully would feel the same way. But she had nothing to fear. “Sully was ready to love Henessey immediately,” says Nadia. She adopted Henessey and the three of them left the adoption center ready to start the next chapter of their lives. 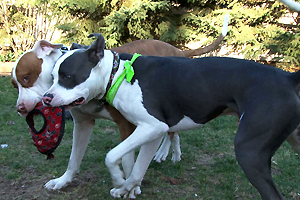 Now, Henessey and Sully are inseparable. They love to wrestle and roll around together, and then get into a little dog pile for a nap. The only thing Henessey loves as much as Sully is his big Jolly Ball. “I say ‘Where’s your ball?’ and Henessey stops what he’s doing and goes and gets it,” says Nadia. “If I don’t start throwing it fast enough, he’ll roll it himself and begin his own game of fetch.”

The most rewarding part of Henessey’s adoption for Nadia is that she helped save a life, but that’s not all, she says. “Dogs help you as much as you help them. Their unconditional love and all the fun they bring into your life is irreplaceable.”

In just a short time, Henessey has brought so much love and life to his new family — all because he received some extra time and care when he needed it.

Lawrence says, “We’re thrilled that Henessey found his perfect forever family. That’s what we’re here for — to give our municipal shelter partners’ pets more time and opportunities to get the second or third chances they deserve to live an amazing life as a cherished family member.”

Watch the video of Henessey at home.