Image
Two senior dogs become good canine friends. One had been rescued from an institutional hoarding situation and the other surrendered by his person.
By Christelle L. Del Prete 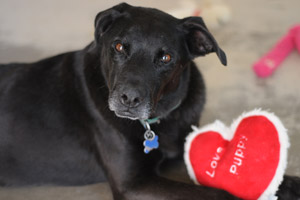 Jude is a people-loving senior dog. He’s also a survivor. Six years ago, he was one of many dogs found living confined in a cement building. He had been living without seeing daylight, feeling grass beneath his paws, or experiencing human kindness. Jude had also not been socialized with other dogs. Six years old at the time of his rescue, Jude is now 12, and it is quite likely that his new friend, Omar, is the first canine companion he’s ever had in his life.

Jude’s world began to open up when he came to Best Friends by way of Pets Alive in New York. Once he became comfortable at the Sanctuary, his true colors began to emerge. Despite the lack of human compassion in his early life, he loves getting affection, pets and hugs from people. Jude also loves going on sleepovers with volunteers, and he quickly becomes a favorite with those who spend time with him. Although Jude showed such an affinity for people, he had a reputation for being dog-aggressive. He lived in a building with other dogs, but he lived alone in his run. That is, until Omar came along. 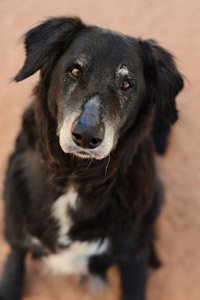 Omar the dog came to the Sanctuary last April from a shelter in Palm Springs, California, where his person had surrendered him. Being 10 years old and thus a senior himself, Omar moved into the Old Friends building in Dogtown, which is also where Jude lives. Jude and Omar’s caregivers did not pair the two up right away. In fact, Omar had another roommate during his first few months at the Sanctuary.

But Best Friends caregivers wanted to make sure that Jude was living life to the fullest. They also wanted to improve his chances of being adopted, as “single” dogs sometimes have a longer wait to find homes. They thought that, if they picked just the right dog, Jude could have a friend – maybe even a run mate. Caregiver Meagan Thomas immediately identified Omar as the perfect potential friend for Jude. He has a calm energy and a gentle soul; she thought that, if any dog could get along with Jude, he could.

Meagan and the other caregivers did not rush things. Jude had been an only dog for a long time, and they needed to introduce the two slowly. So they started by taking the two for walks 10 feet apart and parallel to each other. When that went off without a hitch, they let the two get closer and closer, until they were able to spend 10 minutes in a run together, with supervision. They then increased the time to half an hour, then an hour.

As a final “test,” Jude and Omar spent three weeks in a run together during the day, still under close supervision; at night, they were separated. Since there were no problems, they became full-time run mates. They can now be found lounging peacefully in the sun together. Their camaraderie proves that Jude does not have to live as an only dog – it makes finding the perfect forever home that much easier for him.

Learn more about Jude, Omar or other adoptable dogs at the Sanctuary.