Image
Chuck the horse may not be classically beautiful, but he is a one of a kind horse and to be celebrated for all his uniqueness and endearing qualities.
By David Dickson

Many equine enthusiasts get awfully excited about a "classically beautiful" horse. As for Chuck, the newest horse at Best Friends, well ... he doesn’t exactly match up on the classically beautiful list of checkpoints. He’s a bit pigeon-toed. His head is a tad on the large side. As is his nose. Even his lips are different. They curl up into something of a permanent smile, earning him the endearing nickname of Chuckles.

But what do folks at Best Friends think of him? "He’s very cute!" says horse manager Jen Reid. Chuck became popular pretty much the instant his feet touched Sanctuary soil. There’s just something about him.

One of a kind horse 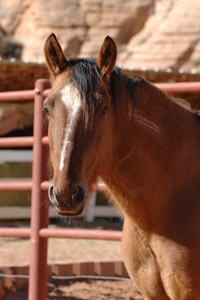 At Best Friends, every animal is celebrated for who they are, no matter what mold they do or don’t fit. Chuck seems to draw people in almost instantly for one reason or another. He’s only been at Best Friends a couple weeks now and already has several more of those endearing nicknames. Another of them is Chuck the Wonder Horse.

Chuck came to Best Friends after having been found as a stray. Thank goodness it’s not often you find a horse wandering around on his own, but that’s what happened to Chuck. He’d been turned loose and left to fend for himself. The livestock officer from Arizona who found him wasn’t able to locate Chuck’s family, or anybody else willing to take him in. So, the officer contacted Best Friends, where there happened to be room.

At first, Chuck was a bit uncertain about being handled or petted in any way. Obviously somebody had let him down not too long ago. However, it didn’t take him long to realize that everyone at the Sanctuary was only trying to help. And help they did.

Royal treatment for a horse 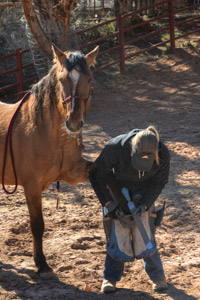 Chuck gets a hoof trim.

Consider Chuck’s feet, as one small example. They were overgrown, which can become awfully uncomfortable for a horse. "With a little trim, they’re just fine," Jen says. When it comes to helping a horse feel safe and comfortable, every little bit counts.

Chuck also needed to take some antibiotics (after his gelding surgery) not long after arriving. Here, a little medical creativity made a big difference. Staffers started mixing his antibiotics with molasses, forming a paste that they draw into a large syringe. "He thinks that’s pretty tasty," Jen explains. Even his daily meds, then, have become something Chuckles looks forward to. No wonder he’s settling in so well. "He’s coming around tremendously," says Jen.

Without question, Chuck is as charming on the inside as he is cute on the outside. "He’s a fabulous boy," Jen says.

You may be interested to find out how much it costs to feed a horse.