Image
Cat and his friends who were living in a warehouse come to Best Friends. Training and patience help them learn to trust people and become less shy.
By Christelle L. Del Prete

Imagine having lived in the same place all your life and then being suddenly kicked out with no place to go and no idea how to survive anywhere else. That’s the situation that Solomon and his family faced before coming to Best Friends. The five cats had been living in an unused conference room in a warehouse. While that hardly sounds cozy, it was a perfectly acceptable arrangement for Solomon and his family.

The warehouse owner fed the cats and let them come and go as they pleased. So, while they were used to seeing people around (and relying on them for shelter and food), they weren’t exactly cuddly pet cats. They’d come into the warehouse to sleep and eat, and then leave again. 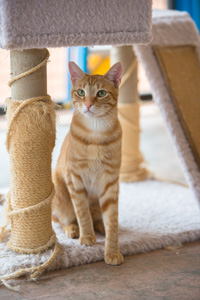 But then the warehouse changed hands, and the cats got stuck in between a rock and a hard place. The new owner wanted them out of the building immediately. The trouble was that Solomon and his family didn’t know how to survive on their own outdoors, especially without anyone feeding them. Nor were they comfortable enough with people to move into someone’s home. Because they lacked proper socialization, that situation would have been incredibly stressful for them.

Instead, the cats were humanely trapped and taken to a local shelter. That bought them some time, but it didn’t solve the challenge of what to do with them long term. And they were frightened and unhappy in a shelter environment. So they came to Best Friends, where they would have all the time and help they needed to get used to living with people.

A taste for treats

During this transition, Solomon was the most frightened and confused of the five cats. His whole world had changed. Suddenly, there were lots of people around — caregivers, visitors, volunteers — and they didn’t just drop off food and walk away. They called his name and offered him treats. And, while he wouldn’t let anyone touch or pet him, the treats kept him interested and never very far away. Because, in spite of his mistrust of people, Solomon found their tasty treats irresistible.

As it turns out, Solomon is the kind of cat who’ll do just about anything for food. And, since food is a common reward in positive-based training techniques, Cat World caregivers had the perfect tool to help Solomon. And before long, treats became the key to Solomon’s heart and mind.

Caregiver Miranda Nessen stepped up to take Solomon under her wing and get his training started. She did this by getting Solomon to “work” for his treats. At first, he only had to get close enough to take a treat that she had tossed a few feet away from her hand, but gradually she upped the ante and drew him closer. Solomon quickly learned that it’s well worth his while to start to trust his caregivers.

“He wasn’t too thrilled with this exercise in the beginning,” explains Miranda. “But over the past few months, he’s become the friendliest of the former warehouse cats.” He’s so smart and motivated that he’s even learned a few tricks. He can stand up on his back feet, for example, and reach out his front paws for treats. Or, he’ll slap the air or Miranda’s hand in a double high-five.

By closely watching Miranda’s hands, Solomon has even learned hand cues. For example, when Miranda points to the top of a cat tree or a shelf, Solomon leaps right up on it. He’s one smart kitty, and that’s helping him get through what could have been a tough transition. 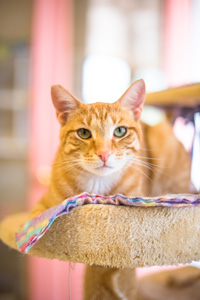 Preparing for the future

Exercises like these have helped Solomon shed his fear of people. He’s also catching on to the fact that, in addition to his caregivers, visitors and volunteers also bring good things. Now that his curiosity has kicked in, Solomon has begun reaching out to people in his own way. He’s one of the first cats to run up and check out anyone walking around outside his cattery. And, while he didn't dare touch anyone before, now he rubs up against people’s legs. With time and gentle encouragement, he’s becoming an entirely different and affectionate cat.

Even so, Solomon still shows signs of shyness. He’s not ready to let anyone pick him up yet, and he’ll still dodge away if someone reaches out to pet his head. But, as Miranda explains, he’s come a long way from the scared cat he was when he first came to Best Friends, and people are slowly able to do more and more with him. For example, Miranda can now run her hands along Solomon’s sides and under his belly, preparing him to be picked up one day.

Even if that day is far in the future, it’s OK. Because now that Solomon has learned that people are his friends, he’ll never again be stuck in between, or in danger.

Help more shy cats find their way in the world. Here’s how: