Image
Senior citizen cat suffering from aches and pains in his back is feeling his best after receiving veterinary laser therapy treatments.
By  Christelle L. Del Prete 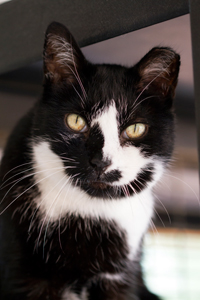 Trent may be the oldest cat in Morgaine’s, the building where he lives in Cat World, but these days, it’s kind of hard to tell. Sure, the 17-year-old senior spends a lot of his time in a cat bed on top of a dryer, soaking up the soothing heat. But just watch this reserved older gentleman spring into action at mealtime.

Not only does Trent investigate the bowls his caregivers prepare for him, he also samples the other cats’ food — just to make sure they’ll like it. And, since jumping down from and back up onto his favorite perch has recently become much easier than it used to be, he’s happy to be the connoisseur of the kitchen.

Trent, who came to the Sanctuary through Best Friends’ community cat program, has his share of aches and pains. But the pain he used to have in his back wasn’t just an ordinary, age-related ache. It was so bad that Trent couldn’t jump up onto his bed on the dryer (or anywhere else) and he often stayed in one spot all day, rather than moving around freely.

Because he’s also prone to getting ulcers in his mouth, it hurt just for Trent to eat. He couldn’t do the basic things he enjoyed doing, which was certainly no way for the senior cat to spend his golden years. So Cat World caregivers and vet techs decided to try a therapy that might help him — laser treatments. And, thanks to a portable laser machine, Trent doesn’t even have to go anywhere to get the treatments. He can stay right where he is.

Understandably, when Trent first saw the odd-looking machine, he didn’t know what to make of it. The portable laser, which has a wand that looks a bit like the ones on ultrasound machines, is housed in a black box about the size of a home printer. At first, Trent wanted to run away when he saw it. But he soon discovered that the laser wasn’t going to hurt him. In fact, it’s been making him feel a whole lot better.

Now, the handsome black-and-white cat seems entirely comfortable with the process and sits patiently while vet tech DeLynn Brainerd moves the laser up and down his back for about two minutes, spending a little extra time on the sore spots. Although the relief Trent feels isn’t instant, these sessions have helped him regain his mobility. He’s now able to jump up on counters and cat trees, just like he did when he was a much younger cat. 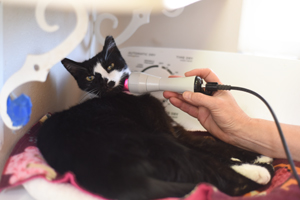 Since late March, when his treatments began, Trent has been enjoying greater independence, and he can now roam freely around the lobby at Morgaine’s. But it’s pretty clear that his favorite part of his two-part laser therapy is the one that’s helping to heal his sore mouth. Trent finds the laser warm and soothing on his face, and he’ll rub his chin against it and purr happily.

Now that Trent can eat his own food much more comfortably (along with a small bite of everyone else’s), he’s not losing weight anymore. And, although the laser treatments can’t cure him or turn him back into a kitten, they sure can make him feel younger and healthier, and help get him back up to speed.

To bring hope and healing to more animals like Trent, support our work.