If you think working directly with animals is the only way to volunteer for Best Friends — think again. In fact, as Hillary Barker proves, you don’t even have to live in the U.S. 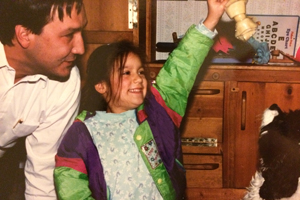 Hillary has loved animals from a very young age and has volunteered at various shelters and rescue groups since she was a teen. But after she graduated from college, the hours she was at work doing market research weren’t conducive to hands-on volunteering. So it was fate when the perfect opportunity arrived in her inbox. Best Friends had a virtual volunteer opening for someone to read and collect studies and data online — something she already did professionally. Plus, it offered the flexibility needed to fit in with her ever-changing work hours.

“It sounded interesting,” says Hillary. “I actually work with data and this position is somewhat similar. I thought it would be cool to see how my work tied into a specific issue I was really passionate about.”

Close to her heart

So for the past two years, Hillary has helped Best Friends business intelligence project manager Kathi McDermott. “By collecting and summarizing national studies and surveys, Hillary provides our staff with reliable information we can use to educate the public and garner support for our lifesaving initiatives,” says Kathi.

The topics she researches include a myriad of animal welfare subjects — everything from volunteering to dog bites, to free-roaming cats. However, of the articles she’s assigned to summarize, there are two topics that really resonate for Hillary. Having volunteered in the past at a shelter that killed animals to make space for incoming pets, she really values articles that showcase ways to get dogs adopted. It’s taught her how something as simple as putting kennels in the lobby to house overflow animals can help to save lives. And because her sister has a pit bull terrier, she knows they often get an undeserved bad rap. Hillary says, “It’s not the breed. It’s just the way they’ve been portrayed.” So she relates to articles that feature innovative ways to get pit bull terriers into loving homes.

Hillary’s volunteer efforts help stock a library of resources that ensure the accuracy of the facts and data distributed by Best Friends. And she does a fantastic job. “Hillary is enthusiastic, dependable, and great at drilling down to the key points of a study,” says Kathi. 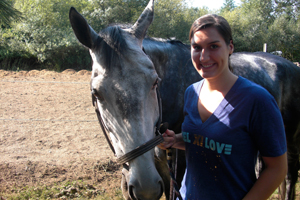 Recently, Hillary’s regular job required a transfer from Boston to London. Normally such a move would uproot someone’s entire life, but not Hillary’s. Since her volunteer efforts are all virtual, she can continue her online work for Best Friends from anywhere.

“One of the best parts about virtual volunteering is I feel like there’s some continuity between what I was doing in Boston and now London,” says Hillary. “I can still be involved in similar things and be a part of one of the same communities, even though the community I live in has changed.”

Her hope is to one day attend the Best Friends National Conference and visit the Sanctuary. In the meantime, since she can’t be hands-on to help homeless animals, her virtual volunteering fills that void in her desire to help Save Them All.