Volunteer couldn't work with kittens, so she made them over a hundred toys instead

Marilyn Mott had visited Best Friends Animal Sanctuary twice before, but her third visit was special. This time, she arrived with a giant bag of handmade toys for cats — 120 to be exact — to donate to the Sanctuary’s cats.

A long time Best Friends member who lives in Salt Lake City. Marilyn is a retired nurse who was hoping to volunteer at the Best Friends Kitten Nursery in Salt Lake City. She took the orientation and training to become a nursery volunteer, but health issues held her back and she wasn’t able to make it in to work with the kittens. That was disappointing, but Marilyn didn’t give up. She decided to find another way to help — something that would combine her lifelong love of cats with a skill she’d been practicing since she was a young girl.

As a child, Marilyn was mesmerized by the sewing machine as she watched her mother making clothes. She bought her first sewing machine when she was in college by paying $15 a month until it was paid off. Now, at age 72, she might not be able to bottle-feed and clean up after neonatal kittens, but she knew she could design a sewing pattern for cat toys and make them, so that’s exactly what she did.

The hand-sewn cat toys are little stuffed mice with various fabric patterns, felt ears and scraps of yarn for tails. “I love fabric,” Marilyn says. “I buy a fourth of a yard of this and a fourth of a yard of that. I can make eight cat toys out of a quarter of a yard.” Once the fabric is sewn into little mouse shapes, Marilyn and her friends get together to stuff the toys with batting and catnip.

It took months to make the 120 toys that she delivered to the Sanctuary, but Marilyn likes doing it. It also helps her cope with insomnia, because it gives her something to do rather than lying awake at night, tossing and turning. “When I have trouble sleeping at night, I’ll get up and make anywhere from 10 to 30 toys,” Marilyn says. 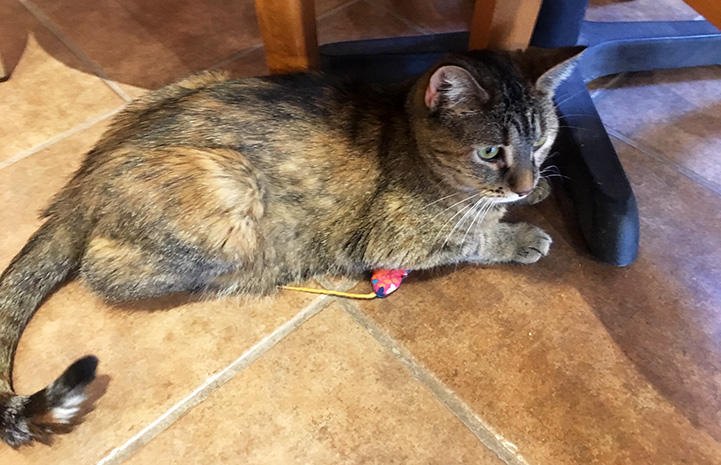 Marilyn wasn’t counting on being able to hand-deliver the big batch of catnip cat mouse toys to the Sanctuary. Last year, she mailed 85 toys to Best Friends, but this year she had a golden opportunity. Eighty-year-old DeAnn Magee, one of the friends who helps her stuff the toy mice, really wanted to see the Sanctuary. DeAnn’s daughter offered to drive her and Marilyn there, so they packed up the cat toys and headed south to Kanab, Utah.

At the Best Friends Welcome Center, the trio met a cat named Cindy who leaped up on the table where Marilyn was sitting and began testing some of the toys. She approved. They also took a Sanctuary tour, ate lunch at the Village café, spent some time at Angel’s Rest and visited the Best Friends Visitor Center in town to check out the kitten nursery there. "The nursery was so great,” she says. “It's just like a baby nursery. There's a window where you can sit and watch what’s happening inside."

Marilyn is back at home now, and back at her sewing machine. In addition to her generous donation to the cats at the Sanctuary (more than 200 toys in total), she’s also made hundreds of cat toys for local shelters and humane societies, as well as Best Friends in Utah. Glenn Pierce, Sanctuary ambassador, summed up our gratitude when he said to Marilyn: “We can't thank you enough for your generosity and kindness. You made these toys with love, and they will make a big difference to our kitties for quite some time.”

Find the best way to help Save Them All 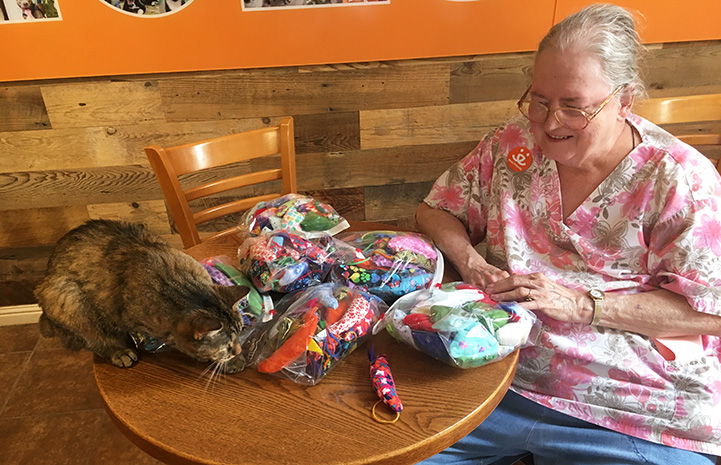