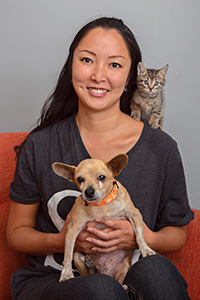 Feeding newborn kittens, helping dogs get healthy and visiting Best Friends Animal Sanctuary: These are a few of Ranko Fukuda’s favorite things. As a longtime volunteer at the Best Friends Lifesaving Center in Los Angeles, she’s has helped so many pets along the way.

Ranko started volunteering at Best Friends after Lily, her beloved dog, passed at the age of 17. “Lily had every issue you can think of throughout her life — from skin issues to a heart murmur, blindness and deafness with age,” says Ranko. “And she was three-legged for the last five years of her life.”

Inspired by Lily, Ranko signed up for a Best Friends foster training session, specifically so she could help dogs with medical issues, including those in hospice care. A few weeks later, a chubby little Chihuahua mix with heart issues named Tubs came into her life. “He was introduced to me as a dog whose future was entirely uncertain because of his ailments,” says Ranko, who stepped up to foster him. With luck, she could change his life for the better. 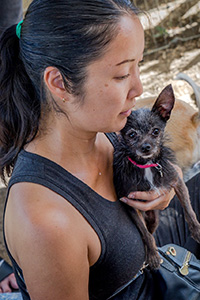 For the next seven weeks, Tubs exercised with Ranko and her 14-year-old dog, Tucker, who loves going on walks. Ultimately, Tubs shed the pounds, which helped his heart health, and when Ranko brought Tubs back to the center, he was like a new dog. He felt better, looked better and had a better long-term prognosis. He got adopted right away.

Over the years, Ranko has fostered dogs of all shapes and sizes, but she has a real soft spot and a knack for helping Chihuahuas. After helping Tubs slim down, she eventually took on a hospice case, a tiny Chihuahua named Spike who eventually made a huge impression on her.

Although she knew when she brought Spike home that he didn’t have much time, she made every day the best she could for him. She held him in a little red carrying sling for walks in parks and in the mountains. “It was an honor to be able to be his last family,” says Ranko. “We sure had some good times.”

As a foster volunteer, she has helped overweight dogs lose weight, underweight dogs gain weight, injured dogs heal, deaf dogs connect with humans and depressed dogs rediscover happiness. And most of them were more than 10 years old, which Ranko says proves that old dogs can indeed learn new tricks. “It’s inspiring to see these dogs come out of their shells and be the best selves they can be in such a short amount of time,” she says. “We should all be so resilient!”

Finding Zen in the kitten nursery 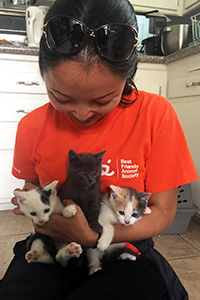 A few months after signing up to foster pets, Ranko decided to try volunteering to take care of kittens. She signed up for the late shifts so she could spend time with her own pets, then drive to the center when there’s no traffic (always a big deal in L.A.). She ended up loving it. “Bottle-feeding fills my soul,” she says. “I consider my kitten nursery shifts therapy sessions. They’re an escape, a respite.”

To Ranko, volunteering in the kitten nursery is a chance to see Best Friends’ no-kill mission in action. “Staff and volunteers rally around the most vulnerable babies who come our way, and when I get to see the sick and injured kittens grow strong and big enough to be adopted, it fills my heart with pride and joy.”

Fostering orphaned kittens is much different than fostering senior dogs or those with medical needs, but both have provided Ranko with some memorable moments. For example, she recently got to meet the people who adopted Antman and Aquaman, two kittens she fostered. They were adopted together about 20 minutes after she dropped them off at the center.

“As with all foster kittens, I was pretty attached to them. They were such fun characters and they definitely lived up to their big names,” says Ranko, who got a little emotional watching a new family fall in love with the kittens. But don’t worry, she’s found a cure for the post-kitten foster blues: more kittens.

After saying goodbye to Antman and Aquaman, she walked back to the kitten nursery and picked up new baby kittens to care for. So far, her plan has a 100% success rate. She’s yet to foster-fail with a single kitten.

“Kittens get adopted quite quickly at Best Friends,” says Ranko. “Each night after I drop off my litter, I check the list of adoptions, hoping to see the names of my foster kittens. That day, seeing the kittens get selected right away was so fulfilling and magical for me.”

An advocate for pets and children

Ranko’s desire to help others extends beyond cats and dogs. She also volunteers as a  court-appointed special advocate (CASA), working with kids in the foster system to advocate for their well-being and help them thrive.

She also helps kids achieve educational goals and works to ensure that their foster home placements are working and that they have a strong support system in place. “Most of all, I get to be a stable presence in the foster youth’s life,” she says. “While foster homes, case workers, attorneys and other adults may come and go, I get to stick around and prove to them that they have an adult to rely on.” 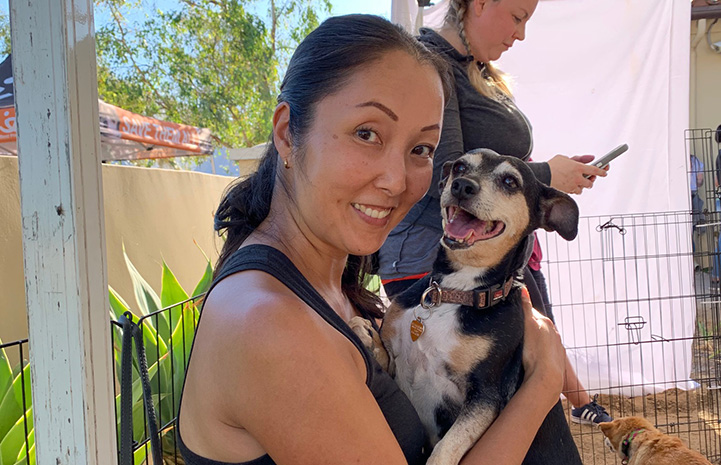 Fostering cats and dogs: a way to keep your pet young

At home, Ranko loves spending time with Tucker, who patiently welcomes new foster kittens and dogs into the home year-round. Tucker is starting to slow down now and has arthritis and early stages of dementia, but his vet says keeping the house filled with other pets will help him stay young.

Ranko also has a calico cat named Jazz, who walked into her life three years ago from the sidewalk in front of her house. Luckily, Jazz isn’t scared of dogs at all, but she’s still getting used to sharing her home with foster kittens.

“I’ve quietly witnessed her allowing the kittens to climb her cat tree and eat her food, so I know she has it in her,” says Ranko, who has recruited friends to volunteer and foster at the center. She also encourages them to visit Best Friends Animal Sanctuary in southern Utah.

“The Sanctuary is my No. 1 preferred travel destination,” she says. “Why sit on a beach and do nothing when you can walk a beautiful dog in the red rocks of Utah, knowing you’re making a difference?” 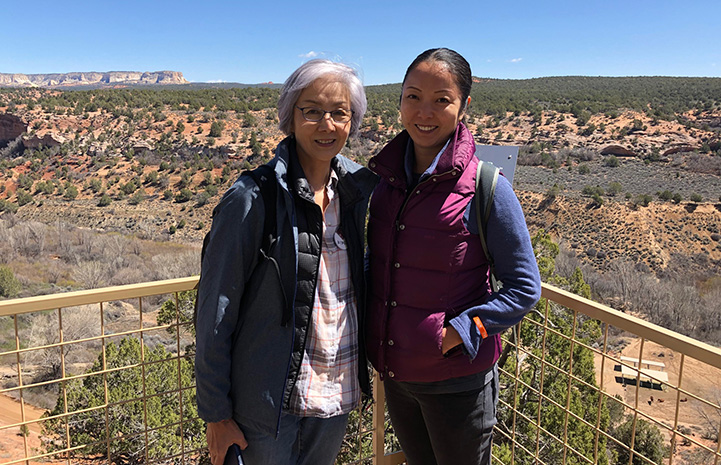 While Ranko finds inspiration in every pet she helps, she’s also moved by the Best Friends staff and has a special fondness for the nursery’s overnight team. “I have learned so much about animal care from them and have watched them do heroic acts in the middle of the night caring for sick and injured kittens,” she says. “It takes special people to work graveyard shifts, and their dedication is definitely a huge inspiration for me.”

Of course, center staff members feel the same way about Ranko. “She is a true definition of an all-star,” says Carina Haro, foster program coordinator. “She is always ready for the next challenge, and she does all of this with a positive attitude and a smile on her face. She is truly a blessing.” 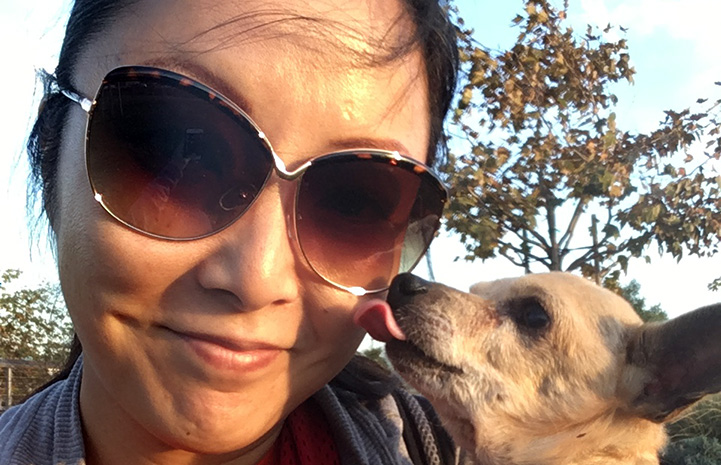 Photos courtesy of Ranko Fukuda and by Lori Fusaro