Way to go, Andrew! (and welcome to the new guys)

Andrew the cat rules the roost over in Sinjin’s, the building that until recently was Cat World Headquarters at Best Friends. As a wise and insightful patriarch to his building, Andrew has simplified the concept of governing the masses down to a single, all-encompassing rule: "All your food belongs to me."

Lucky for the other cats, and thanks to caregivers in the building, Andrew hasn’t quite figured out how to enforce this particular piece of legislation! You see, Andrew, along with the other cats who live at Sinjin’s, is part of the Biggest Loser program for cats at Best Friends.

Helping cats in a community-living situation, which is common at rescues or sanctuaries like Best Friends, is no easy task. If you have a few chubby cats in a room, for example, you can’t solve the problem by putting out less food. If you tried, the shy cats or slow eaters wouldn’t get enough food, whereas some of the other highly food-motivated cats would eat faster. Back when Andrew lived in one of the standard cat rooms at Best Friends, he was infamous for how quick he could wolf down food. 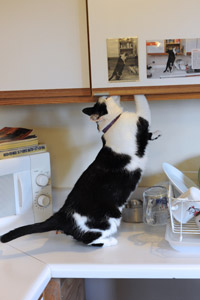 As well, it’s dangerous for a cat to lose weight too quickly. Doing so can cause liver damage. As a result, weight loss in cats needs to be monitored closely, both by measuring food amounts carefully and through regular weigh-ins.

Accordingly, the Biggest Loser club for cats began at Best Friends. In Andrew’s building, six cats can all be watched closely and given measured food portions. Each cat is fed separately, so caregivers know exactly how much the cats are eating. Further, caregivers do all they can to encourage physical activity.

The weight loss process, by design, can take a long time. In Andrew’s case, he entered the program a little less than three years ago, weighing in at 18 pounds. Now, however, it’s time to break out the bubbly and celebrate. Andrew just recently reached his target weight of a little over 12 pounds!

In other words, this highly capable food sneak managed to lose 6 pounds despite his best efforts to thwart the program. For perspective, that’s like a 250-pound human slimming down to around 167 pounds. He looks great! Andrew will need to remain in the program until he’s adopted. If he had access to communal food, those pounds would come right back.

At the other end of the scale, no pun intended, are two new cats in the building (and hence, in the program) who’ve also ended up best buddies. Hiawatha moved in from one of the other cat buildings at Best Friends when a spot opened up in the Biggest Loser club. A bashful cat at first, he tried to avoid the other cats in the room, especially Andrew, who has a knack for invading personal space a little too often — you know, when he’s trying to enforce his one and only rule in search of snacks! Whatever the reason, Hiawatha stayed reserved the first little while. 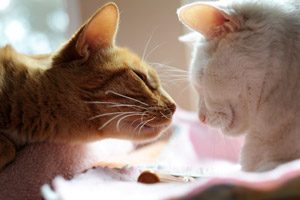 A couple weeks later, Yukichan came to Best Friends (and into the Biggest Loser program) when his person passed away. He took a couple days finding his own way in the building, and then decided to pay Hiawatha a visit. Yukichan hopped right next to Hiawatha and stayed close by. It was obvious Yukichan wanted to be Hiawatha’s friend, and that was that. "Yukichan brought him right out of his shell," explains cat staffer Robin Jackson. "Ever since then, Hiawatha doesn’t hide anymore. He seems so much more content. The difference is amazing."

These days, the pair can usually be found lounging side by side on their favorite window shelf. Now that each cat has found a special friend, they’re much more relaxed and confident, accepting pets with enthusiasm. As an added bonus, they’ll only feel better as they progress through the Biggest Loser program and shed some pounds. Andrew has tons more energy than before, and so will they.

Slow and steady weight loss, that’s the plan. And, as with many goals in life, it’s often easier to achieve weight loss with a friend by your side! The two cats are lucky to have each other. Yukichan will especially benefit from slimming down, as he is a three-legged cat. "The weight loss is going to help him tremendously," Robin says.

Congrats to Andrew, and best of luck to Hiawatha and Yukichan!

is available for adoption! There are also many other wonderful companion animals waiting to go home with you. Click here to check them out!

and help us help more animals in need. Together we can reach a time of No More Homeless Pets!