Image
Best Friends welcomes three new dogs - a Lab and chow mix, a second Lab, and a pitbull. All three are receiving the special help and care they need.
By Christelle L. Del Prete

Moving to a new place where you don’t know anyone can be intimidating. And if you happen to be a dog, who might not understand where you’re going and why, and you might not be feeling your best, it can be downright terrifying.

That’s why Best Friends welcomes new canine arrivals at a special part of Dogtown created just for them. The Sanctuary’s dog admissions area is designed not only as a comfortable landing place for dogs to settle in before they move on to their eventual home-between-homes at the Dogtown area best suited to their needs, it also helps them know, without a doubt, that they’ve landed at a good place.

Rolling out the red carpet for Best Friends’ newest dogs means helping them successfully transition to Sanctuary life, so they’re happy and comfortable, whether their stay is short or whether it takes a bit longer to find a new home. Since every dog is an individual, and many arrive with medical or behavioral challenges, it can mean different things for different dogs. Some dogs need help getting healthy before they move on to meet their new caregivers and roommates. Others need lots of reassurance from staff and volunteers that everything is going to be OK. All of them need an opportunity to show their unique personalities so staff can be sure to place each dog in the area of Dogtown where they’ll be happiest.

The best way to understand Dogtown admissions is to meet a few recent newcomers, each having his or her own unique experience as they get to know us and we get to know them.

When Bull arrived at Best Friends, the big black Lab and chow mix had heartworms, so treating him for that was the first priority. Part of the treatment includes strict cage rest for about six weeks, and his digs at the admissions area are set up to keep him comfortable, even though he wasn’t allowed to be too rambunctious. While Bull couldn’t run and play, he had a nice big room all to himself so he could get plenty of peace, quiet and rest. Since lots of Sanctuary volunteers enjoy helping in admissions, Bull was able to meet new people and go for short walks when he was feeling up to it. He also enjoyed story time with a kind volunteer who would sit and read to him.

Even before his treatment began, Bull’s caregivers were watching him closely to determine what part of Dogtown he’d do best in. A big part of figuring that out is seeing how a new dog feels about other friendly dogs. Dogtown staff tries to get a good feel for what kind of roommates each dog might like when he or she leaves admissions. Some dogs show that they can move in with anyone. Other dogs make it clear they don’t really want a roomie, and that’s how Bull feels. So, teaching him better social skills to help him feel more comfortable around other dogs was added to his care plan. In the meantime, all he has to do is rest and recover from heartworm treatment, while soaking up affection from those who take care of him each day. It’s a tough job, but someone has to do it! 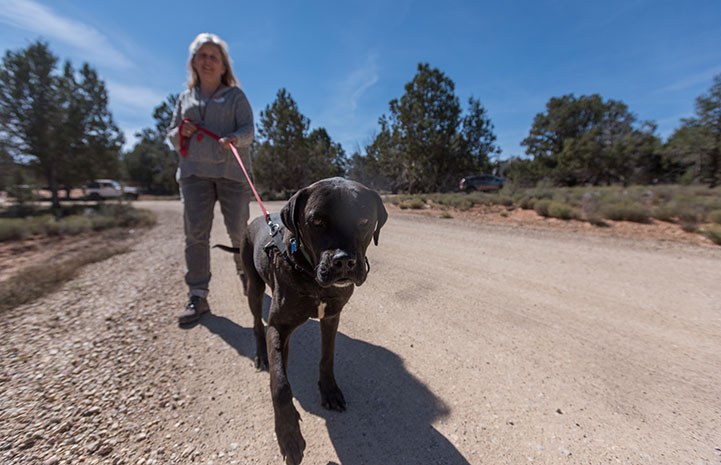 Hooper, also a black Lab mix, has had a longer than average stay in Dogtown admissions, but he doesn’t seem to mind. Originally found as a stray covered in ticks and afraid of people, Hooper’s time at the Sanctuary has already helped him make a lot of progress since we first met him. Though he was successfully treated for a tick-borne disease, Hooper still has a low platelet count. For his safety, he has to wait until his platelet levels come up before he can move to another area in Dogtown.

How is he passing the time? By learning new tricks and gaining confidence. Since he discovered how great people can be, Hooper’s smart, friendly personality has emerged and his caregivers are teaching him tricks, which he loves to learn. So far, he’s learned to ring a bell and spin in a circle on cue. And because he’s had to stay in the admissions area longer than usual, he gets to be the unofficial mascot, hanging out in the kitchen and visiting Dogtown headquarters, where there’s always a lot going on and new people to meet. He’ll never wear out his welcome, though, no matter how long it takes for this sweet dog to feel well enough to move on. 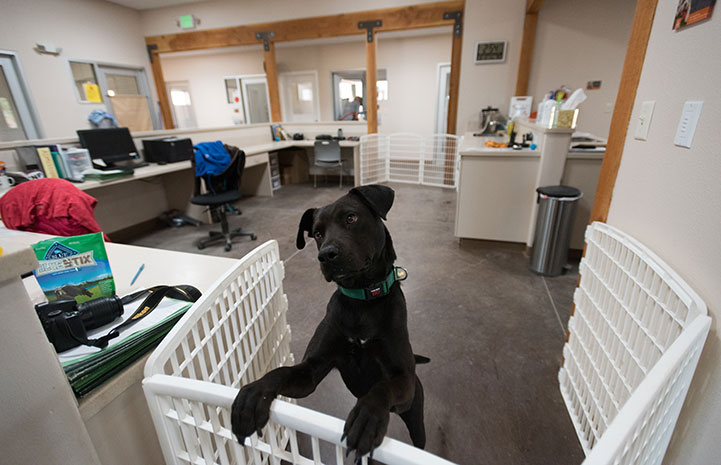 Compared to Bull and Hooper, Isabel, a Staffordshire terrier mix, passed through her stay at admissions like a breeze. Before coming to Best Friends, Isabel had lost the only home she’d ever known. Understandably, she was pretty stressed out when she first came to the Sanctuary. But it didn’t take her long to realize that she was in a safe place and her caregivers were there to help her.

“We really try to figure out how to make the transition less stressful for each dog,” explains Dogtown caregiver Kathy Moore. “For some dogs, that may be just learning how to walk on leash or finding their way around the trail.” Sometimes, that’s really all it takes.

What did it take for Isabel? Well, if you walked into her room, you would have smelled lavender oil and heard classical music designed specifically for dogs. During her time in the admissions area, Isabel’s room became her own personal day spa, and it certainly helped her. She only called admissions home long enough to make sure she was healthy and ready to move to the place in Dogtown where she’ll stay until she gets adopted. 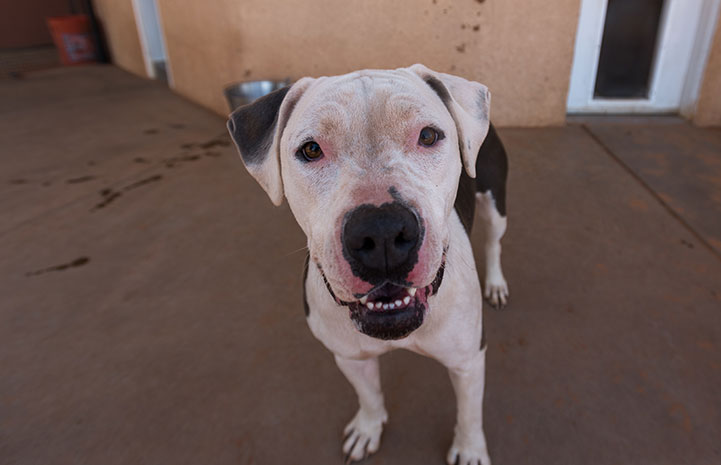 What’s next? Every dog’s journey through Dogtown is a little bit different. Some need continued medical treatment or help losing weight. Others, like Bull, need help with their canine or people skills. Shy dogs get help to become braver. Active dogs can get agility training or learn other fun sports.

And all of them get the support they need to keep moving closer and closer to a loving forever home.