What to do about an attention-seeking cat

Image
Cat could be rude in his needy bid for attention, jumping on people's shoulders or legs. Enrichment, clicker training and more, has help immensely.
By Christelle L. Del Prete 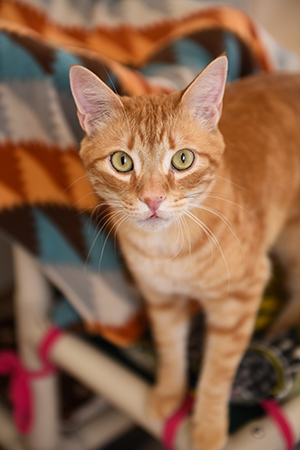 A few months ago, anyone meeting Toulouse for the first time might have asked, “Doesn’t this cat have any concept of personal space?” or “Did he seriously just try to climb me like a cat tree?” When a needy cat meows for attention, uses his claws and teeth to demand an audience, or jumps up onto someone’s legs or shoulders unexpectedly, people might simply assume that cats are rude. But Toulouse is far from it. He’s super smart and learning to channel his intelligence in a positive way has made a big difference in his life.

Cat behaviors and their meanings aren’t always crystal clear. But it wasn’t hard to figure out the reasons why Toulouse was acting out. More important, there were ways to help him make his interactions with people go a lot more smoothly, and to help him be happier at the same time.

Toulouse wasn’t looking for ways to annoy people, and he wasn’t trying to scare or hurt anyone either. He was, however, an intelligent, people-oriented cat who had learned how to get attention for all the wrong reasons.

The four-year-old orange tabby needed some etiquette lessons. He also needed a change of scenery. He’d been living with a Best Friends Network partner in a multiple-cat room, and the arrangement did not suit him.

With other cats around, Toulouse was agitated. While he wasn’t one to start fights, his stress, tension and desire to be the center of people’s attention made him and the cats around him defensive. Toulouse wanted people, not other cats, as his friends. 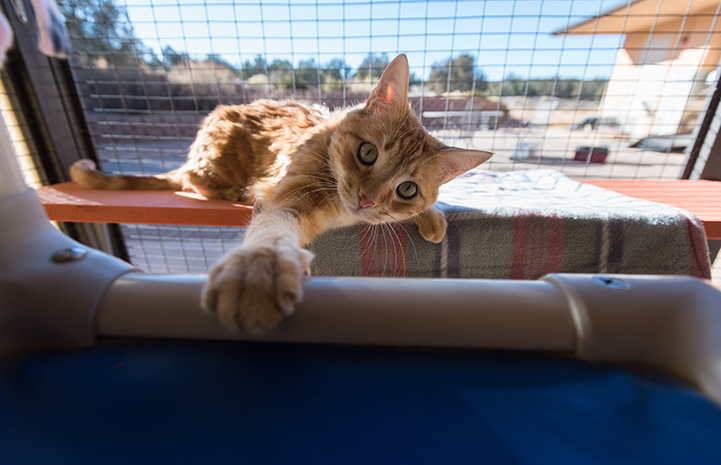 When he came to Best Friends, Toulouse moved into Cat World headquarters. That’s where there are individual suites designed for cats who need to live alone, at least for a little while, to overcome medical or behavioral issues.

Toulouse was happy to finally be the only cat in his room; it was one problem solved. But he had some work to do to prepare for living in a home of his own. Although Toulouse always seemed thrilled whenever someone entered his room, it was never long before he would reach out to grab the person with his paw or give a little “love bite” to ask for more attention. He didn’t like to hear the word “no” and would respond with a quick swipe of his paw. Or he’d press the issue by leaping up onto people’s shoulders, whether he was invited or not.

Because Toulouse has lots of energy and loves walking outside on a harness and leash, his caregivers began taking him for walks on the Cat World trails. Walking is a great way to give cats like Toulouse the physical exercise, mental enrichment and socialization they crave. In fact, it can sometimes help to calm them down and alleviate some demanding cat behavior. Except that Toulouse expected his outings to last until he decided he’d had enough. If anyone tried to steer him inside before he was done exploring, he would lash out and become difficult to handle.

His caregivers took this behavior in stride. They set boundaries and let Toulouse know that when his outings were over, it was time to go back inside — and meowing, biting or swatting wasn’t going to change that. The end of an outing, however, did not mean that his fun was over. 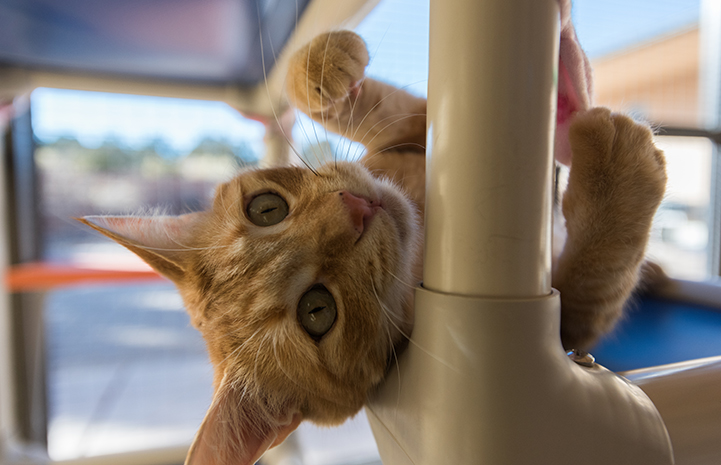 ​Enrichment for an energetic cat

In Cat World, Toulouse has plenty of other ways to channel his abundant energy and satisfy his curiosity. He eats from slow-feeder bowls to help make his mealtimes longer and more enjoyable. His toys are changed out frequently so that he doesn’t tire of them. And he has special catnip mats — clean carpet remnants sprinkled with catnip that he can roll, scratch and play on. 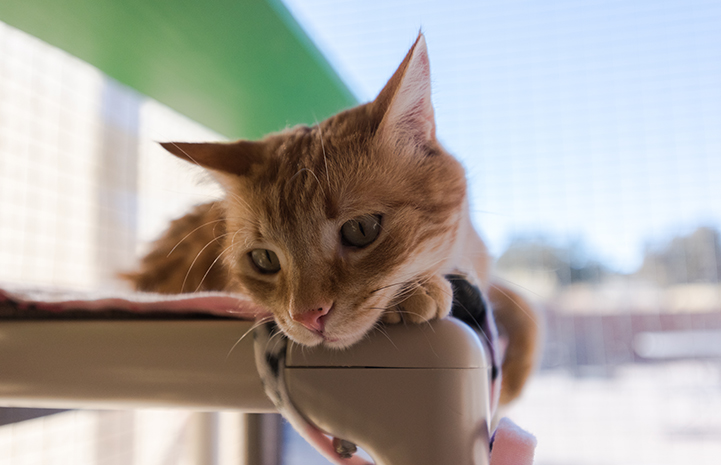 Spending time in the lobby has become a favorite activity, too. After making sure that all the other cats are in their own rooms, caregivers let Toulouse out of his room to explore the rest of the building and run up and down the long hallways.

Toulouse is also learning some new tricks through clicker training with his caregivers. Clicker training is a way to not only exercise his mind, but it can help Toulouse learn more appropriate ways to get attention from people.

For now, Toulouse is learning to touch his nose to someone’s hand for a click and a treat. Eventually, his caregivers will use the same method to teach him a hand signal that means he is invited to jump up on their laps or shoulders. Jumping up on people only when he gets that cue (rather than whenever he feels like it) will help Toulouse get the lap time or shoulder rides that he wants. It’ll also help him make new friends and an excellent first impression.

While Toulouse will probably always crave a little more attention and enrichment than some other cats, he’s learning that being polite gets him far more attention than rude behavior.

Toulouse’s more refined manners are prompting some very different questions from visitors these days. Now, it’s not at all surprising to hear someone say, “Who is this handsome, friendly cat?” or “Isn’t he a smart cat?” And that puts Toulouse one giant step closer to winning someone’s heart and landing a new home. 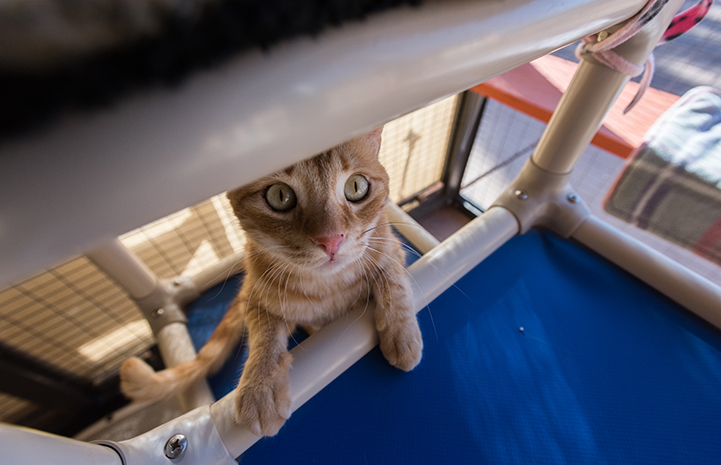