Even amidst all the pre-holiday excitement at Union Square market in New York City last December 18 and 19, there was one particular sight shoppers couldn’t fail to notice: Best Friends’ staffer Holly Sizemore, bedecked in a gigantic cat suit and holding a huge sign to invite any and all to the Whiskers in Wonderland adoption event. Hey, when the stakes are high, you have to take drastic measures to get noticed!

Best Friends teamed up with Mayor’s Alliance for NYC's Animals on December 18 and 19 in hopes of finding a few homes for some well-deserving animals in time for the holidays. Okay, maybe more than a few homes. Everybody was crossing fingers that the event would be a massive hit.

Well, all that planning and effort paid off.

Whiskers in Wonderland, the first holiday adoption event sponsored by Best Friends in New York City, was a resounding success! Resounding, in fact, to the tune of 125 cats, seven rabbits, and one snake who all found homes. Now that’s a Happy Holiday indeed, no matter how you slice it. (As an aside, this adoption event was structured primarily for cats and rabbits, both of whom are perfect for apartment-heavy Manhattan.)

Whiskers in Wonderland was a blast even for people not looking to adopt. There were treats for people and animals, giveaways, entertainment, giant costumed mascots (a dog as well as a cat), agility demonstrations, free advice from professionals — including trainers, vets, and a pet behaviorist — and more. Truly, for anybody who stopped by, there was more than enough to make it worth the trip.

The agility demonstration tent, for one thing, was a crowd favorite. One neat aspect to the agility tent was that shelter cats were used for the teaching. This not only showed visitors how easy training techniques can be, but it gave the various shelter cats a little extra exposure. 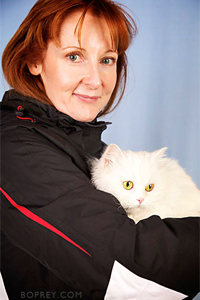 One particular cat, a gorgeous girl named Otto, didn’t exactly choose to play along when she was chosen for agility training demos. Funny thing, though, her reluctance to do as she was asked only endeared her more to the crowd. Otto knew what she was doing, as it turns out. She found a terrific home with a woman who didn’t mind one bit that Otto yawned at agility training. Otto understood that being yourself can pay big dividends!

Aside from all the festivities, the true magic happened as the animals found home after loving home. And nobody had a better front-row seat to all the grinning faces than professional pet photographer Marshall Boprey.

Marshall donated his time to this event, as he has with four other Best Friends events in the past. If anybody adopted an animal, Marshall took a picture for free and gave them a complimentary print on the spot. "I’ve always been a big supporter of adoptions and shelters," says Marshall.

He describes the whole process as memorable and exciting. Virtually every single person who sat down in front of his camera would smile ear to ear. He remembers one small girl in particular (pictured) who posed with her new best friend. The joy on the little girl’s face as she held the newest member of her family was palpable, and representative of so many other happy endings during the two days.

One such happy ending, however, Marshall describes as "101% unexpected." To set the backdrop, the only cat Marshall had ever had in his life was during childhood. This was a community cat who came to his family for food, but would never let anybody touch him. Marshall knows not all cats act that way, obviously, but never really felt the tug to adopt one since. "I’ve just been a dog person all my life," he explained. 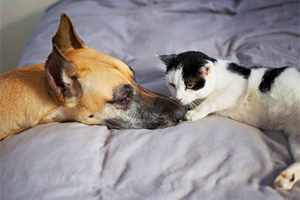 However, after two days of mixing and mingling with all the beautiful, playful cats and seeing the constant stream of happy endings, he began to wonder if there might be a cat there for him. It turns out there was. Domino, a black and white domestic shorthair from one of the shelters in attendance, captured Marshall’s attention from the start. Domino would roll on his back for petting, and rushed to greet Marshall every chance he could. He decided to adopt.

Back home, Domino didn’t waste a minute in making friends with Marshall’s great Dane, Liberty. Marshall had feared those two might take time to form a friendship, but it was an instant and mutual attraction. This 13-pound cat and 120-pound dog are now completely inseparable. "You couldn’t ask for a better pair," explained Marshall.

Search for your new forever friend among our great adoptable animals.