Why one good pit bull terrier mix deserves another

The Brewer family absolutely loved its pit bull terrier, Bella, who they adopted as a senior from Salt Lake County Animal Services (SLCAS) in Utah. And when Bella recently passed away without much time for the family to prepare, the family wanted to take some time before adopting another dog, thinking that they’d know when the time was right.

That day came when nine-year-old Sophie Brewer saw a photo of an enormous seven-year-old brindle dog with big brown eyes and an even bigger smile on the Pit Crew’s page of the SLCAS website. Sophie didn’t waste any time showing the photo to her dad Chuck and stepmom Shelley. As far as she was concerned, he was as good as adopted. In fact, she already picked out a new name for him: Goliath. It was a fitting name that adequately describes his physique, his larger-than-life personality, and the big role he’d play helping Brewer family members open their hearts again to another big dog. 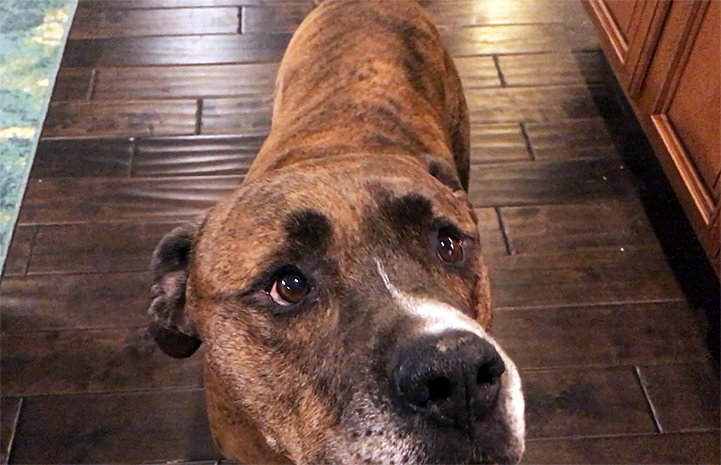 Big love for a big dog

Chuck decided the next step would be to have the family, including their little dog Fenton, meet Goliath in person. They learned that Goliath was spending the day at the Best Friends Pet Adoption Center in Salt Lake City, where SLCAS, a No-Kill Utah partner, each week brings dogs to meet potential adopters.

To be diplomatic, Chuck suggested that Sophie also consider a couple of other dogs at the center that day. But as soon as she saw Goliath that plan was nixed.

Goliath was sweet and kind to the whole family, including Fenton, who showed Goliath he fully intended to remain dominant dog in the house. Goliath gladly obliged. Of course, his demeanor didn’t surprise anyone at the Salt Lake County shelter where he’d spent most of his time, because from the day he was brought in as a stray, he was nothing but sloppy kisses.

“He had a great personality right from the beginning,” says Kiera Packer, SLCAS program coordinator. “He absolutely loved treats and would pull out all the tricks he knew to impress you and get one. He loved hanging out in the yard with staff and volunteers, just soaking up sunshine and attention. We knew he would be a wonderful family member if someone would just see past the fact that he was seven years old and give him an opportunity to shine.”

Goliath’s age didn’t concern the Brewers one bit. In fact, it worked in his favor. “We wanted to adopt a senior dog because we know seniors can have a harder time finding a home,” says Chuck. “They just seem grateful.” 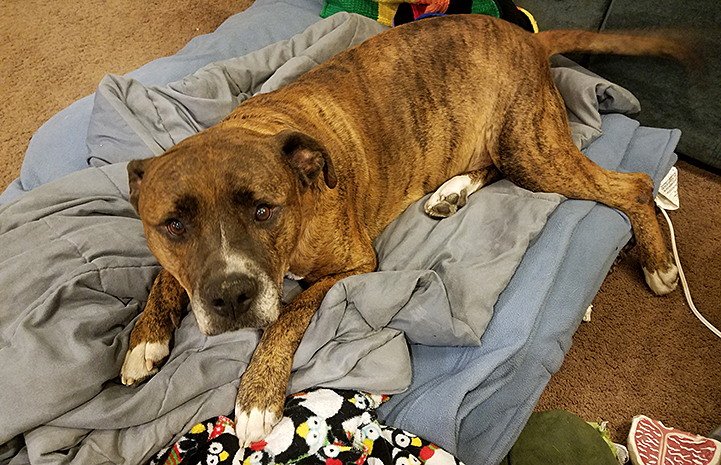 A clumsy, but loveable big dog 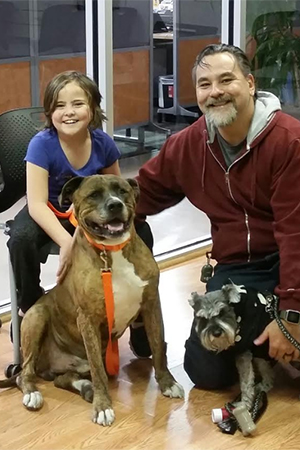 Goliath has proven to be the opposite of Bella — something that makes the Brewers smile. “Bella was sort of the grande dame of the house. She was very motherly,” says Chuck. “But Goliath is very casual and laid-back.”

Chuck has a pet cam in the house so they can watch the dogs while they’re away. But in Goliath’s case, camera time has proven to be a literal snooze fest. “When you’re around, he just wants to be with you,” says Chuck. “But when we’re gone, he just goes to sleep.”

One of Goliath’s most endearing traits is his lack of spacial awareness. He’s just naturally clumsy. In fact, it took a lot of patience and even more treats before Goliath could figure out how to use the doggie door that Chuck installed. He loves to flop onto beds, and when he walks down narrow hallways, he likes to lean his entire 90 pounds on the person walking next to him. But as for the clumsiness, Goliath gives a big “whatever.”

Life is for making friends, and when this pit bull terrier mix meets a dog who doesn’t feel likewise, it makes him sad. “He lets out a moan that sounds like he’s asking ‘why?’ says Chuck. “He gets a little depressed when he meets a dog who isn’t friendly.”

Goliath has managed to step up in a big way to help the Brewer family let go and find joy again with another big dog. And they’ve given Goliath something big that he really needed, too: a loving home.

“I’m always so thrilled to get updates about Goliath,” says Kiera. “The family gave Bella an extraordinary life, and I have no doubt that Goliath is exactly where he is meant to be.” 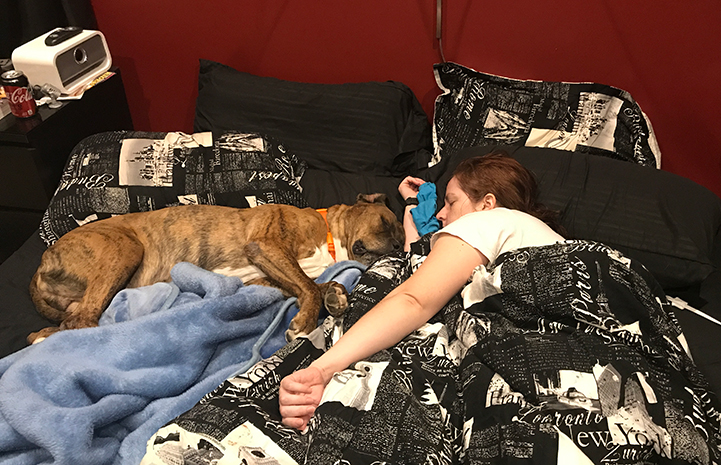