Why two pigs are better than one

Image
Pigs are happier, healthier and better behaved with people when they live in pairs or groups and have good, stable friendships with other pigs.
By Christelle L. Del Prete

Take a tour of Marshall’s Piggy Paradise, and with very few exceptions you’ll see pigs living happily together, either in a pair or in a group of pigs. It’s no coincidence. Like people, most pigs are happier and healthier when they have good, stable friendships and time to socialize with their own kind. Pigs living with pals not only enjoy the benefits of same-species friendships, but they tend to have better relationships with people, too. And that makes their lives better all around. 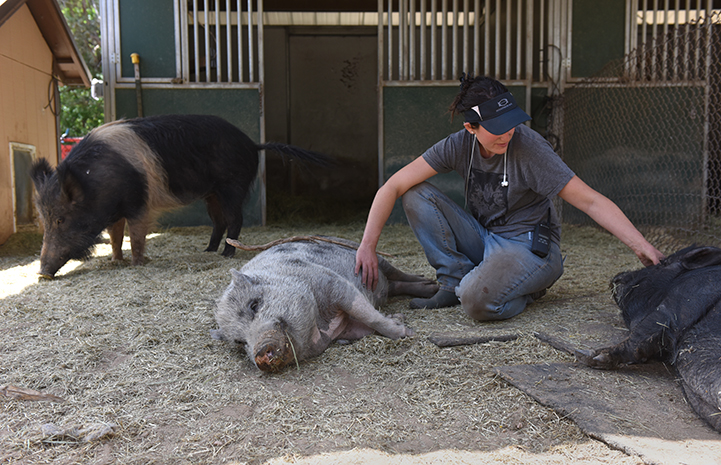 The staff at Marshall’s Piggy Paradise know a thing or two about how to take care of pigs and about their behavior. Every pig brought to the Sanctuary receives medical attention, a high-quality diet and assistance overcoming any behavioral challenges. There’s also plenty of enrichment — things like food puzzles and clicker training — to keep life fun. Because pigs are social animals, they are given the chance to make friends with other pigs as part of their enrichment. For some pigs, this opportunity may be the most life-changing one of all.

“A piggy pal is one of the best things we can give to pigs at the Sanctuary,” says caregiver Rosalie Wind. “That’s because, no matter what changes are taking place around them — such as new pigs arriving at the Sanctuary and others leaving to go to forever homes — the pigs have each other while they are here. Also, those pigs who’ve never lived with others learn how to get along with other pigs, which will make it easier for them to get adopted.” 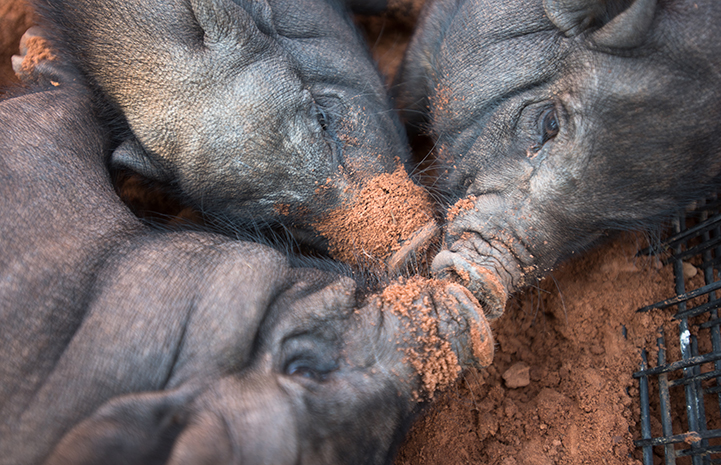 How do pigs behave when they live alone?

Often, pigs coming to the Sanctuary after living alone for all or most of their lives don’t know how to get along with others. For them, learned behavior (the kind they can only get from other pigs) is lacking or nonexistent. As a result, some single pigs become destructive in their homes or show inappropriate or aggressive behavior that may include biting people.

“In my experience, pigs who don't have the opportunity to regularly interact with their own species may start having problems with people,” says Jen Reid, manager of Marshall’s Piggy Paradise. “It seems to happen because what is normal pig behavior and is OK to do with another pig (such as posturing and challenging for dominance) is not OK to do with humans. Additionally, humans often tend to unintentionally reinforce the undesirable behaviors and allow them to escalate to the point where the pigs become aggressive.” 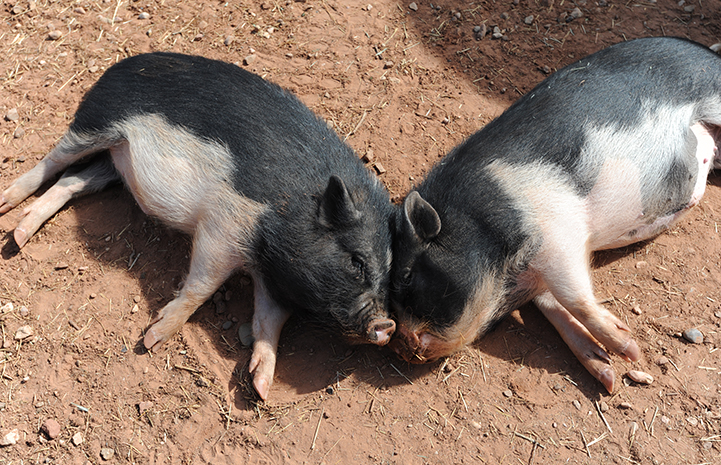 Caregivers at Marshall’s Piggy Paradise work hard to introduce pigs successfully, to create successful groups and to foster (but never force) friendships between and among the Sanctuary’s pigs. Like human friendships, some piggy friendships happen quickly and naturally, but others take time and develop slowly. Some pigs may never be best buddies but can peacefully coexist, while others can be a bit choosier about their friends.

Though there are exceptions, it’s rare to find a pig who doesn’t want companionship or can’t benefit from it in some way. Here are just a few of the success stories at the Sanctuary. While these pairs all live in groups that include other pigs, their special friendships show us why having a buddy makes life better for so many pigs. 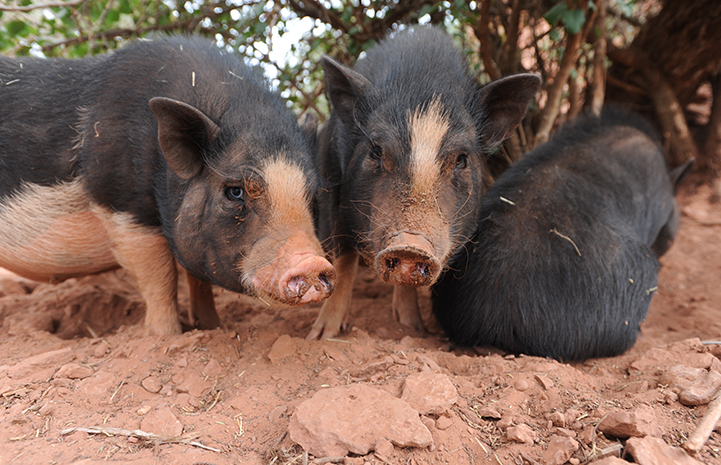 The yin and yang of pig behavior

Diesel had a loving home until he was four years old. But as an only pig, he had no clue how pigs communicate with each other. He also didn’t have any people as role models, so when he started using his teeth to ask for attention, it earned him a reputation for being aggressive. When he came to the Sanctuary, he got a crash course in socialization, which included meeting other pigs and learning how to get along with them as well as with his caregivers.

While it didn’t happen right away, Diesel found his perfect friend in Moe. Theirs is a friendship that just goes to show that even in a pig’s world, opposites attract. While Diesel is assertive and wants to be the center of attention, Moe is quiet and unassuming. It’s fine with mild-mannered Moe if his feisty friend wants to steal the spotlight. 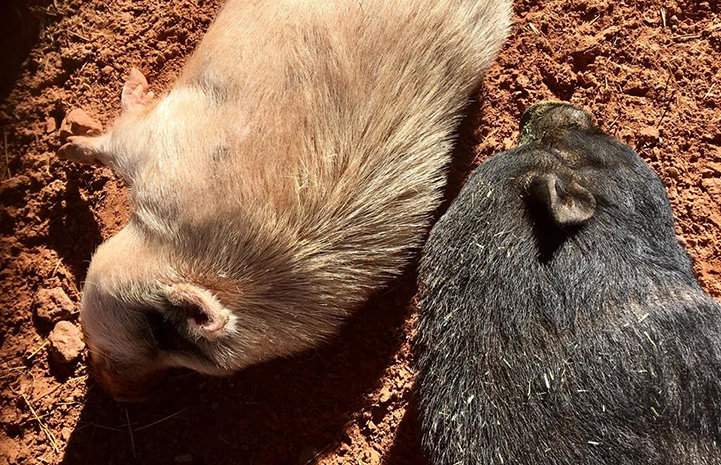 Unlike Diesel, Moe didn’t always have the same stable, loving home. Six years old by the time he was brought to Best Friends, he’d been bounced around a little and had learned to go with the flow. His calm energy helps to balance out some of Diesel’s intensity.

At the same time, Diesel attracts a lot of attention from caregivers and volunteers, and while Moe doesn’t feel the need to be at the center of it, he’s happy to soak up the overflow. In that way, Diesel helps his friend be more social, while Moe models good manners and patience for his spirited friend. 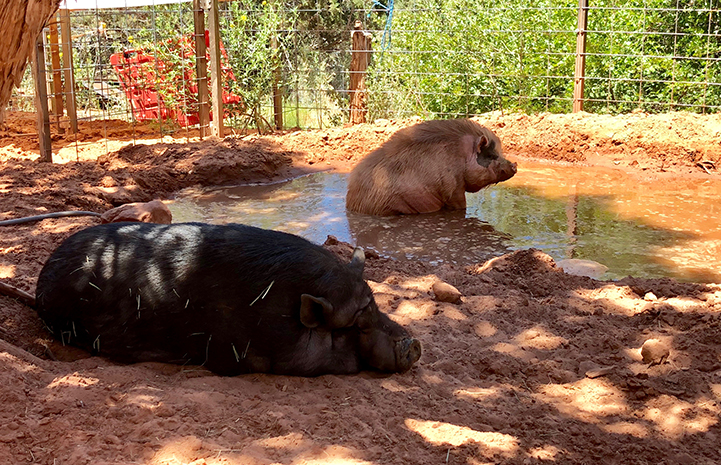 A good sport and a gentle boss

Another well-balanced pair in Marshall’s Piggy Paradise is Roxy and Holly. Holly, a Hampshire farm hog-feral cross, lived with a pig named Nick for years. The two were fast friends, so after Nick passed away, Holly was clearly lonely and looking for another friend; however, because of her size, making friends was challenging. Most of the smaller potbellied pigs found her intimidating. Not Roxy. Though Roxy is much smaller and a couple years younger than Holly, she wasn’t intimidated at all. Instead, she stepped right in to give Holly the companionship and guidance she was missing. 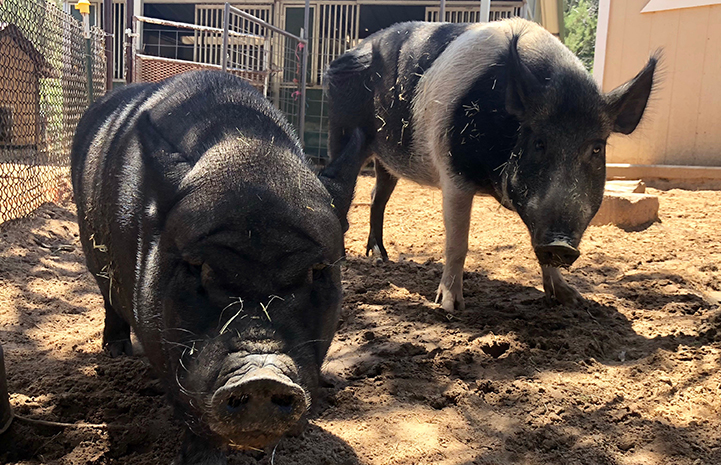 Roxy became the boss in their friendship, which is OK, because she’s a kind and gentle leader and Holly is an excellent sport. Now, the two of them are often seen clowning around, napping and taking mud baths together. Because of their fun companionship, Roxy has earned a devoted friend, and Holly isn’t lonely anymore. 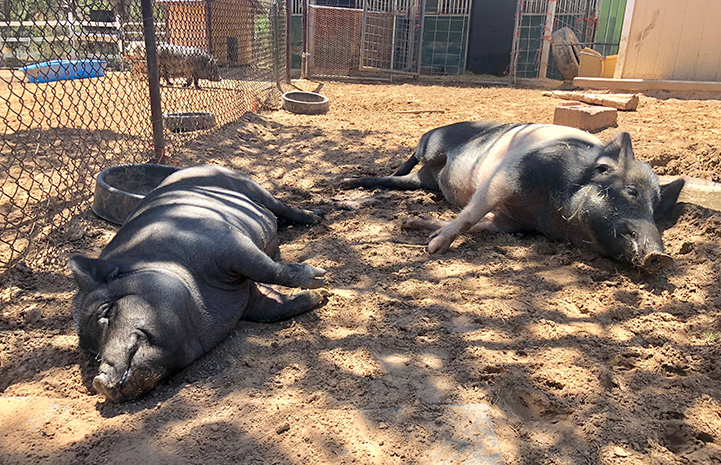 How do pigs communicate? These kindred spirits do it naturally.

While caregivers make careful assessments of pigs’ personalities to decide who to introduce to whom, they didn’t have to work very hard to bring Daisy and Wilbur together.

Wilbur and Daisy each had loving homes, but they came to the Sanctuary when their families could no longer care for them. They arrived six months apart and seemed to be kindred spirits from the start. 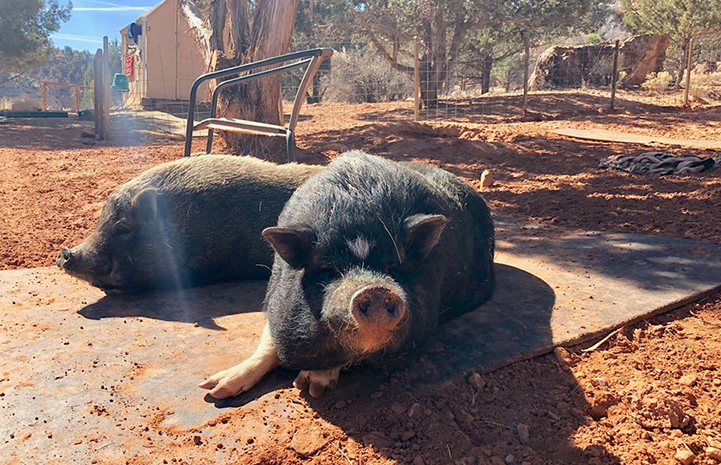 “They became friends so quickly and naturally that we [caregivers] were pleasantly surprised,” Rosalie says. “They just gravitated toward each other from the very beginning and have been together here ever since.”

When they first moved together to one of the group living areas in Marshall’s Piggy Paradise, Daisy began to play “Goldilocks” with the piggy houses. She’d go in and try one cozy house after another, until finally she found just the right fit, curled up and went to sleep. Wilbur looked in each one of the houses until he found his friend and cuddled up next to her. Now, Daisy and Wilbur share their favorite piggy house and are truly two peas — or pigs — in a pod. 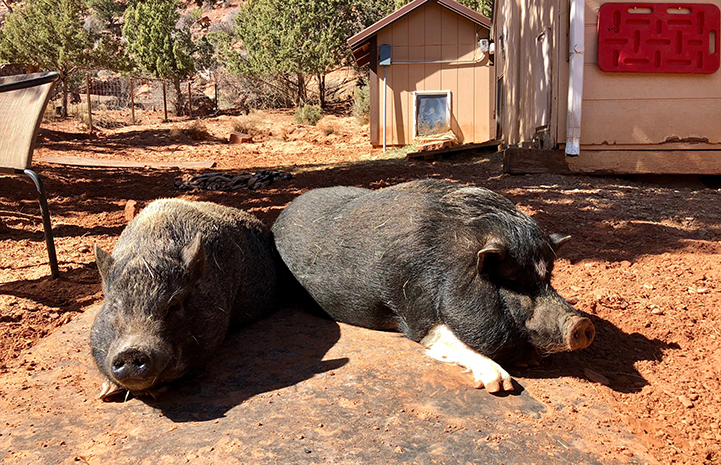 Just watching the behavior of pigs at Marshall’s Piggy Paradise can reveal quite a bit about what makes these sweet, social animals tick. Whether they’re napping in a piggy pile, splashing around in the mud with a pal or just hanging out together in the same space, piggy friendships are more than just fun and adorable. Companionship is key to their well-being, and, just like people, they are happier and healthier when they have good company. 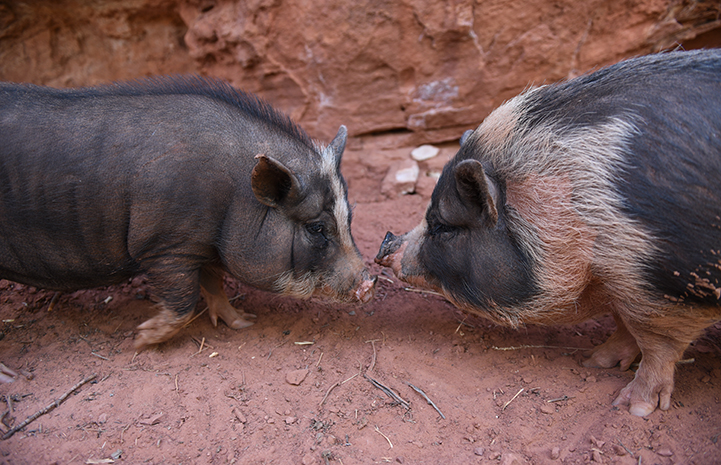