Image
There is a plethora of wildlife at Best Friends Animal Sanctuary near Kanab in Southern Utah: wild turkeys, ravens, deer and more.
By Christelle L. Del Prete

Traveling the Sanctuary’s roads and paths is almost like a visit to a wildlife preserve. The notion isn’t far off, as it sits on over 20,000 acres of Utah desert with its own canyons, streams, meadows and trees. Herds of magnificent mule deer graze alongside the roads at dawn and dusk; they’ve grown accustomed to drivers slowing to a crawl or a stop to watch them and turn a large ear that way — just in case — but rarely bother to run. While the Sanctuary provides a safe haven to approximately 1,600 rescued pets on any given day, wildlife of all kinds are welcome, too. And they seem to know it. 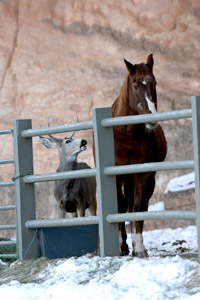 Deer and turkeys frequently pass through Horse Haven, often stopping to share a snack with a horse or to soak up the warm sun that floods the lower canyon at certain times of the day. Firebug, a 29-year-old retired ranch horse, is gracious to these visitors, happy to share his food and water with them. While staff is careful to keep the Sanctuary’s free-roaming wildlife wild, they’ll occasionally leave out special treats for them to find.

The staff at Cat World found an ingenious way to recycle pumpkins after a Halloween decorating contest: They broke them open and left them out for the deer. “They really went for the big pumpkins,” says Cat World team lead Robin Jackson, “but they didn’t like the little ones so much.” Still, the pumpkins – or most of them – got recycled, the deer devoured a sweet snack, and the cats got to enjoy some wild companionship too as they watched from their outdoor catteries.

These wild friends are an integral part of the Sanctuary’s ecosystem, and they were one of the reasons that Best Friends’ founders chose this very special location 30 years ago. Co-founder Silva Battista recalls the time she and co-founder Francis Battista discovered the turkeys’ roosting area in the lower canyon area, near a horse barn. At dusk, as the sun began to dip behind the mountains, the turkeys lined up on the cliffs like bowling pins and then swooped down across the road, and into the cottonwood trees – their flight noisy, yet incredibly graceful at the same time. Over the years, the turkeys’ flights have become an attraction; people sometimes come by just to watch the performance. “Standing in the road and watching them fly over your head is quite extraordinary,” Silva says. 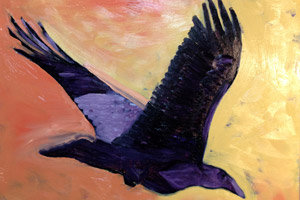 Cyrus Mejia, Best Friends co-founder and resident artist, has a special relationship with the ravens. The birds, black and shiny as onyx, fly from treetop to treetop, sounding their signature caw and sometimes teasing Dogtown residents who try to chase them. The mysterious black birds have engaged Cyrus’ imagination and inspired his art: "Ravens live in all parts of the country, but to me they represent the magic and mystery of the desert. When I first came to Angel Canyon, the ravens captured my imagination and jumped into my paintings. And they've never left!"

Learn more about visiting the Sanctuary.