Adopter provides the play-by-play on how patience and kindness helped her timid cat gain confidence.
By Nicole Hamilton

Fenny’s a sensitive guy. The two-year-old tabby cat takes his time getting to know people and, like many of us, he isn’t much of a fan of change. When he arrived at Best Friends in Los Angeles, he was quiet and shy.

What this introvert needed was a family that could be patient with him while he worked through his shyness and developed the confidence to roam freely about the house. And that’s just what he found when Joanie and Scott Seaton adopted him. 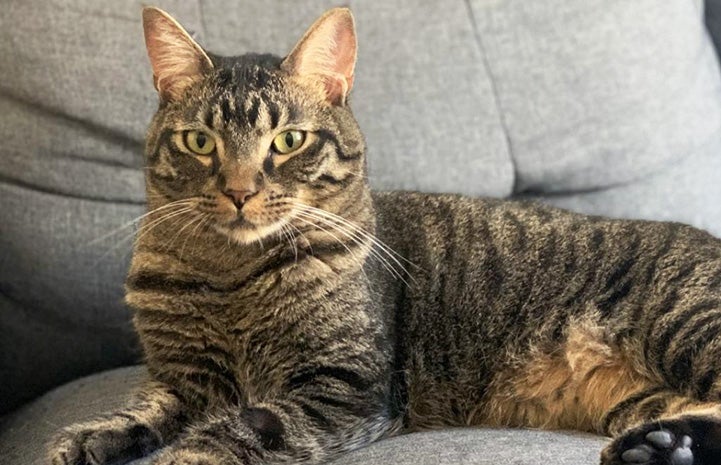 Meeting a cat over Zoom

Fenny wasn’t the only one feeling a little tentative at first. Joanie and Scott saw him on the Best Friends website, and because he was in a foster home, meeting him would have to be done through a virtual meet-and-greet.

Joanie admits that at first she and Scott were worried they wouldn’t be able to make a strong connection with a cat via a video call. “We’re both in our 70s, and we never thought we’d meet a cat over Zoom,” says Joanie. “We figured we’d try it. There was really no reason not to.”

The virtual meeting went better than expected — way better. After talking to Fenny’s foster mom and watching him interact with her during the call, Scott and Joanie were more than ready to adopt him. And that’s just what they did.

Today, Fenny spends a great deal of the day playing and also impressing Joanie and Scott on how well he understands the English language. But all this didn’t happen overnight. They knew from their Zoom meeting that he has a tendency to be very shy. So, they decided to help Fenny overcome his shyness the same way they approached adopting him — with an open mind and some good doses of patience and faith.

Joanie chronicled what happened next in the following update. Let’s just say that Fenny hit the jackpot with his new family. 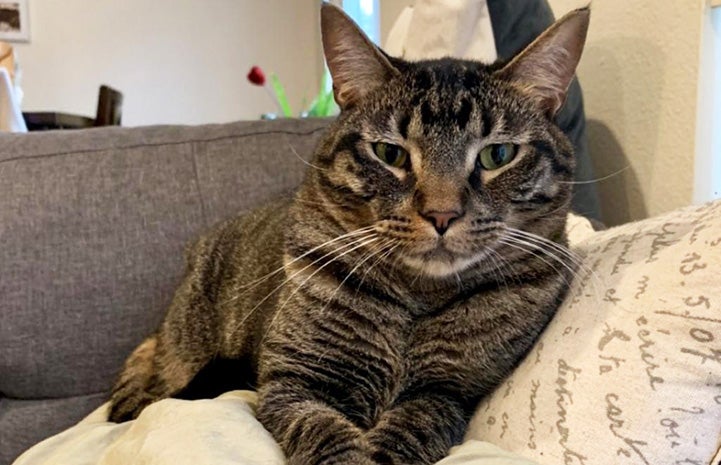 Fenny has inserted himself into our home and our hearts. When we first adopted him, every single day was a new milestone. In the early days with us, he wasn’t eating or drinking, and he did everything possible to make himself invisible. We kept him in a “cocoon,” a small powder room with food, water, a litter box and a couple of our T-shirts with our scent on them to use as bedding.

Those first days were worrisome and we would enter the room quietly and just sit and talk to him. Since I’m working from home, I would take my laptop and phone in with me and just do my work. When we started leaving the door open so he could come out to visit, he was quite tentative, but that was to be expected. Fenny wasn’t going to rush into anything. We’ve had cats all our lives and we knew that our patience would be rewarded. 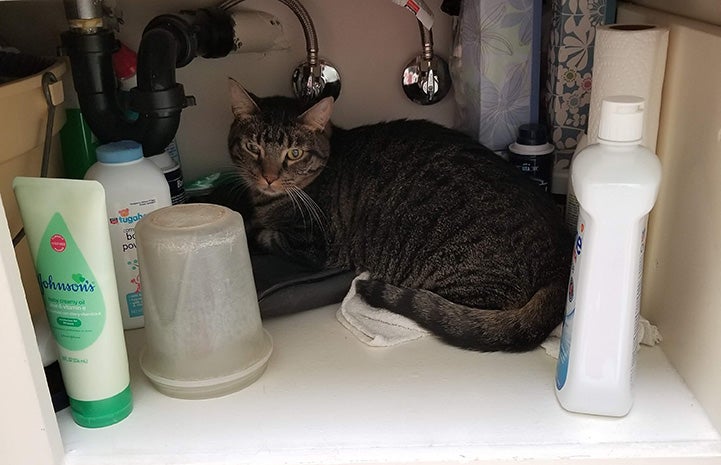 He probably spent five of his first days with us confined. Then he began coming out in increments. We put him back to bed at 11 p.m. and opened the door again around 6 a.m. At first, he didn’t complain about going back to his safety zone, and when he told us he was ready to explore, we gradually gave him 24-hour access to the house — but still with his safety net to run back to if there was a scary noise, like the street sweeper.

I slowly started transitioning him to eating in the kitchen and being a part of both opening the pantry and the ceremony of the meal presentation. We started by offering tiny bits of various foods just to get his appetite stimulated, and he is now on a regular routine. He is the best eater, loves his food and shows us he’s grateful at mealtime with head-butts and tail-hugs. 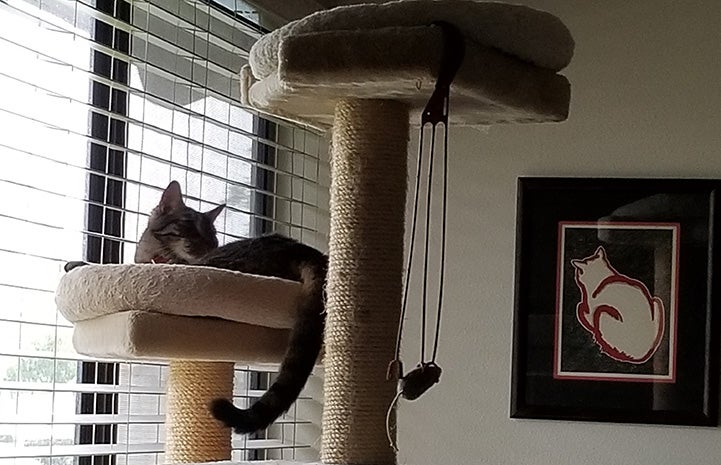 At first, he spent quite a few hours daily inside our bed’s box spring (thanks to previous cats making that possible), but now he’s on the bed most of the night.

Fenny has adapted to our schedule and stays close to me as I work. He turns into a lap cat if I sit down in one place long enough to make an actual lap, usually after dinner. And we play with him by dragging strings, rolling squishy balls and tossing his favorite catnip banana.

We both think Fenny may be the smartest cat we've encountered. Show him something one time and he makes the association with the word. He’s not even had one slip-up with the litter box, even though I moved it a couple of feet each day from the powder room to its eventual resting place. As I said, he is a smart boy.

Now, at least once or twice a day, he jumps up on the bathroom sink and squeaks politely to ask us to please turn on the water and then drinks his fill.

Bottom line? You can't have him back! 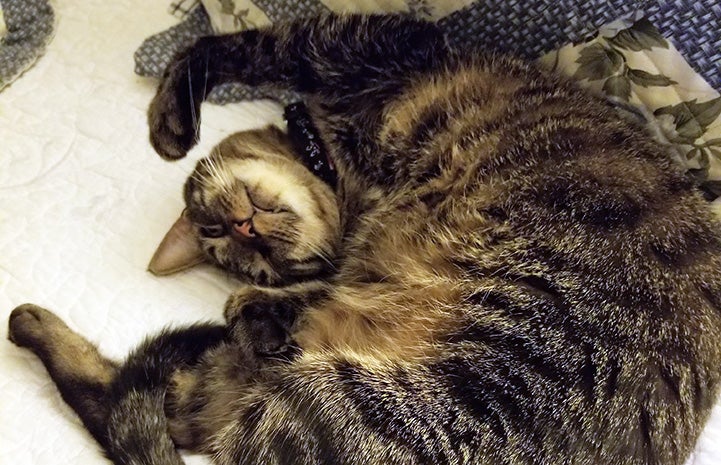 Ready to adopt a cat?

Fenny may be taken, but there are still plenty of cats at your local shelter ready for a home.