When Laura Myers travels to Best Friends Animal Sanctuary in Southern Utah from her home in Dallas, Texas, she knows where she wants to go — Dogtown. Despite the fact that she’s visited 10 times, she has remained loyal and hasn’t ventured away from volunteering with her favorite animals at the Sanctuary — the dogs.

However, during her latest visit, Mother Nature threw her a curveball. Once she arrived in Kanab, Utah, where the Sanctuary is located, it snowed and snowed. And then snowed some more. But that didn’t deter Laura, because once she arrived, she was ready to go.

Jumping in with both feet to play with a puppy 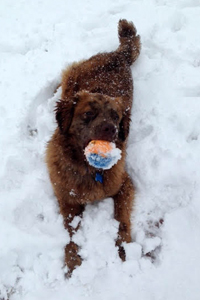 She literally had a ball with Quinton, one of the puppy play school residents. The pair played at the puppy park, where Quinton burned off some energy doing zoomies in the snow. Then, when Laura brought out a tennis ball, playtime was elevated to a whole new level.

Laura threw the ball to the back of the park, but neither she nor Quinton realized that snow had drifted up over a flower bed. So when Quinton jumped for the ball, he landed with a big belly flop. Stunned, he glanced back at Laura with a look that seemed to say, “What was that?” Undeterred, he dove right in to retrieve the ball, and once he brought it back, she tossed it again into the same area. He attempted to recreate the experience, but his initial leap of faith wasn’t to be repeated. Nevertheless, play time continued until they were both dog-tired.

Laura spent the afternoon walking dogs, but, once again, the snow presented a challenge. She couldn’t see the dog trail under the five inches of snow. No worries, because all the dogs knew the way.

“It was amazing to me how well the dogs still knew the trail, even though you couldn’t see any of the markers,” says Laura. “Even in the snow, they knew exactly the path we were supposed to go, and they led me.” 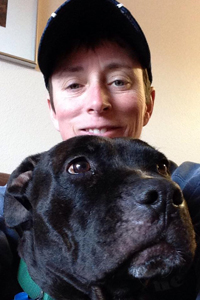 An excellent benefit to frolicking in the cold and snow all day is warming up in the evening with a sleepover dog, and Lordes fit the bill. Back at the cottage where Laura was staying, Lordes immediately jumped up on the couch. This is a dog who enjoys her creature comforts. “She’s a 40-pound pit mix,” says Laura with a laugh, “but she thinks she’s a lap dog.”

Once settled in, Lordes let out a big contented dog sigh, and it wasn’t long before she started snoring. That evening, she made a delightful sleeping companion. “For a snowy night, it was nice to have a good snuggle buddy,” says Laura.

Reigniting her passion for animals

Laura’s efforts on behalf of animals continued when she returned home to Texas. She volunteered to represent Best Friends when the MINI TAKES THE STATES cross-country event made a stop in Dallas. In Houston, she not only helped at Strut Your Mutt, but she was the city’s top individual fundraiser for Best Friends. And all of that is in addition to volunteering for Duck Team 6 Street Dog Rescue, a Dallas-based No More Homeless Pets Network partner.

However, it’s the time she spends at the Sanctuary that really recharges her soul. “Every time I am feeling bogged down in the real world in my real job, which can be stressful, I know I just need to get back and find that passion inside of me that makes me feel good,” says Laura. “I love going to the Sanctuary. That reignites it all over again.”