Image
Cat was becoming reserved and withdrawn while living in a communal cat setting, but now she is blossoming and becoming more confident as a lobby cat.
By Christelle L. Del Prete

Back arched, tail up, Kixie emerges from under a cat tree to sniff the outstretched hand of a visitor. Kixie is friendly but cautious – until she gets some head scratches. Then she decides the person is OK, and leaps up onto the cat tree. Now she’s full-on asking for attention, flashing her pretty gray-green eyes and kneading the soft fabric topper with her delicate little toes.

Kixie wasn’t always this social and brave. Life as a lobby cat has made her this way. The adorable little tabby came to the Sanctuary after she was rescued from a trailer park where she’d been abandoned. She went to live in one of the bright, spacious rooms at a building in Cat World at the Sanctuary. Like most of Cat World’s community rooms, it has ample cat furniture to climb, cubbies to sleep in, and wide, wooden ceiling beams perfect for cats who like to hang out in the rafters. There’s also a large outdoor cattery where Kixie could lounge on warm days, soaking up the sun and watching Sanctuary wildlife fly or stroll by. It’s pretty posh living. But Kixie had a hard time adjusting to it. 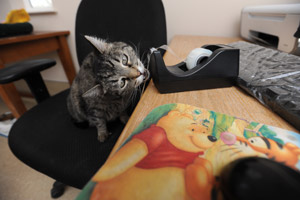 Although she is tolerant of other cats, Kixie much prefers the company of people. She kept her distance from her feline roommates at first, and then began to withdraw from people too. She didn’t seek out affection or engage with them when they entered her room. So her caregivers began letting her out into the lobby for a few hours a day to see if that would encourage her to be more social.

It was a slow transition. At first, Kixie clung to her loner ways and stayed in the small office off the lobby. She’d curl up on a chair and ignore all the visitor tours that came through the building. But then she discovered that the lobby has lots of cool nooks, crannies, and hiding places, and she began using them to watch the action from a safe distance. 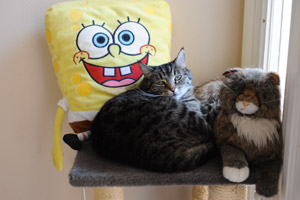 “Usually,” says Michelle Warfle, manager of Cat World, “cats that don't thrive in community rooms do a 180 when they start living in the lobby.” And so it went for Kixie. Since leaving her room and venturing out of the office, her world has opened up. She’s become a full-time fixture in the lobby and has lost her wariness of people. With her newfound confidence, she now has no problem befriending visitors. And, because few people can resist her purrs or the adorable little tufts of fur on the tips of her ears, she gets all the attention she wants.

Although she sometimes still retreats into the office, it’s usually when caregivers are there working at the computers. Then she’ll jump up in their laps and make herself comfortable. Life as a lobby cat definitely agrees with Kixie. It’s helped her feel comfortable and much-loved – on her terms. And that’s what it’s all about.

Learn more about all the cats at Best Friends.