Wobbly kitten is perfect just the way he is

Image
Little kitten wobbles when he walks because he has cerebellar hypoplasia (CH for short), but he's perfect just the way he is and has been adopted.
By Nicole Hamilton

Westley might wobble when he walks or take a tumble when he tries to climb up the cat tree, but ask people at the Best Friends Lifesaving Center in Salt Lake City to describe the two-year-old cat and you’ll hear them say the same thing: “He’s perfect.”

Westley came to the center’s kitten nursery along with his mom, Keiska, and three siblings when he was just one day old. Since the best place for a nursing mom and her kittens is a quiet home, the staff at the center reached out to foster volunteer Judy Steiger, who didn’t hesitate to take in the entire crew.

After a couple of weeks fostering, Judy noticed that three of the four kittens wobbled when they walked, and their heads bobbled so much that she had to hold them still so they could eat. Concerned, Judy brought them back to the center so the medical team could take a look at them.

The cause, they determined, was cerebellar hypoplasia (CH), a neurological condition that occurs when a kitten’s cerebellum doesn’t fully develop in the womb. Since the cerebellum is what controls motor function, cats who have CH tend to wobble when they walk.

“Their brain and legs don't communicate well,” says Danielle Barnhart, an adoption specialist at the center with an affinity for helping cats with CH. “CH doesn’t affect the quality or longevity of their life. It doesn't really get any better or worse, and there are no medications that will help.” 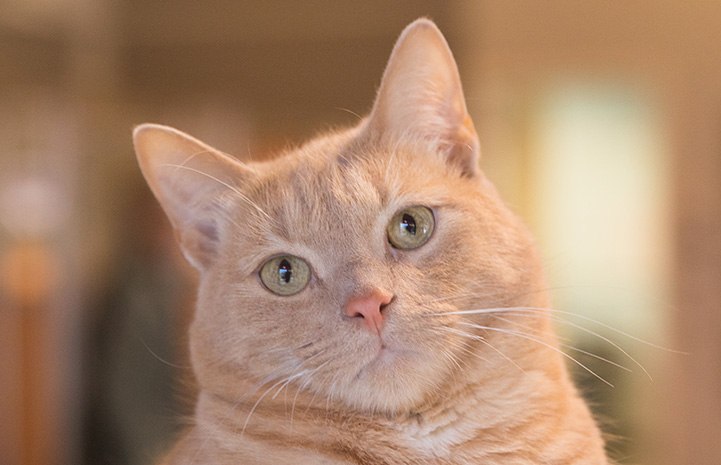 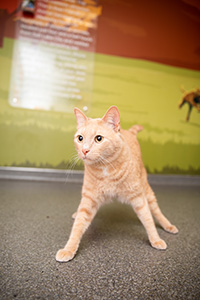 Armed with the knowledge and support she needed to continue caring for the kittens, Judy brought them back to her home, where over the course of the next few months she helped the kittens grow strong and healthy. She bought a special litter box that they wouldn’t have to step into, and she kept them in safe kitten-proof rooms.

When it was time for mom and her four kittens (including Westley) to be adopted, they came back to the adoption center. Keiska and Westley’s siblings were adopted quickly, but it took a little more time to find a home for Westley, who is on the higher end of moderate on the CH scale.

To help him feel more comfortable while he waited, the team outfitted a large dog crate with potty pads around the litter box and a soft bed, as well as food and water bowls attached to the crate so he couldn’t knock them over.

Occasionally, the team would let Westley spend some time in the free-roaming kitty room, but it wasn’t an ideal location for him because he’d end up tumbling into the other cats, and some didn’t appreciate this about Westley. But he loved his kennel, and since it was up near the front of the center, he received plenty of attention from staff and visitors.

“He won over the hearts of everyone he met,” says Danielle. “Cats with CH are easy to fall for. They are just so inspiring, how they literally always get back up when they fall. It sounds silly, but it's true.” 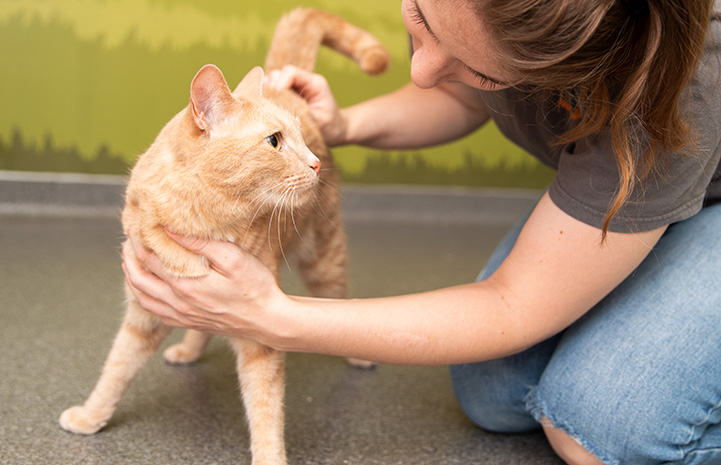 Finding the right home for a cat with special needs

Westley did indeed capture plenty of hearts while at the center. In fact, he was adopted a couple of times, but each time, things didn’t work out and Westley came back. 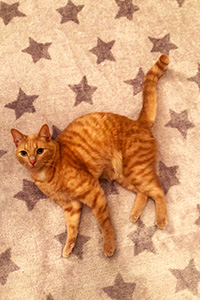 Still, the adoption team never lost hope that Westley would find an adopter who, like them, thought he was pretty much perfect. Little did they know that person had already been to the center and was just working up the nerve to meet him.

Alea Kritzer and her boyfriend, Cole Horrocks, had been coming by the center throughout the year to play with older cats. Alea had always wanted to adopt a cat with special needs, and one day at the center she asked to meet Westley.

“I always noticed Westley in the front of the lobby in his crate; however, the day we adopted him something was different,” says Alea. “I gained the confidence to ask about the little guy to see if he could come out for some playtime. The instant I saw him out of his crate I fell in love. He has the cutest face and sweetest demeanor.”

Alea was familiar with CH and aware of Westley’s needs. And while she was confident she could provide him with the ideal home where he could thrive, she says Cole was at first a little hesitant to adopt Westley. A little pep talk from Alea was all he needed, though, and after spending time that day playing with Westley, they both agreed that adopting him was the best next step.

Room where a cat with CH can thrive

Alea and Cole gave Westley his very own room across from theirs. That way, he could comfortably use the potty pads in an open space while he adjusted to his new environment.

Using the litter box can still be challenging for Westley, and Alea has found that potty pads work much better. To help him get used to a designated spot, she put away all the rugs in the house so he could get used to using the pads in the same spot on a regular basis. “We were warned that rugs could potentially be used for something we didn’t want them used for,” says Alea, “and we learned that the hard way.”

Fortunately, at the top of their staircase is a door that they can keep shut when Westley is upstairs, so he doesn’t tumble down the stairs. 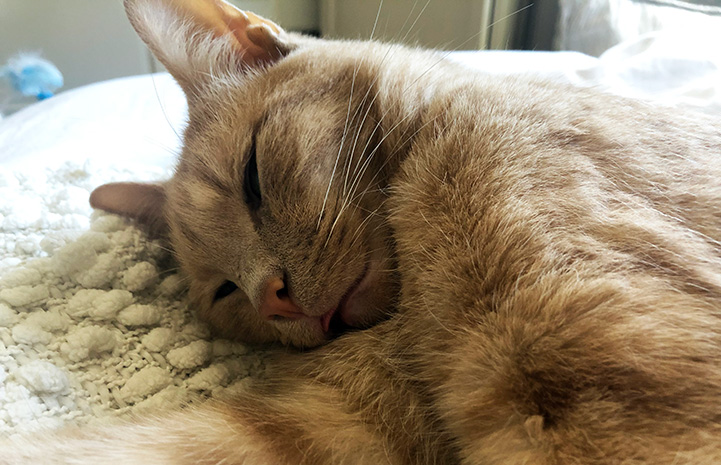 Westley loves sleeping with Alea and Cole, and now he can climb into bed with them relatively easily. But he had to work hard to master this skill. At first, he’d grip the blanket with his front claws and hoist himself up with help from Alea and Cole.

Feeding time presents another challenge because Westley is particular about how he likes to eat. “He pecks one bit of food at a time off the floor and doesn’t like to eat it straight out of the dish because it’s harder for him to eat his small amounts,” says Alea, who has adjusted to always having cat food on the floor.

She and Cole have also gotten used to letting Westley have the entire bed to himself when he is ready to play. Sometimes he gets so excited to play that he loses control of his body. By having the whole bed to himself, he can move around and not get hurt.

Westley doesn’t know he’s a little different, and Alea says he’s stubborn. “To be honest, Westley hates help,” she says. “He loves to do everything on his own and is extremely capable. He’s determined to do anything other cats can do.” 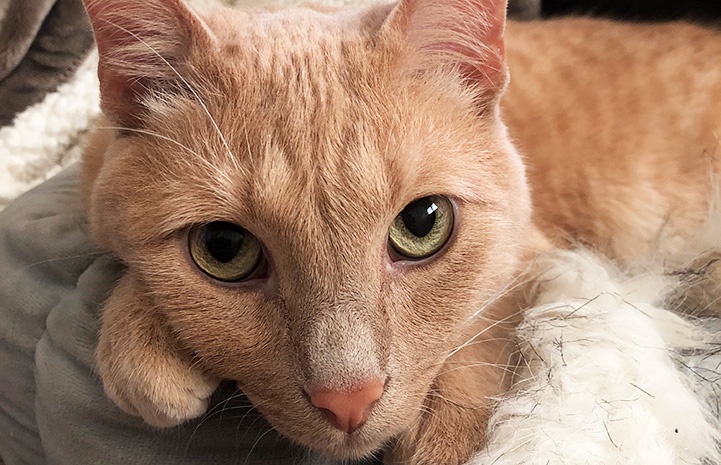 Life is better with a cat

Alea says life has changed drastically for her since she adopted Westley (and in the best ways possible). He’s her favorite companion (don’t tell Cole), and he wins her heart a little more each time he learns she’s in a different room and adventures over to be with her. It’s a process that can take few minutes.

“I am now more prepared for a real baby,” says Alea. “That’s what I compare to having Westley. It has been a large commitment that I have not regretted for a single second.”

Now, just like the team at Best Friends, Alea uses the word “perfect” to describe Westley. “Changing his potty pads, scooping up his food into a small pile so that it’s easy for him to eat and always having eyes on him — these are all things that have come with him. But that’s what makes Westley his perfect little self.”

Adopt a perfect cat near you

Best Friends in Utah works collaboratively with animal rescue groups, city shelters and passionate individuals all dedicated to the mission of making Utah a no-kill state. As part of this mission, Best Friends hosts adoption and fundraising events, runs the Best Friends Pet Adoption Center in Salt Lake City, operates two spay/neuter clinics and leads the No-Kill Utah (NKUT) initiative. Together, we will Save Them All.