Image
Two shy dogs, a Lab mix and cattle dog mix, support one another and balance each other perfectly.
By Christelle L. Del Prete

Ren, a three-year-old black Lab mix, and Cassie, a two-year-old cattle dog mix, are like yin and yang. It wasn't always this way. Both dogs had issues that made it hard for them to fit into society (human or canine). As a result, they'd both been treated like misfits. But here at Best Friends, their issues have actually brought them together. Kindred spirits, they have learned not only to lean on each other for support, but also to balance each other out and help each other open up to the world.

Dogs too afraid to fit in

Ren came to Best Friends from a shelter in Missouri, and Cassie from one in Washington. They both arrived very shy and fearful. Ren startles easily, and sometimes lacks confidence with other dogs. As a result, he was picked on frequently and rejected time and again by potential run mates. After being bullied so many times, Ren had almost given up on his own kind.

Cassie had the opposite problem. She got along just fine with other dogs; it was people who scared her. She had a great deal of trouble trusting them, even when they were trying hard to build a relationship with her. In fact, she was so afraid of strangers that when placed in a group run, she wouldn't let any of the caregivers come near her. The problem was so severe that it was difficult for her to live in Dogtown's general population. 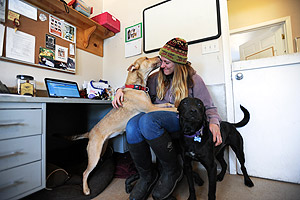 In cases like Cassie's, Best Friends caregivers and trainers will sometimes prescribe a stint in one of the Sanctuary offices. This provides really shy pets with much-needed exposure to people. They become used to the staff, and they learn how to deal with "scary" new visitors. So Cassie became a full-time resident of the Dogtown team leaders' office. Shortly thereafter, Ren joined her; and, though he may have been expecting yet another rejection from a canine counterpart, Cassie was more than happy to welcome him into "her" office.

The close contact with humans has helped both Ren and Cassie, and the two have become best friends and mentors to each other. Ren has helped Cassie learn to trust people more readily by being a positive role model when strangers come into the office. Instead of running away to hide in her crate, Cassie now cautiously goes up to sniff visitors.

Play and progress for Lab mix and cattle dog mix 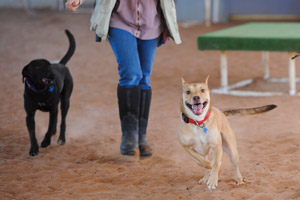 In turn, Cassie has helped Ren improve his dog skills. Right from the start, she was determined to get him to play with her. Not only has she succeeded, but she and Ren have also figured out how to balance their skills and even the playing field during their games of chase. Cassie can run like lightning; Ren is slower but much more agile in taking corners. So, they play the bob-and-weave game, with Ren dodging behind various objects in their play area to avoid being caught, and Cassie working on her agility skills as she navigates the turns.

The progress these dogs have made is truly amazing. Ren is now a happy, playful boy who can interact positively with almost any dog he meets. Cassie, though still cautious and better suited for an adult-only household, is much less wary of new people. It just goes to show what finding good friends, and the perfect yin-yang balance, can do.