Image
Zinc the cat is the perfect big brother and role model for homeless kittens, including special-needs youngsters. He helps socialize them.
By Christelle L. Del Prete

You could call Zinc the Pied Piper of kittens — or maybe just the nanny cat. Kittens seem to naturally gravitate toward the handsome cat, whose fur is the same shiny, silver-grey as the metal that shares his name.

With his Zen-like nature and the “old-soul” look in his green eyes, it’s not all that surprising that young kittens see him as a big brother figure and look to him for guidance. What is surprising is that Zinc, at nine months old, is barely an adult cat himself. He’s still a young boy with lots to learn about life. But teaching seems to be the main focus for this friendly, well-adjusted guy.

Zinc himself came to the Sanctuary as a young kitten, along with two of his siblings. While his siblings quickly found their forever homes, Zinc had some medical challenges that made it tougher for him to find a home. After his littermates were adopted, Zinc could have easily been the odd man out, since none of the other kittens in Cat World were the same age as him. 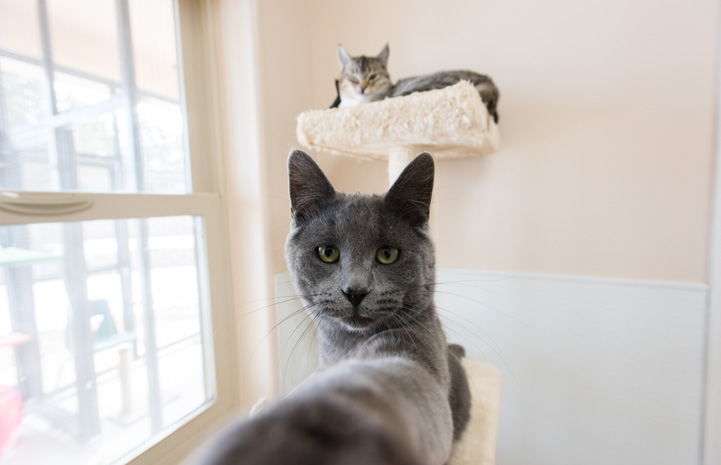 Zinc quickly set himself apart from the other kittens, but he had no intention of going it alone. Instead, he stepped up to lead the way. The first thing he did was to take a special needs kitten named Jordy under his wing. Jordy, who’d found himself homeless when he was only 15 days old, came to the Sanctuary alone to get extra help with his medical needs.

Because Jordy hadn’t spent enough time romping with his own siblings to learn how to play nicely with other cats, most other kittens found him a little too rambunctious for their taste. But even though Zinc is actually three months younger than Jordy, he helped to teach him that it’s possible to wrestle and play without getting too rough-and-tumble and scaring off his playmates.

Since Zinc had already perfected these important play skills and was always gentle with smaller kittens, he ended up in a room with six youngsters. A few of the kittens were from different litters, but they all had one thing in common. They’d spent the first few weeks and months of their lives with little to no human interaction, so they were all unsocialized.

Cat World caregivers work tirelessly to get kittens like these used to people. One of four kittens rescued from a national park was Thea, a fluffy little brown tabby who was especially fearful and wary of her caregivers. But big brother Zinc stepped in to help bridge the gap between them. 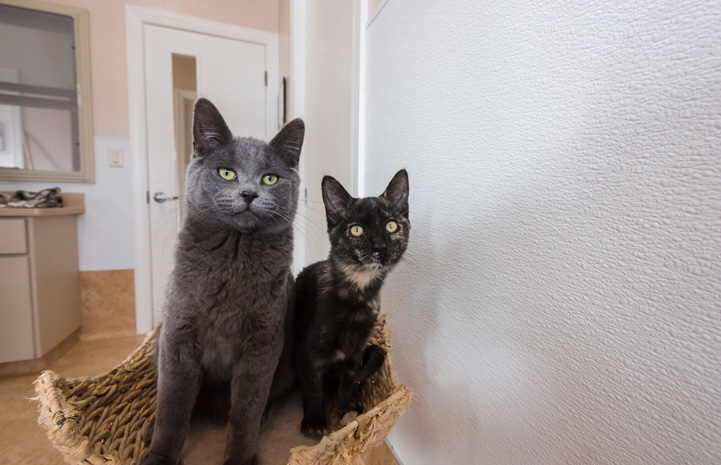 These days, Zinc is rarely ever alone. He’s usually hard at work showing his kitten friends the ropes. Sometimes that means modeling how to soak up pets and love from people, or how to climb a cat tree. At other times, it’s sharing quiet moments, such as when Zinc curls up in his bed with one or two kittens snuggled tightly up against his chest.

Whatever he happens to be doing at the moment, Zinc has become Cat World’s most perfect role model for young kittens. And, in that role, he’s truly in his element. 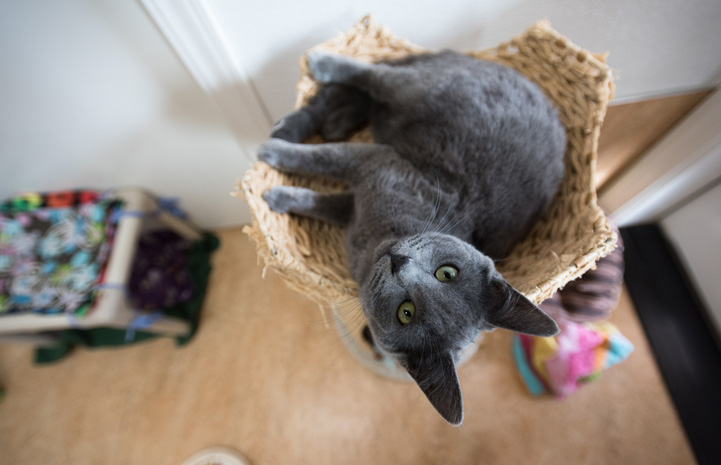 Help save more special cats like Zinc. Here’s how: