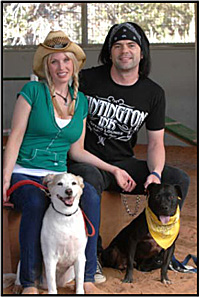 Nevada animal lovers have much to celebrate today as Gov. Brian Sandoval signed into law Assembly Bill 110, which prevents local governments from adopting or enforcing an ordinance or regulation that deems a dog dangerous or vicious based solely on the breed of the dog. The new law takes effect Oct. 1, 2013.

Richard Hunter, owner of Mel, one of the "Victory" dogs rescued and brought to Best Friends from Michael Vick's 2007 dog fighting bust, testified before the Nevada Senate to show support.

"Best Friends is proud that Nevada has taken steps to prevent breed discrimination," said Ledy VanKavage said, senior legislative attorney who helped draft the bill. "Every American who follows the right safety rules as a responsible dog owner should be allowed to own whatever breed of dog they choose."

"Assembly Bill 110 bans breed discriminatory laws from being enacted anywhere in Nevada," Assemblyman Ohrenschall said, "I'm confident that this law will benefit dogs, dog owners and animal lovers throughout our great state. It has always been bad public policy to enact ordinances that target a certain breed of dog without considering that individual dog's actions. I'm proud of sponsoring this legislation because it will help keep our innocent friends from being killed needlessly and senselessly. This bill will help strengthen the bond between humans and our beloved dogs."

Many states have passed laws that allow all dogs to be evaluated and treated as individuals and permit local jurisdictions the authority to hold irresponsible owners accountable when their poor decisions cause injuries to other dogs or people.

"Our fundamental goal is to achieve safe and humane communities. We want our communities to be protected against dangerous dogs - and we want abused dogs to be protected from irresponsible owners," VanKavage said. "Because everyone benefits from a safe society - both people and pets."

Studies done in countries with breed-discriminatory laws, such as the United Kingdom, Spain and Germany, found that these laws didn't reduce the number of dog bites or improve public safety. Based on these studies, and concerns about due process and property rights infringement, the American Bar Association, the National Animal Control Association, and the American Veterinary Medical Association don't support breed discrimination. They support laws that go after the real problem - the behavior of the individual dog and the behavior of the reckless owner.

Best Friends Animal Society has for many years encouraged state and municipal governments to adopt breed-neutral, dangerous dog/reckless owner laws that focus on the key causes of dog aggression - owners' failure to spay or neuter, train and socialize dogs regardless of breed, or because they abuse/neglect dogs or force them to live on chains.

Best Friends Animal Society® is a national animal welfare organization building no-kill programs and partnerships that will bring about a day when there are No More Homeless Pets®. The society's leading initiatives in animal care and community programs are coordinated from its Kanab, Utah headquarters, the country's largest no-kill sanctuary. This work is made possible by the personal and financial support of a grassroots network of supporters and community partners across the nation.