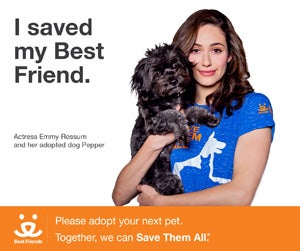 LOS ANGELES -  Known for being one of the most diversely talented young entertainers in the country, Emmy Rossum is adding her star power to national Best Friends Animal Society's drive to end the killing of dogs and cats in our nation's shelters.

Rossum has been captivating audiences with her extraordinary talents for more than a decade. Her acting performance in Songcatcher earned her an Independent Spirit Award nomination in the category of "Best Debut Performance." Four years later in 2004, her starring performance as "Christine" in The Phantom of the Opera earned her a Golden Globe Award nomination, as well as the National Board of Review's "Best Female Breakthrough Performance" Award and the Broadcast Film Critics Association's "Best Young Actress" Award in 2005. She currently stars in Showtime's dark comedy series, "Shameless."

Rossum said when people adopt pets they set in motion a chain of events that saves many lives.

"The wonderful thing about adopting from a shelter or rescue organization is that you save two lives, the life of the dog or cat you adopt and then another who takes the open spot at the shelter," Rossum says. "Then when that dog or cat gets adopted there is another open spot, and so on.  There are so many amazing dogs and cats of all ages, sizes, temperaments and breeds looking for homes and when you make that connection with the right one, your life is changed for the better. I encourage everyone to find their new best friend at their local animal shelter and together we will save them all."

Best Friends Animal Society is the only national animal welfare organization dedicated exclusively to ending the killing of dogs and cats in America's shelters. A leader in the no-kill movement, Best Friends runs the nation's largest no-kill sanctuary for companion animals, as well as lifesaving programs in partnership with rescue groups and shelters across the country. Since its founding in 1984, Best Friends has helped reduce the number of animals killed in American shelters from 17 million per year to about 4 million. By continuing to build effective initiatives that reduce the number of animals entering shelters and increase the number who find homes, Best Friends and its nationwide network of members and partners are working to Save Them All®.