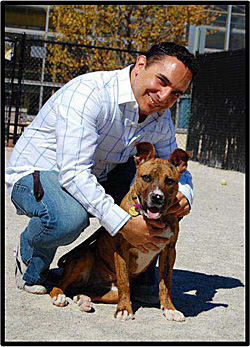 Peralta, who will assume his new position Dec. 10, brings years of animal welfare experience to the position, including three years with the PSPCA, six months of which were spent as interim executive director. He also spent a number of years with the Nevada Humane Society in Reno, Nev. and the Humane Society of the Pikes Peak Region in Colorado Springs.

In addition to working with the coalition he will manage the Best Friends Animal Society Adoption and Spay-Neuter Center in Mission Hills, Calif.

"We are delighted that Marc has joined us to lead the NKLA organization to eliminate pet homelessness in Los Angeles," said Paul Altherr, chief programs officer for Utahbased Best Friends Animal Society. "Mark clearly has the competencies for this role, and what is especially important is his commitment to the no-kill philosophy."

NKLA, launched in early 2012, is a coalition of more than 50 Los Angeles area animal welfare groups banding together to bring Los Angeles to a point where no more animals are killed in its municipal shelters. And in 10 months, there has been a reduction in LA shelter killing by 3,000 animals over the same period in 2011. Best Friends Animal Society, by authorization from the Los Angeles City Council, operates an adoption and spay-neuter center out of a Los Angeles municipal shelter in Mission Hills.

"When I got into animal welfare, it was because I wanted to help animals who every day were dying in our shelters," Peralta said. "I wanted to be a part of solving the problem, and as I've gone along in my career, that's been the focus.

"Anyone in animal welfare agrees that we want to get to a point in time where no animal needs to die anywhere. Los Angeles is a community that loves animals and, though we still have some work to do, the city is committed to no-kill and I'm excited to be a part of this cause. It's the perfect job for me."

Peralta spent a considerable amount of time in San Diego growing up, so he is no stranger to southern California. He said that moving to a national organization like Best Friends has always been on his career radar.

"Best Friends is a well-known national organization with a very clear mission that I'm passionate about," he added. "Living and working in a great community like Los Angeles, one that also has a national presence, has always been one of my goals. When I discovered the no-kill movement-that was it for me."

For more information or for an interview with Marc Peralta, see the media contact above.

Best Friends Animal Society®, named Animal Welfare Non-Profit National Brand of the Year based on the 2012 Harris Poll EquiTrend® study, is a national animal welfare organization building no-kill programs and partnerships that will bring about a day when there are No More HomelessPets®. The society's leading initiatives in animal care and community programs are coordinated from its Kanab, Utah headquarters, the country's largest no-kill sanctuary. This work is made possible by the personal and financial support of a grassroots network of supporters and community partners across the nation.