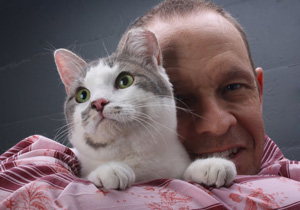 "Peter is one of the most informed individuals on the topic of community cats and the science and policies surrounding community cat issues," said Holly Sizemore, director of national programs for Best Friends Animal Society. "He's a natural fit for us and our work in helping us shape community cat policies and manage successful cat programs nationwide. We are thrilled to welcome Peter to the team."

Wolf is the founder of Vox Felina, a blog featuring in-depth analysis of issues related to free-roaming cats, and trap/neuter/return (TNR*). In just three years, the site has attracted a devoted audience of feral cat advocates and become an invaluable resource for journalists, including writers and reporters from national publications. Wolf also contributes to the Petfinder.com blog.

Additionally, Wolf is a well-known presenter and speaker on cat issues at national conferences and is a member of the board of directors of FixNation, one of the country's most highly regarded TNR/low-cost spay/neuter clinics.

"Ultimately, my decision to join Best Friends can be explained with a single word - impact," said Wolf. "Vox Felina gave me a voice for speaking out on behalf of community cats, but with my new role at Best Friends, it's like I've just been handed a megaphone."

The holder of a bachelor's degree in mechanical engineering and master's degree in industrial design, Wolf's professional/industry experience is in the areas of acquisition, analysis and synthesis of quantitative and qualitative data. Most recently, Peter served as a lecturer in The Design School at Arizona State University, where he taught courses in product design, visual communication design, design thinking, and qualitative research methods.

A resident of Phoenix, Ariz., Wolf has seven cats of his own, fosters three others and also cares for two small colonies of community cats.

* Trap/neuter/return - or TNR is the proven and humane method for reducing the numbers of community cats. It involves trapping, neutering, vaccinating and releasing community cats back to their colonies. Sterile cats can't reproduce and, over time, TNR reduces the number of free roaming cats in the target colony. TNR programs are quickly growing across the country as local governments and community groups adopt the policy based upon its success.

Best Friends Animal Society is a national animal welfare organization building no-kill programs and partnerships that will bring about a day when there are No More HomelessPets®. The society's leading initiatives in animal care and community programs are coordinated from its Kanab, Utah headquarters, the country's largest no-kill sanctuary. This work is made possible by the personal and financial support of a grassroots network of supporters and community partners across the nation.