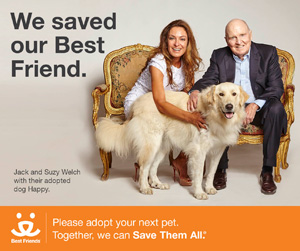 NEW YORK CITY - During Jack Welch's stellar 21-year tenure as CEO of General Electric, he gained a reputation as a leader who transformed the business landscape with his straight talk and fast action.

Retirement has done little to mellow Jack, and he's now putting his passion into several causes, including one that has recently captured his heart: the plight of America's shelter pets.

And no one is more surprised than Jack himself.

"I was bitten by a dog growing up and was scared of them my entire life," Jack recalls. "But finally, after 15 years of Suzy pleading for a dog, I relented. It took me about two days to realize what I'd been missing. She's changed my life."

Jack and his wife Suzy, the noted business journalist and longtime animal rights advocate, adopted Happy, a Great Pyrenees mix, after she was pulled from a shelter where her time was running out. In fact, she had just eight hours left! "Once you know the joy a shelter dog can bring to a family, and a family can bring to a shelter dog, you know you have to help," Suzy Welch says. "Nine thousand dogs and cats die every day in America's shelters."

"That number is staggering," adds Jack. "By sharing the message, we want to help bring it down to zero."

To that end, Jack and Suzy are lending their faces to Best Friends Animal Society's national efforts to change the future for America's homeless pets. They are participating in Best Friends' photo campaign, posed with Happy, in support of the Save Them All call to action. Best Friends, the only national animal welfare organization dedicated exclusively to ending the killing of dogs and cats in America's shelters, has brought increased awareness to how people can get involved in the solution by adopting, and spaying/neutering their pets, donating, volunteering and sharing this message with their friends.

Best Friends Animal Society is the only national animal welfare organization dedicated exclusively to ending the killing of dogs and cats in America's shelters. A leader in the no-kill movement, Best Friends runs the nation's largest no-kill sanctuary for companion animals, adoption centers and spay and neuter facilities in Los Angeles and Salt Lake City as well as lifesaving programs in partnership with more than 1,300 rescue groups and shelters across the country. Since its founding in 1984, Best Friends has helped reduce the number of animals killed in American shelters from 17 million per year to an estimated 4 million. By continuing to build effective initiatives that reduce the number of animals entering shelters and increase the number who find homes, Best Friends and its nationwide network of members and partners are working to Save Them All®.