Reflecting on the race of my life

Usually Facebook memories that pop up evoke a fond memory of a beloved pet, a great vacay or some such life event. But the memories that popped up unbidden over the past few days were a different story altogether and put me into reflection on a series of events that I wish had never happened. It did happen, though, and it happens all too often to many other women.

So, I share this as a reminder to myself of one of the biggest challenges I have faced and hopefully as encouragement to others who may be in the middle of the fight of their life with cancer. I don't think it's ironic that this happened in October, Breast Cancer Awareness Month.

It feels like 100 lifetimes ago since I was first diagnosed with advanced stage cancer. Powerful and painful memories have been popping up all weekend, and quite frankly, they’ve taken me back to a place I never want to be again. Sometimes you have to visit those places anyway to realize just how much fire you’ve had to walk through to get to the place you are today. Despite the trauma of that harrowing period of my life, I decided it’s a story worth reflection, worth sharing and worth celebrating. 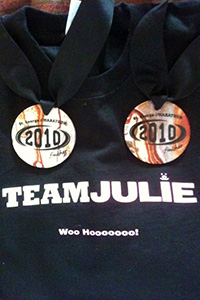 Ten years ago, I was in the race of my life. I’d spent the last 10 months, beginning in early January 2010, notching up five surgeries and a battery of chemotherapy followed by daily radiation. I was determined to continue my love of running marathons, while at the same time going through chemotherapy and radiation treatment. For me, the marathon race was a poignant and symbolic expression of my life’s race. The Friday morning before Saturday’s St. George Marathon, I was at UCLA lying on my back getting my 34th of 39 rounds of radiation. All I could think about was the six-hour drive ahead of me across the Mojave Desert to Utah for the 4:00 a.m. start time and the 26.2-mile race that lay ahead — all with the hope that the deep, raw wound from the radiation would hold up during the run.

The run was an analogy of my life. It was full of highs and lows, joy and pain, blood and tears, of wanting to quit, wanting to check out, wanting to find excuses in case I didn’t finish, wanting to blame something or someone for my current circumstances, wanting to take the easy road. The pain from my radiation wound and my surgeries was indescribable, like having a cantaloupe-sized blister and at times nearly sending me into delirium.

There were hundreds of times I was ready to quit and hop on the ambulance they provide for runners who break down, but this had become more than just a marathon for me. This was about the human spirit, about walking to the edge and looking in. This was about testing my limits of grit, determination, courage and focus. This was about staring down the pain and humiliation of cancer and snatching back what was always mine. I finished the slowest but most powerful race of my life that day.

Sunday afternoon, I drove back across the Mojave Desert for Monday’s radiation, round 35.

I will be forever grateful to those who were there for me most during this time.