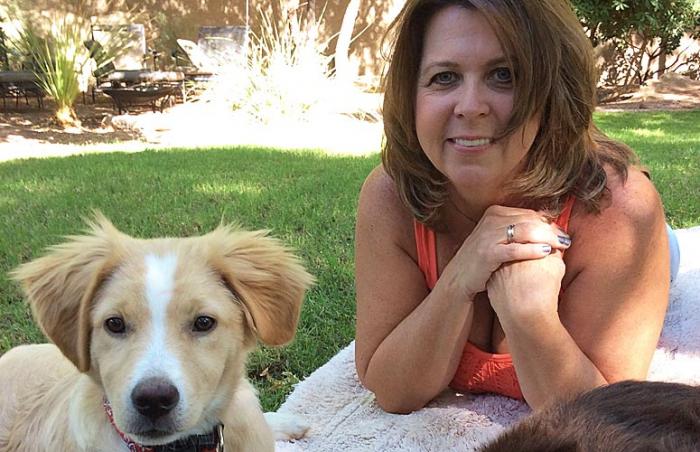 Abandoned puppy finds love and trust at the Sanctuary Out in the desert, not far from the Sanctuary, a little puppy was found all alone and terrified. Good Samaritans stepped in and brought him to safety. But the puppy, dubbed Pauly, was so terrified that he hid under the seat of his rescuers’ car and refused to come out. Pauly was about eight weeks old on the day of his rescue, and it could have been his first contact with humans.

Because he was so unsocialized and fearful, Pauly came to the Sanctuary. He was set up in a comfortable room in puppy admissions, but because he was used to living outside, he immediately started searching for a way to escape. Dogtown caregivers couldn't get near him. He crouched in the corner, as far away from them as he could get, and even growled a little. The poor puppy was terrified of his new surroundings.

But caregiver Analia Matias, Dogtown’s “puppy mom,” says it doesn’t take very long for unsocialized pups to realize that people are good and to start coming around. “He was so hungry,” Analia says, “so I sat with him and gave him food with a spoon.” She also took him into the kitchen to hang out with her every day during lunch. Little by little, the young puppy began falling into a routine and learning to trust his caregivers.

Because it was important for Pauly to extend his budding trust beyond his primary caregivers, Betty Grieb, a local volunteer, spent lots of time with him. She sat in his room and read to him, allowing him to become comfortable and to approach her in his own time.

Learn how to socialize a dog

When Pauly got curious enough, Betty started walking her fingers on the floor, enticing him to play. He couldn’t resist coming over to investigate, and soon he was letting Betty pet him gently. “He is quite smart,” she says, “and he learned fast that no one was going to hurt him. It just took a little bit of time and … what a difference!”

Like Betty, Matt Fisher, who is doing a four-month internship at Dogtown, also spent lots of time playing with the puppy and helping him get used to being handled. Pauly discovered that he liked to jump across Matt’s legs when the intern was sitting on the floor, and he didn’t object when Matt would sometimes scoop him up in midair. “He was shy in the beginning,” Matt says, “but in a week he changed from fearful, growly dog to one who wanted to explore.”

Within a week’s time, Pauly shed the last of his fear and began to play with toys, probably for the first time in his short life. In less than a month, he started looking forward to meeting new people. He also began doing basic training, including hand targeting, in which someone holds his or her hand out, and Pauly sniffs it for a treat. “He grew in so many ways,” Matt says proudly. 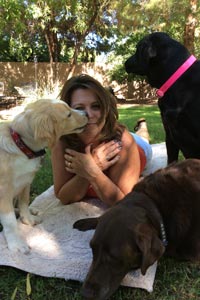 Pup adopted into a forever home

It’s no wonder then that Pauly found his forever home so quickly. Lucy Carlson wasn’t looking to adopt a puppy, but when she saw a picture of Pauly on Facebook, she fell in love. Now, Pauly’s got a new name, Muggz, and a whole new life. He has become Lucy’s shadow. “He follows me everywhere,” she says. “He is doing great. He absolutely loves people, and is as friendly and well behaved as he can be when people come over.”

In fact, Muggz bears little resemblance to the scared, abandoned pup who first came to the Sanctuary. A little time and a lot of love have turned him into the happy, confident and loving dog he is today.