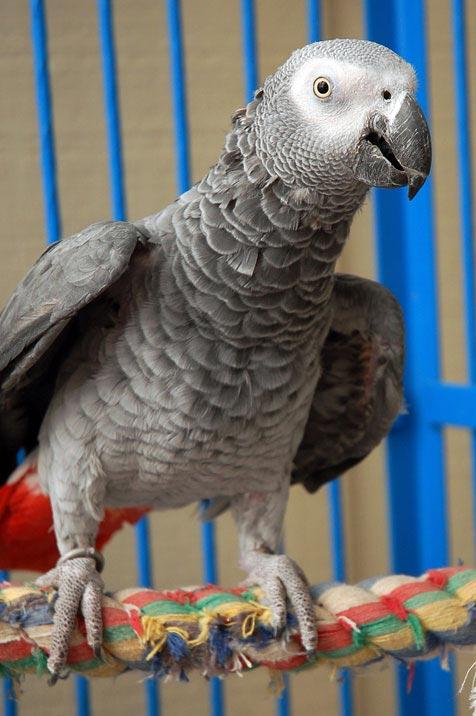 Parrots aren’t for everyone. They’re complex animals who require a great deal of time, effort, and patience from the people whose lives they share. Consider also that parrots, especially the big ones, live a very long time. In fact, many parrots outlive their humans. So what does all that add up to? Plenty of parrots losing their homes. But they’re still being bred in captivity.

Best Friends was recently asked to help out a group of five breeding African greys who were sent to a pet store after the breeder became too ill to care for them. Three of these birds were wild-caught and want nothing to do with people. The other two were hand-raised but don’t have much use for people either, except maybe to deliver a nip here and there! Breeding birds displaced like this often end up back in other breeding programs since they weren’t raised to be friendly.

There wasn’t much room at the sanctuary for wild parrots. But Feathered Friends, the bird area at Best Friends, didn’t want to see them breed again, so the caregivers started making phone calls. The networking paid off! The three wild-caught birds (one of whom had lost her mate) will be going to the Oasis, an avian sanctuary located in sunny southern Arizona. At the Oasis, they’ll live out their days in a large flight aviary with other greys, but not as breeders.

Hand-raised birds coming to the Sanctuary

The two hand-raised greys will stay at Best Friends. One of them has wing damage and would not be able to fly or live in the large flight aviary. Besides, since they were hand-raised, with socializing and a lot of patience, these two could come around as companion birds. The bottom line, though, is that five birds have now been pulled from the breeding pool. And that’s something to celebrate.

Find out what to consider before adopting a parrot