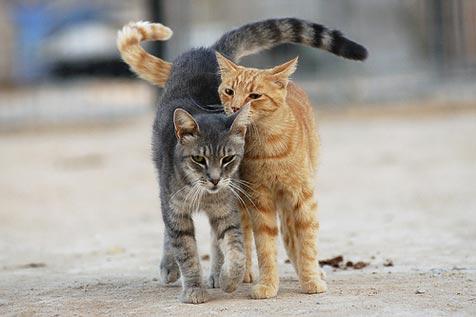 Jerry and Linda Bell lived just two miles away from the FLOCK property in Pahrump, Nevada, site of a cat rescue operation turned hoarding situation, but they didn’t even know it existed until they saw a story about the rescue on the evening news.

"There’s no reason to be on that street," Jerry says. "The property had a solid fence around it and no one driving by would have any idea."

Learn about animal hoarding and its causes

Volunteering to help the Pahrump cats

Jerry and Linda headed over to the rescue site the next morning. "We looked around and were completely overwhelmed by the magnitude of the situation," Jerry says. "How could anyone get a handle on this?"

They asked Patti Lindh, who was coordinating volunteers, how they could help. She handed them some rakes, pails and large trash bags so they could help clean the yard, which at that time was one big toxic litter box. After that, Jerry and Linda came out to the rescue site almost every day, pitching in wherever needed. Jerry would often make two trips a day to Las Vegas to take cats to veterinary appointments. Linda brought home-cooked meals for the rescue crew. They ended up adopting four of the Pahrump cats.

People from all over the country come together to assist

Jerry and Linda are just two of more than 500 volunteers from 27 states and two Canadian provinces who came out to help at the rescue site between July 2007 and January 2008. Some canceled summer vacations and drove thousands of miles to scrub out cat boxes in 115-degree heat, all for the love of cats.

Another 100 volunteers helped out at adoption events, held at casinos in Pahrump and Las Vegas that kindly offered space. There are the local veterinarians who offered their services, and the people who dropped by the site every day with loads of cat litter, cat food and other supplies. Best Friends volunteers, members and others also opened their wallets. The overall cost of the Great Kitty Rescue as of April was between $500,000 and $600,000, and donations, both cash and in-kind, stood at $338,000.

Everyone who helped in this rescue should know that every time they read a story or see a photo of a Pahrump cat doing well today, they played a big part in it.

It was the evening of September 17 and Juliette Watt, Best Friends’ resident pilot, eased the single-engine, four-seater Mooney Encore down on the runway of an airport just outside of Austin, Texas. She and Elissa Jones, manager of Best Friends’ Guardian Angel program, were carrying some precious cargo – eight feline-leukemia-positive cats, including Cover Girl.

Sheila Smith, who runs a rescue called Shadow Cats, was there to greet them. They began unloading the cat carriers and putting them in Smith’s SUV. Sheila looked into the carrier that held Cover Girl. "I just looked at her and said, ‘There’s my baby,’" Sheila says.

Shadow Cats is part of Sheila’s home, which she shares with her husband, Roy, a veterinarian with his own practice, and usually between 50 and 75 cats. It’s an amazing place, with beautiful, spacious living areas for the cats, including enclosed outdoor areas.

For all the poorly-run FLOCKs in the world, there are thousands of people out there like Sheila who start wonderful rescue organizations. They have adequate space for the animals and enough volunteers to help care for them. And they have open-door policies, which Sheila says all organizations should have "because it keeps you honest."

"When there is secrecy, they set themselves up for getting in over their heads," Sheila says.

Sheila would later take in nine more Pahrump cats. "We need more Sheilas in the world to make it a better place for all of us," Juliette says.

The rescue site officially closed down in early February and the remaining cats came back to Best Friends. Shelley Thayer says one of the last things she saw was a Nye County animal control officer putting chains and a padlock on the FLOCK property. That felt good.

Many of the cats have since found forever homes or have been placed with other rescue organizations. Others still reside at Best Friends, where Sherry Woodard and other staff and volunteers continue to work with them in the hope that they, too, will one day find forever homes. The rescue continues.

The executive board of FLOCK is now facing 17 Nye County charges relating to animal neglect and one charge of further engaging in acts of animal cruelty. It is considered to be one of the largest cases of institutional hoarding in U.S. history. Best Friends attorney Russ Mead worked closely with Nye County officials to prepare the case against FLOCK.

"As far as we have been able to determine, this is one of the few, if not the only time an organization has been charged with animal cruelty," Russ said after the charges were filed in June. "One of the lessons from this animal hoarding case is that we all need to be vigilant about the animal welfare and animal rescue organizations we support. The horrible aspect of this crime is it was done systematically to such a large number of cats by people hiding under the umbrella of a nonprofit."

Former FLOCK president Sheri Allen, who was not charged in the FLOCK case, pleaded not guilty to 13 counts of animal cruelty and neglect charges in a separate hoarding situation involving more than 100 animals at her own home. (Those animals were also placed in the care of Best Friends.) She agreed to plead guilty to one misdemeanor charge related to animal cruelty and neglect in exchange for a suspended 30-day jail sentence and 40 hours of community service. Her home is also subject to random inspections by Nye County Animal Control.

Best Friends volunteers and staff recently gathered at Angels Rest, the pet cemetery at Best Friends, to pay tribute to the 80 Pahrump cats who crossed over the Rainbow Bridge. The moving memorial reunited many of those who had given so much of their time, and their hearts, to this rescue.

A recent visit to Rescue Village at Best Friends found Jinx, the former lunger, enjoying some petting from caregiver C.C. Gonzales. And Licorice, who’d once been so traumatized he couldn’t even be around other cats, was sleeping peacefully in a cozy bed surrounded by other snoozing felines.

Meanwhile, in Texas, it’s hard to believe Cover Girl is the same cat in that photo Troy Snow took at the beginning of the rescue. She tips the scales at a healthy 8 ½ pounds now, more than double what she weighed when Troy captured those first photos. She enjoys tossing her toy mice in the air and stretching out in the sun. She’s learned how to be a cat again.

"She has the time and the energy to think about something other than just surviving," Sheila says. "She’s never going to be a lap cat, but she’s become a cat who’s comfortable around people."

Never say never. One recent morning, Sheila woke up to find Cover Girl curled up on the end of her bed, off in dreamland. She swears she heard her snoring.