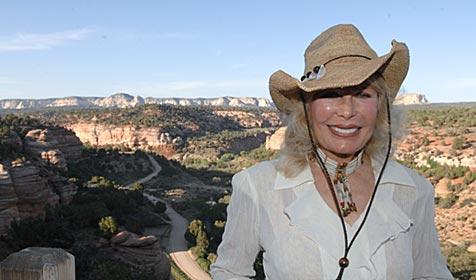 Actress Loretta Swit is most known for her incomparable role as Hot Lips on the epic-running TV series, M*A*S*H. But her glamour belies her passion: getting down and dirty for animal causes. From the seal hunts of Canada to the plight of companion animals in the Far East, there is practically no animal issue Swit is not educated about and using her talents to help bring about sustainable change to alleviate suffering.

Bridging the gap between art and animal welfare, Swit’s watercolors are a testament to the unique relationship between people and animals.

Observing Swit on a recent tour of the animal departments of Best Friends, one could feel the visceral reaction she had towards the animals in recovery at the sanctuary. She connects with her subjects on a very deep level and it translates to her artwork. So it is understandable that she would want proceeds from it to help make the world a better place for them.

"My art is for the humane community; it is only available through non-profit animal foundations," Swit related. She will not allow her work to be sold through commercial galleries for the profit of the already fortunate. It is getting the attention and funding for the animals that drives her!

The latest recipient of her generosity is Best Friends Animal Society, where an installation of her art is on display until July 11 at the Angel Village art space.

Cyrus Mejia, resident artist and curator, is thrilled to have Swit’s work on display. "I’m so excited about Loretta showing her work at Best Friends because she is an artist who not only talks the talk, but walks the walk. Her compassion for the animals shows up in all aspects of her life, and here at Best Friends we are honored that she has offered to show her work and have it benefit the sanctuary," says Mejia enthusiastically.

At the show’s opening, Swit was radiant and engaged breezily with the crowd. She was an entertaining guest speaker and led a lively Q&A as part of the event. She revealed to the enraptured guests that she’s been a vegan for years; and shared how she had gently convinced her housekeeper to think beyond why a fur pillow should not be considered fashionable! She asked the woman: where does that fur come from? And proceeded to fur-bearing animals associated with that industry, to man’s best friend.

Compassion and teaching without words

She is convincing precisely because she approaches the subject of animal welfare the way she does her life—with insight, understanding and warmth, not militant belligerence.

"Compassion teaches without saying a word and effects change," explained Swit. Just as in her acting, there is compassion in her art. "We must show compassion for each other and the animals; the more people you can educate, the more you can make a difference."

She then told a story that exemplified this credo. In Patagonia, there was a threat towards the penguins—they were in danger of being killed for their pelts. With Swit’s help, animal activists were able to turn that around and show how, using the penguins, ecotourism could be a lucrative endeavor; one that didn’t involve their slaughter.

"When I was a child one of my mother’s earliest memories of me was on one afternoon: I was in the stroller and I saw a dog. I just perked up and screamed, ‘doggie, doggie, doggie’" She has been screaming doggie, doggie, doggie, in one way or another ever since. Be it using her presence for an animal-related public service announcement or creating her art, the message is weaved into the medium. Her conviction comes through time and time again in everything that she does.

Her animal paintings and artistic style

Gazing at the piece titled "The Rookie" in the show, there is something so haunting and endearing about the work that you want to see more and know more about this dog and his situation. With eyes lowered, you can feel the weight of the world on his puppy shoulders. "The Rookie" is a portrait of a dog that will go into service if he can pass the muster. Swit has captured the essence of roly-poly puppyhood infused with the seriousness of the road that lies ahead.

The other end of the canine spectrum is a little Chihuahua named "Bossie Nova." Nova’s portrait has a quick witted immediacy that says, "I am Chi, come reckon with me!" Intense eyes and radar ears, it is the embodiment of the Chihuahua spirit, and anyone who has been lucky enough to share their lives with one—will know that glint of mischief! Swit’s ability to imbue the personality of her subject into the image is unforgettable.

One collector at the opening, Michelle Sullivan, said: "I’m so impressed with the paintings, the work is so unique. I’ve never seen art in this style before; her paintings reflect her heart and soul, and I just love it!"

Swit’s style doesn’t stop at the paintings. Are you looking for a little bling? Swit is also an amazing jewelry designer and some of her pieces are available at Angel Canyon Gifts, the gift shop at the Best Friends Welcome Center. Her jewelry designs have an edgy quality that evokes chainmail meets Robert Lee Morris, fitting in nicely with this year’s bold fashion statements. This is a statement that you can wear proudly—it not only benefits the wearer, but animals in need.

Come to Best Friends and get artsy for the animals with an original Loretta Swit painting or wearable objets d'art. Buy one for yourself and one for your favorite animal-loving friend. It’s the gift that keeps on giving, one life saved at a time!