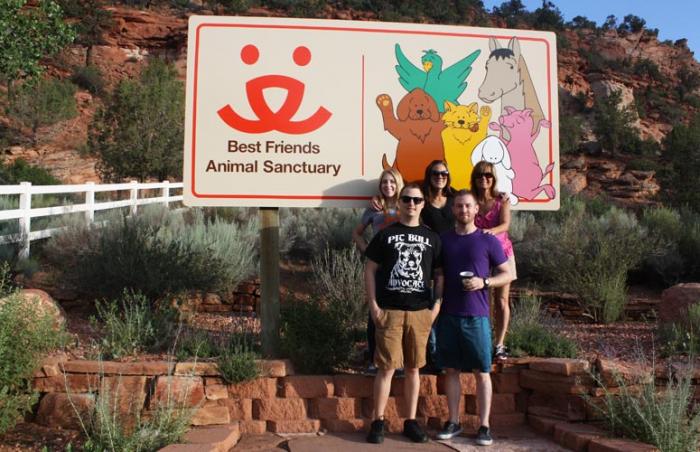 It must have been hard for Henry Ayer to hold in the surprise. He’d planned an elaborate, surprise 30th wedding anniversary trip with his wife Karen, and they were about to embark on the last leg of the journey. It began with a vacation to the tropical paradise of Bora-Bora, and when they returned, Henry told her the trip wasn’t over. There was another surprise in store. 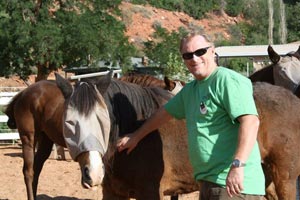 But Karen couldn’t understand why they were sitting in a rental car in Las Vegas. She was thrilled when their three children and niece showed up at the Vegas airport, but she hid her disappointment that the last big surprise appeared to be a town that wasn’t really her cup of tea.

“After being married to her for 30 years,” Henry says, “I knew full well Vegas wasn’t her thing.” He also knew that Karen was a big fan of Best Friends and had wanted to visit the Sanctuary for nearly 10 years. Now, she’d finally get her chance. He revealed the surprise by speaking the Sanctuary’s Kanab, Utah, address into the GPS in the rental car. Karen responded by immediately covering her face with her hands and crying tears of joy. “When I heard the address, I just lost it,” she says.

Caring for animals in need in Poquoson, Virginia

It was Karen’s dream destination. As animal lovers who walk the walk in their hometown of Poquoson, Virginia, the Ayerses embody Best Friends’ mission at home too.  Every morning before work, Henry feeds a colony of community (feral and stray) cats. About a year and a half ago, Karen, along with a few of her friends, co-founded a rescue organization to rescue and place abandoned, abused and neglected cats — the Poquoson Animal Welfare Sanctuary (PAWS).

Through PAWS, Karen and her friends have helped to introduce a new trap/neuter/return (TNR) program to the city. They also run a sanctuary in a large, donated house, which can accommodate up to 50 cats, has six small kitty cottages, and is located on three acres of fully enclosed land so that the cats can enjoy the outdoors. 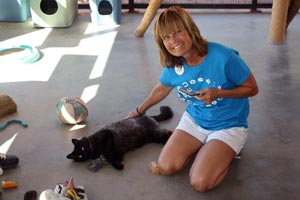 For the sake of the cats in her care, Karen wanted to gain useful knowledge during her visit to Best Friends. While volunteering in Cat World, she learned about best cleaning practices and how to utilize the best products to keep everything super clean at her own facility. And she loved the idea of taking cats for stroller rides and walks on a harness and leash (common activities in Cat World) and wants to put it into practice back home.

She picked up a lot of other useful tips too, such as using baby food to entice shy cats to come closer to people, and posting cats’ bios on a large board where visitors can see them. Best of all, however, Karen was inspired. “It’s nice to be somewhere where people all believe in what they do,” she says, adding that her rescue group is applying to become a Best Friends No More Homeless Pets Network partner.

“Everyone was really friendly, helpful, positive and appreciative,” says Henry, whose anniversary surprise was a rousing success. “It more than exceeded our expectations,” Karen says.

Visiting the Sanctuary was something she wanted to do for years, and now it is something she and her family will be talking about for many years to come.

Click here for more information about volunteering at the Sanctuary.