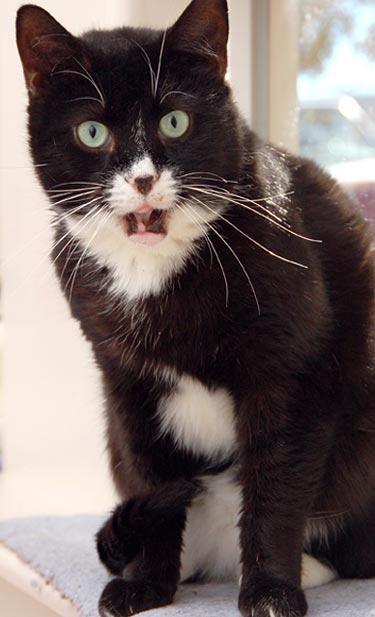 Joker was what we at Best Friends call a "rafter cat." Let's just say he was on the antisocial side of the spectrum. He didn’t want to be petted or meet anyone. He wanted to climb way up in the rafters of the cat buildings and slink around in his secret life of solitude. Nobody ever saw the fellow!

He came to Best Friends because he’d been part of a feral colony in New Jersey, where he had somehow hurt his lip. That’s why his mouth has a funny, drooping quality, like he’s always saying "Oh, my!" Folks who were taking care of the wild cats (or feral cats) in his area took him to the vet. After three surgeries, though, the vet’s diagnosis was that this cat would always have a funny lip. And if he went back on the streets, it would tear even further, which could be dangerous to his health.

So how do you bring a wild cat indoors when he’s got no other choice? Well, Best Friends provides spacious indoor and outdoor roaming space for cats who like to climb and be off on their own, without being petted. And fortunately, there was room! So Joker came to Best Friends’ Cat World, and then was basically never seen again. He took his meals when no one was looking, and spent all his days and nights by himself.

Then one day a cat named Peanut entered his life. Peanut is a house cat looking for a home, but he came to visit Joker’s wild cat room. And something happened to Joker when he watched Peanut getting petted and loved by all the caregivers. He must have decided, "That looks nice!" because the next thing anyone knew, he had cautiously, very cautiously, stepped down from the rafters. He ate his meal right in front of everyone for the first time. He pulled away at being touched, but the curiosity was now there. And soon, Joker was actually asking to be petted.

Today, Joker will even let strangers pet him. He shies away at the first touch; he’s still new at this. But if you’re patient and encouraging, he’ll eventually offer his fuzzy head for a rub. And that’s a big step! Pretty soon, he may even be looking for a home!