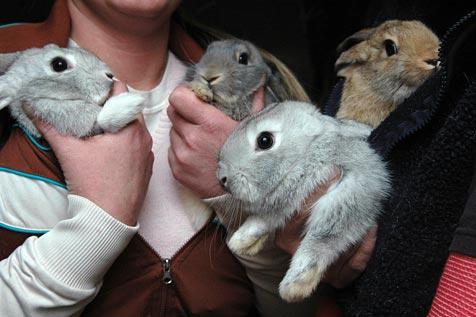 Baby bunnies saved after being abandoned on a golf course

The sea of rolling green at any respectable golf course must look like a virtual heaven-on-earth for rabbits. Maybe they enjoy the buffet bar growing as far as the eye can see, but it’s not a safe place for them. Not one bit. Predators, the elements, and the occasional three-wood tossed by an angry golfer all take their toll. Domestic rabbits need to live in a home environment, period. It’s a good thing there are folks who help.

Brandy Hill of Las Vegas, Nevada is part of an informal group of friends that call themselves Rabbit Rescue. Working with the Nevada SPCA, they are always on the lookout for domestic rabbits dumped at golf courses or city parks. Sad to say, that happens more often than you might think. At least this small group is making a difference. One local golf course, for example, used to be crawling with domestic rabbits. Now there is only one left. He’s a sneaky little guy, but they’re determined to grab him soon! All the rabbits are fixed, treated medically, and then placed in foster homes or rescues until adoption.

A year and a half ago, on that same golf course, there were four special baby bunnies who needed help. When Brandy first found them underneath a shed, they didn’t want anything to do with her. A little persistence paid off, though. Well, that and a handful of greens! Soon she trapped all four of the babies by hand and they were ready for a new life ahead. A life that, thank goodness, didn’t involve circling hawks or irate golfers.

The rescue group’s foster network at the time was nearly maxed and as it turns out, space had just become available at Best Friends. So the four bunnies came to live at the sanctuary. You might remember them, in fact. At the time there was a big naming contest with a whole bunch of suggestions sent in as ideas. The winning names were Bogie, Putter, Tiger, and Pebbles. Needless to say, these four were very popular from the beginning.

Time marched on and the rabbits settled into their new life at the sanctuary, but Brandy never forgot about them. Rabbits came and went through her rescue, yet these four stayed in her thoughts even though she had barely gotten to know them earlier. After a year and a half of daydreaming constantly about them, she finally wondered if maybe they were meant to live with her. As luck would have it, the friendly four were still available. Brandy decided to adopt.

After the eighteen-month absence, Brandy cried when she was reunited with her four castaways. She says they are all doing great in her home, and she’s thrilled to have them back in her life—this time for good. The four siblings are bonded closely, and Brandy is thrilled they will now always be together. You know, sometimes when things are meant to be, they just have a way of working out. Congrats!