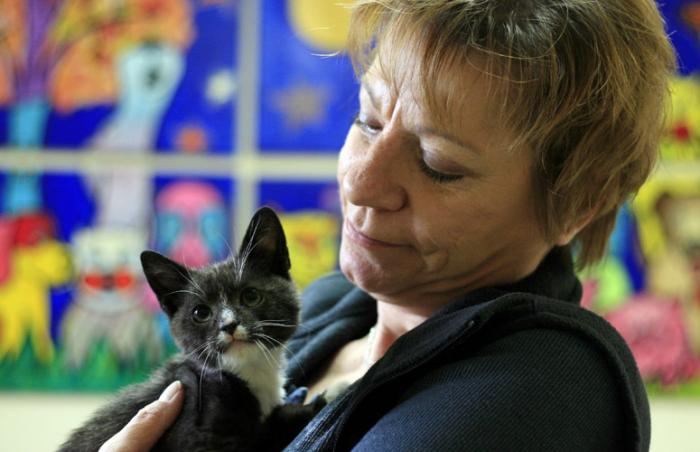 Having grown up with dogs and fish as a child in Germany, Barbara Bornemann hadn’t had cats as pets. But then her husband, Peter, introduced her to a love of felines – and now she can’t imagine her life without them.

However, it wasn’t until 2000, when she adopted a cat from a rescue group in Lafayette, Louisiana, that she first learned about the plight of homeless pets in America. In Germany, it’s illegal to kill shelter animals, so once educated she knew she had to help. 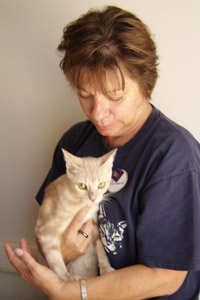 A dedicated volunteer, Barbara works at adoption events, helps with trap/neuter/return (TNR) for local community cats, and has fostered over 700 cats in the last 13 years. Additionally, she transports cats, personally delivering several lucky felines who have been accepted into Best Friends over the years.

Barbara and Peter first visited the Sanctuary following a convention in Las Vegas. So when her rescue group acquired some cats positive for feline leukemia (FeLV) and didn’t have the capability to care for them, she contacted Best Friends. Not only were the cats with FeLV accepted, but so were two cats with the feline immunodeficiency virus (FIV), making a total of four she brought that trip. And she keeps coming back.

“I had heard about Best Friends, but I couldn't imagine what it would mean to me later,” says Barbara. “I've visited regularly since 2006, and it's always like a homecoming. Driving into the canyon gives me an inner peace that I haven't experienced in many places.”

Just last year, she volunteered at the Sanctuary five times, for a week to 10 days each visit. Sometimes she brings cats who have been accepted. Over the years, she has transported a total of 21 cats, including the recently delivered Matt, who was found in a Louisiana swamp, and Lollie, who has FeLV. 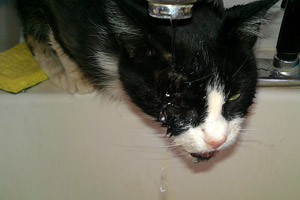 Barbara always volunteers at Cat World, but has a special connection with the FeLV cats, so regularly helps at Casa de Calmar, where the FeLV cats live. For years, she cleaned rooms and walked cats; however, a hip replacement last year now limits her activities.

She has developed quite a reputation for doing the dishes at Calmar. With so many cats, a lot of dishes get used, so there’s always plenty for her to do. But don’t think she’s unsupervised – Vlad the cat is on the job. “He always helps with the dishes,” laughs Barbara.

Well, the term “help” might be a stretch. Actually, it’s more like he takes the opportunity to drink water fresh out of the faucet as the dishes are washed. He doesn’t hold back. He sticks his head under the stream, completely soaking himself.

Animals like Vlad, the dedicated staff and volunteers, and even the serenity of Angel Canyon (where the Sanctuary is located) keep Barbara coming back. In fact, she visits so often, she and Peter recently purchased a townhome, and have plans to retire in the area.

She says, “It feels like coming home,” and in the not-so-distant future, it will be.