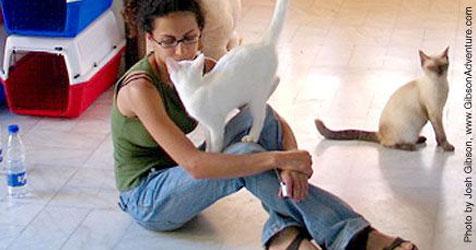 Best Friends helping Beirut for the Ethical Treatment of Animals

What a difference six months can make. And not.

Beirut for the Ethical Treatment of Animals cat shelter

Rapid Response Manager Rich Crook arrived last week at Beirut for the Ethical Treatment of Animals (BETA) to find some positive changes since his first visit last September. The cat shelter is coming along nicely, and the core group of people running BETA, the only animal welfare organization in Lebanon, has become more confident in their tasks and vision.

"I can tell these people are really committed," said Rich, who will be in Lebanon through early April. "I think their successes have proven to them they really are making a difference. But they still need help organizationally. And I plan on addressing that issue during the course of my stay."

A lot of things haven’t changed.

The shelter for dogs isn’t coming along as quickly as the cat shelter. Currently, there are 122 cats and 200 dogs living at BETA, around the same number of animals brought over from Lebanon to Best Friends six months ago.

BETA founder Joelle Kanaan said she knows there’s a long way to go for the group, but she’s pleased with the progress they’ve been able to make. The extra support on site, she thinks, will help the organization make greater strides quicker.

"Having Rich here gives us a great push and helps keep our hopes high. But there’s still a rough road ahead."

Spay and neuter for animals in Lebanon

Tangible progress will come in the form of performing spay/neuter operations on the BETA residents. Originally, Rich had planned for 150 operations, but he has since learned that nearly all the BETA animals are intact. His new goal is to simply do as many as possible.

That might not be as daunting as it sounds. Rich will be working in tandem with Ben van Hoogen, a rapid response manager from Amsterdam as well as two vets and two vet techs from Worldwide Veterinary Services. Ben is the founder of AniMedics, a professional animal ambulance service out of Holland. He has been in contact with Joelle and members of BETA for several months and had planned several visits to help out, but all fell through for one reason or another.

"This should work out pretty well," Rich said. "I’ve been doing all the paper work necessary for the procedures so we can get right down to business when they get here. We’ll have two spay/neuter mobile units to work with. I’m hoping this means we’ll be able to accomplish greater numbers of procedures in a shorter period of time."

Joelle said they can’t start soon enough. She and other BETA members have reached out to vets in the community to perform spay/neuter procedures with little success.

"The current political situation in the country has made it even more difficult on us to fund-raise for projects like these for the animals," Joelle said. "And all the vets we deal with are not as flexible as they were before with payments; most of them want money up front to operate on or treat the animals. This is a big problem for us."

The help coming from Best Friends and the team from Amsterdam will save BETA $14,000.

"I don’t know what we’d do without these guys," Joelle said. We are so grateful for their help."