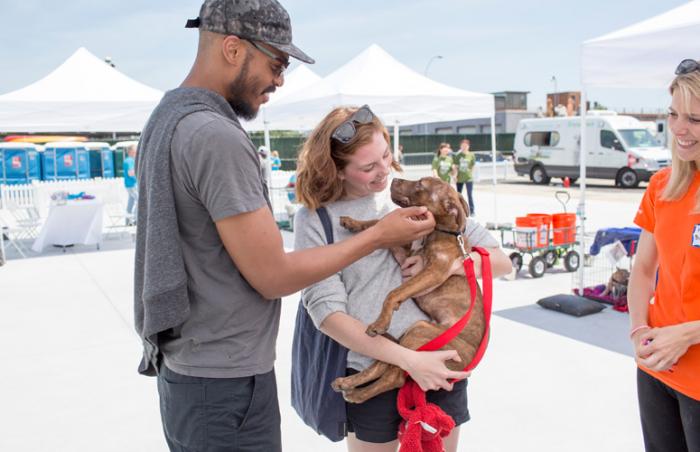 As you know, Best Friends Animal Society is working to Save Them All, all across the country. Every day, more than 9,000 dogs and cats are killed in shelters nationwide, simply for not having safe places to call home. That’s not acceptable. And we’re working with you to change it.

Now, we are excited to announce the opening of a brand new adoption facility in New York City.

New York is important, not only because of its population density, but because it’s a trend-setting city. There are already more than 200 communities around the country that have adopted no-kill, but when the big guns like New York and Los Angeles become no-kill for pets, the rest of the nation will follow. That’s why we’re in Los Angeles. And that’s why we’ve been working in New York for the past six years, holding Strut Your Mutt events that have raised nearly $800,000 for New York shelters and rescue groups, hosting large-scale pet super adoptions to help thousands of animals find homes, and running a foster program to help pets in New York shelters.

Now, a new physical facility will help support the tremendous work that rescue groups, shelters and other animal welfare organizations have been doing there. It will offer a home-between-homes and a terrific adoption outlet for New York animals in shelters.

Dog and cat adoption facility to be located in SoHo

Best Friends’ new adoption facility will officially open in 2016 in an exciting SoHo location, in the heart of Manhattan. What better place to be seen if you’re a homeless pet! We hope this welcoming and friendly venue will quickly become the trendiest go-to spot for anyone seeking a dog or cat. That it will be more appealing than any pet store, and make adoption far preferable to purchasing a pet. And we hope it will be of tremendous service to New York City shelters seeking loving homes for dogs and cats in their care.

We are delighted to share this news. No-kill nationwide is within our reach. And this is another huge step in that direction.

We’ll share more details as the grand opening draws nearer. Thank you for making it all possible. Together, we can Save Them All.

Help us with this exciting expansion by giving to help more animals.