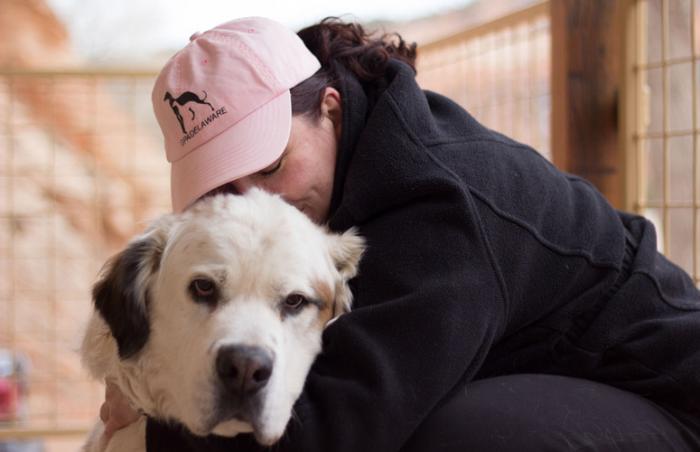 "DogTown," the National Geographic television program filmed at Best Friends, featured some of Best Friends Animal Sanctuary's dogs with medical and behavioral challenges, as well as the staff who helped them. And though it's been off the air for a couple years, it's still making a difference in lives today.

The show was Vicki Dixon and her son's first exposure to Best Friends. She would record each episode so they could watch them together. Over the years, she dreamed of one day visiting the Sanctuary in person. 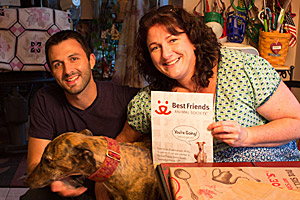 Around five years ago, Vicki took the next step on her journey as an animal lover. She attended a Greyhound Pets of America-Delaware meet-and-greet event.

"I did not choose him. He chose me," says Vicki in regard to Lucky, her first adopted greyhound. Since then, she adopted two more and started volunteering for the organization. She fosters, gives out information at events, and fundraises.

Not surprisingly, Vicki's animal-friendly ways continue to influence her son, James. He also volunteers for the group with his mom and maintains their Facebook page.

Since "DogTown" aired, Vicki had hoped to one day get the chance to visit Best Friends. James recently made that dream come true when he arranged a trip for both of them to the Sanctuary to celebrate his mom's birthday. Turns out, they weren't the only ones to benefit from their adventure. 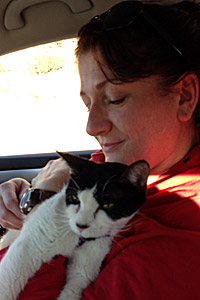 They signed up to volunteer, and five days before they were scheduled to leave, they were contacted by Best Friends, asking if they would be willing to transport two cats from a New Jersey rescue to the Sanctuary.

"We were already thrilled to be going on this trip, but this extra element (allowed us to) give back and help out," says James. "We immediately agreed to do it." Only one cat could make the trip, so Mia became their traveling companion, and the trio was Kanab, Utah, bound.

As self-professed "dog people" who never had cats, they were a little nervous - particularly when they were told Mia sometimes displays a little attitude.

However their worries were needless. "I really liked her spirit. She was playful, energetic and once she realized she could trust us, she really opened up and relaxed," recalls Vicki.

In fact, when they unzipped the carrier to allow her to pop her head out during the drive, she charmed her way entirely out, explored the car and fell asleep on Vicki's chest. So even before arriving at Best Friends, Mia became a feline ambassador, even leaving them both a parting gift - a generous covering of fur.

After years of waiting, Vicki's wish came true. She finally got the opportunity to visit Dogtown, the dog area at Best Friends that was featured in the "DogTown" television show. 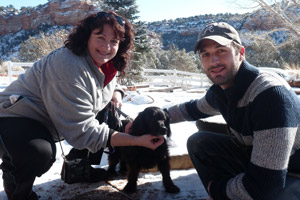 James and his mom's favorite part was volunteering at the Clubhouse, one of the buildings in Dogtown. They loved interacting with the dogs all day and spending evenings discussing the dogs they'd met. They even brought a little of Best Friends back with them each night, enjoying sleepovers with Google and Gizmo.

So was it everything they had hoped it would be?

"I felt that it was the most rewarding and best vacation I've ever taken," says Vicki. "It was just more than I ever imagined."

James agrees, saying, "I was so overwhelmed with all the goodness that came out of volunteering at the Sanctuary, interacting with the animals and even the people. It felt so good. It's almost like a little piece of heaven."