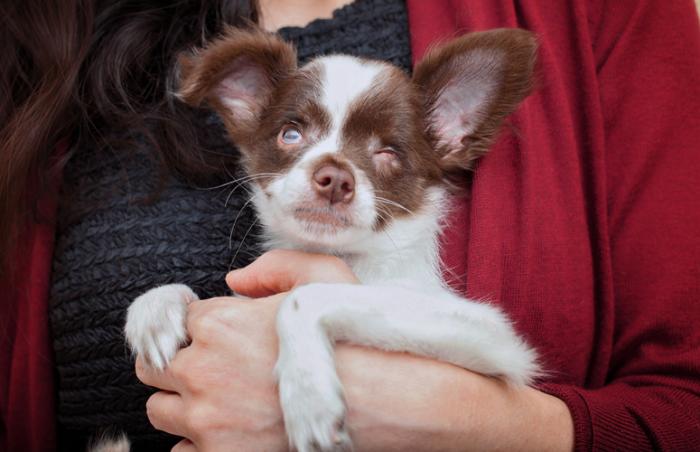 The tiny brown and white puppy’s life could have ended just a few weeks after he was born. He should have had two bright eyes with which to take in the new and exciting world around him. But, instead, he was born without a left eye, and with a right eye that was malformed.. However, he had a 100-percent share of natural puppy cuteness, with his soft, wiggly body and oversized velvet brown ears.

Blind puppy out of danger and into Best Friends 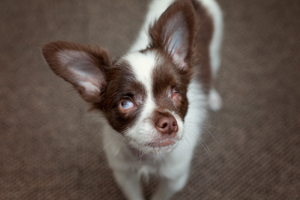 If the little pup had been born into a different situation, his family might have loved him the way he was and kept him. But instead, he was surrendered to a shelter in Los Angeles — weighing just two pounds, blind, and at just eight weeks old, especially susceptible to disease.

Los Angeles Animal Services (LAAS) caregivers, who wanted to get the puppy to safety as quickly as possible, asked staff at the Best Friends Pet Adoption and Spay/Neuter Center for help. All pets at the Los Angeles–based center are pulled from the six LAAS shelters, as part of Best Friends’ goal to make Los Angeles a no-kill city by 2017. Soon after he landed at the shelter, the puppy was on his way to Best Friends and the next phase of his life — waiting for a home and a family that wanted to raise and love a little blind puppy.

It sometimes takes a bit longer to find homes for pets with special needs. Other times, the perfect family finds them right away. That’s what happened when twin sisters, both of them ophthalmologists (that’s right — eye doctors), met the tiny pup. Alice and Julia Song were immediately drawn to him, because through their work they have a special understanding of blindness.

“We care for patients with eye problems every day, even those who are blind from advanced glaucoma, those who have had an eye removed for cancer or pain, or those who were born blind,” says Alice. They also have a soft spot for little dogs in need, and in the past have adopted from and regularly donated supplies to their local shelter. It didn’t take long for the sisters to decide that this little dog would be going home with them that day.

They named him Pappy (because he looks like he could be part papillon, with his big silky ears) and immediately went to work making him comfortable in their home, which meant introducing him to their two other dogs, Kaya and Mojo. They took to the new family member, while Pappy was thrilled by his new friends. Julia says: “He loves them. They lick each other constantly and play with each other.” 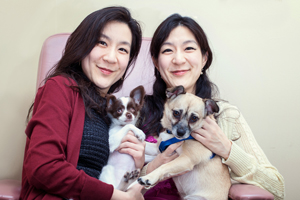 Puppy is lucky in love

Pappy is learning to get around, with gentle encouragement from Alice and Julia. Alice says it just takes a few pats on the floor to convince Pappy to take a few steps in the direction they’d like him to go. “When we walk, he follows us around the room as he gets used to his surroundings,” Julia says. “He is able to get around quite well and has adapted to his physical disabilities, much like our patients who have lost vision.” And the sisters say he’s a champion at favorite puppy activities like chewing toys and crashing to sleep in adorable positions.

Just like anyone who adopts a pet from a shelter, Alice and Julia are heroes for saving a life. But it’s difficult to say who got the best end of the deal. Julia says, “It is our pleasure to have him. He's not the lucky one. We are!”

To help more animals like Pappy go from homeless to home, become a Best Friends member.