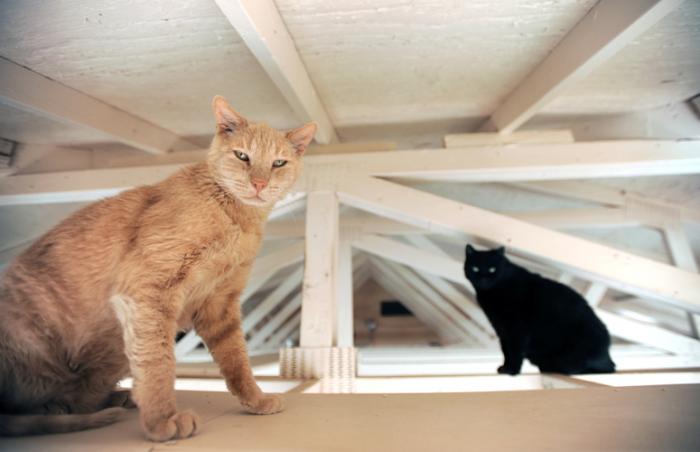 A born leader cat, role model, and friend to other felines

Grover wasn’t so fond of people when he first came to Best Friends. He was just too afraid of anyone getting close to him, so he’d growl and swat people away. But that attitude didn’t last long.

At the Sanctuary, even shy cats get plenty of people time, with friendly faces coming and going all day, every day, and only bringing good things, like food, treats and kindness. Over time, the cats start to get more comfortable with people, opening up a whole new world of happiness for them.

Sometimes, a cat will come along who helps to bridge the gap between caregivers and other shy cats more quickly. Shy Grover, once ready to fight people off if they get too close, turned out to be one of these special cats.

A friend and protector for other cats

Grover arrived in Cat World with four other cats. As the group settled in at the Sanctuary, it became apparent that Grover was a source of comfort for the others in his clan. Nero, Barry, Bud and Rosie looked to the buff-colored cat for guidance and support.

Nero stayed particularly close to Grover, following him around like a shadow. When Grover (who is prone to getting cysts) needed some extra attention from his caregivers, Nero stayed by his side the whole time, sleeping on a blanket on the floor in front of Grover’s carrier, and standing guard when he ate or used the litter box.

As soon as he was feeling better, Grover returned the favor, becoming not only Nero’s best friend, but also his protector. Nero’s not the most assertive cat, so sometimes the other cats will try to push him around. When that happens, all Grover has to do is saunter up and step in between his friend and whichever cat is being rude.

Grover’s not such a big, tough cat. He’s actually quite laid-back and has no interest in getting into a scuffle. Rather, it’s his steady, low-key presence that other cats seem to respect and respond to. “I love his energy,” says Cat World caregiver Heather Henley. “It’s calming, and people and other cats are drawn to it.”

Grover quickly became the cat who sets the tone in the area where he and his friends live. Not only does he keep the peace by not allowing any fighting in the room, he also provides an example of how to act around people.

Though he’s not yet a lap cat, Grover has become much more comfortable since he arrived. Now, when caregivers offer treats, he’ll sometimes stand on his hind legs to take them. He’s even decided that being petted by a person feels pretty good. Taking his cues (and his confidence) from his “big brother,” Nero has started letting people pet him too ― especially when treats are involved. The more attention Grover accepts from people, the more attention his trusty sidekick welcomes as well.

Now, Rosie will climb down from the rafters and hang out for a little while, and even the standoffish Bud comes down to roll around like a kitten on the carpet from time to time. When he sees Grover and Nero getting treats and pets, Barry gets brave and ventures over, too. Pretty soon, it seems, even Bud and some of the other shy cats in the room will be following suit.

It hasn’t always been easy for Grover to start trusting people. Because he’s getting all the support he needs at the Sanctuary, however, he’s not only doing it, he’s bringing other cats with him into a bigger, happier world, where they’ll discover together just how much people love them.