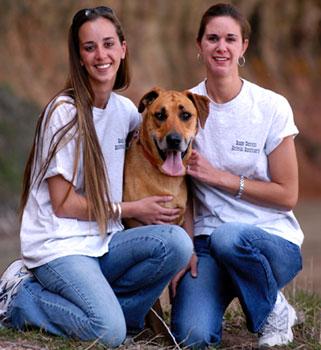 California sanctuary for homeless dogs run by granddaughters of founders

A California sanctuary for homeless dogs is poised for the next stage of its life, so the two young women responsible for the operation visited Best Friends to get advice and brainstorm ideas.

Actually, Leslie Harris and Karen Freitas are the granddaughters of Homer and Dolores Harris, who so generously gave a matching grant for building the new section of Dogtown at Best Friends, called Dogtown Heights. The buildings that make up Old Friends, where the canine senior citizens live, were named in their honor.

And Sage Canyon Animal Sanctuary came into existence because of a pressing need in the area where Dolores and Homer own a ranch.

"Grandma and Grandpa owned the 135 acres in the Aguanga area since the 1970s. When they became full-time residents, people found out they were animal lovers and started dumping dogs. My grandma was paying for their food and care out of her own pocket, so they formed the nonprofit in 1994," Karen said.

Sage Canyon averages about 30 dogs and about one half of them could be classified as "challenging" adoptions. They work closely with the Helen Woodward Animal Center in Rancho Santa Fe, California, so both groups can help more dogs. Dogs who are ready for homes and can live in urban areas successfully are sent by Sage Canyon to the Helen Woodward Animal Center, which sends Karen and Leslie dogs who need more time and care before they are ready for homes.

Karen and Leslie became involved in the day-to-day operations about two and a half years ago. Prior to moving to their grandparents' ranch, Leslie, 26, ran a children's gym at a physical fitness center and Karen, 31, was the office manager for a large retail sunglass chain.

"What we've done for the past two years is great," Leslie said, "but now, after our visit to Best Friends, we know we need to expand our volunteer program and we have to run this like a business. Karen and I realized we can't give any part of the business 100 percent of our own effort because we are trying to do everything."

"We realized we have systems in place, but we need to be more efficient. Now we have an outline of where we want to go as an organization," Karen said.