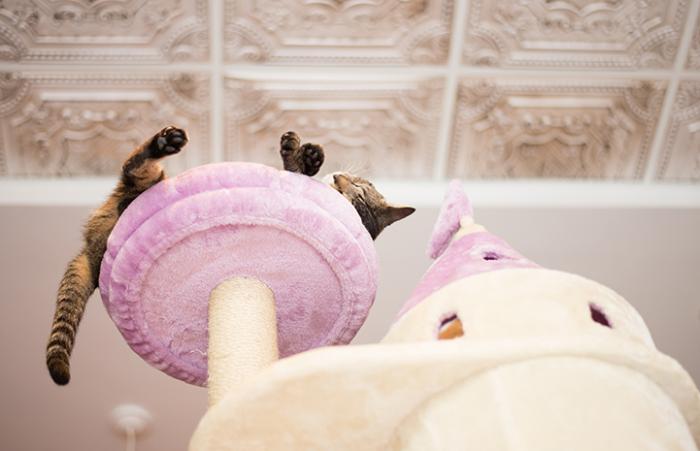 There’s a cafe in New York’s SoHo neighborhood where cross-eyed sandwich thieves roam from table to table looking for their next meal, tiny strangers greet you affectionately for absolutely no reason, and the brave ones may just sit down next you without an invite.

This is exactly what happened Eris Castrogivanni. She was diligently working on her laptop when a fellow cafe guest mustered up some moxie and sidled up next to her without even asking. Eris loved it. 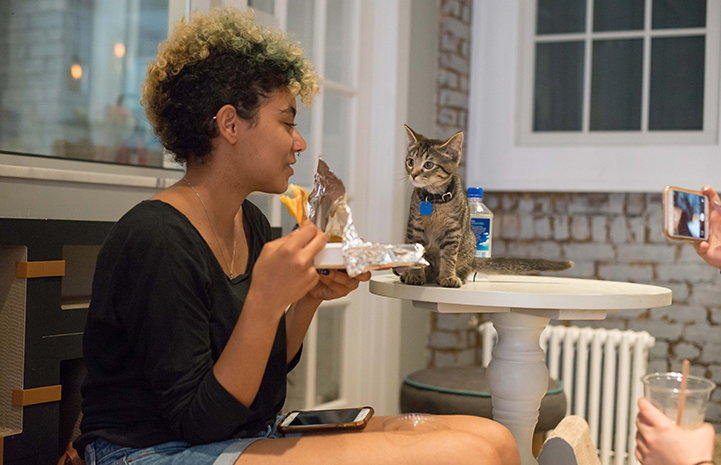 Affectionate and frisky cafe patrons are exactly what visitors who come to the Little Lions Cafe expect. That’s because its residents, adoptable cats from Best Friends Animal Society–New York, are the main attraction. Every day, local New Yorkers and tourists come to Little Lions for an opportunity to sit elbow-to-elbow (or in this case elbow-to-tail) with some of the city’s most eligible cats.

After guests order from the Little Lions menu, they can take what they’ve ordered to the other side of the cafe, separated by a glass wall with cozy chairs and couches, and where about a dozen cats await laps, pets, sandwiches and maybe even a home.

This is how Rachel, a beautiful cat with green eyes and a shiny black coat, found her home. She spotted Eris one day working on her laptop and decided to keep her company.

After meeting Rachel at the cafe, Eris gave Rachel her forever home, completing what turned out to be the first Little Lions adoption.

“I just really wanted a cup of coffee and a quiet place to work. And cats help me relax,” says Eris. “But then Rachel won my heart.” 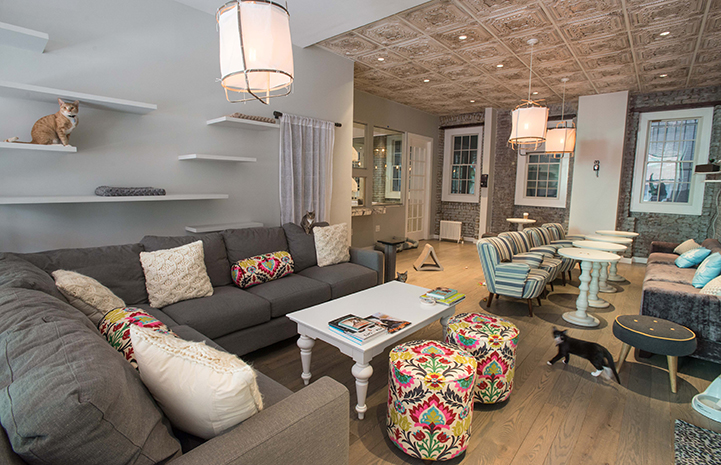 CEO Erin McShane opened Little Lions earlier this year, and it has already helped more than 30 cats get adopted. All cats at the cafe are part of Best Friends–New York, and like all pets in Best Friends’ New York programs, all of them originally came from Animal Care Centers of NYC (ACC).

Partnerships like the one with Little Lions are essential, says Elizabeth Jensen, Best Friends–New York executive director. “Little Lions is an invaluable asset to Best Friends in our work to save the lives of homeless pets in New York. We are very grateful to be chosen by Erin as the animal welfare group of choice for inclusion in her beautiful cafe.” 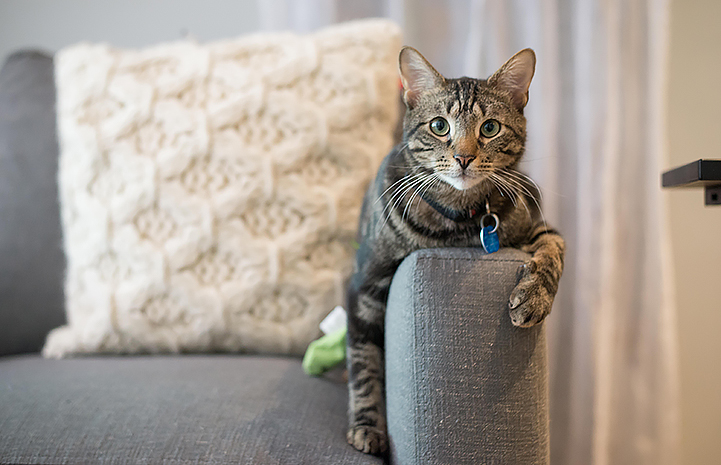 What is a cat cafe? It’s a place where feline personalities can shine

Little Lions is designed so customers feel like they are in a friend’s comfortable apartment — a place where people would want to come and stay awhile to relax and play with the cats.

“It provides a unique opportunity for adopters to get to know the cats in a relaxed, homelike environment.” says Shannon Kirkman, foster and adoptions coordinator for Best Friends–New York. “And the cats can be themselves at the cafe and let their personalities shine.” 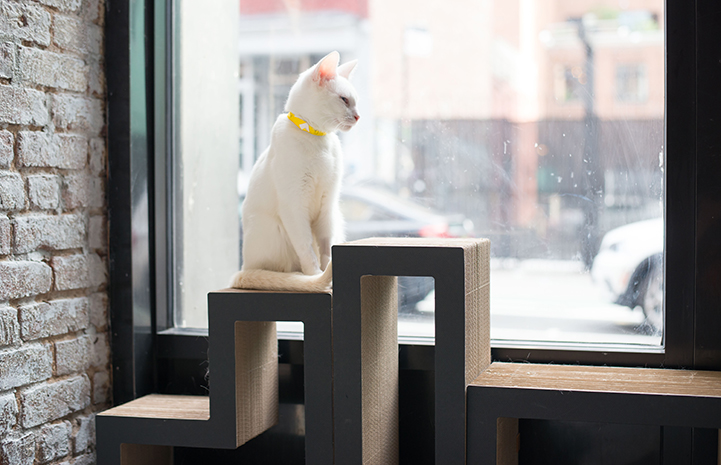 A thief who steals sandwiches, hearts

It was a cross-eyed cat named Oxford, whose quirky personality appealed to John Wyatt Haskell and his girlfriend Rosa the day they stopped into Little Lions. Oxford was affectionately known at the cafe for showing off his indoor hunting prowess by trying to grab sandwiches off customer’s plates.

After John and Rosa spent time watching Oxford in action, they left without him to spend the evening thinking about adopting him. The next day they returned to the cafe and brought Oxford home.

They also gave him a new name that is as unique his personality: Krog.

“We were actually shocked when we got him home to discover that he has even more personality than he did at the cafe,” says John.

Krog is both a graceful athlete and physical comedian. He can leap in the air and swat a fly in one fell swoop, and in the next moment he’ll crash into a wall as he chases something on the hardwood floor.

And he still steals food: avocado rinds, cheddar cheese and strawberries are his favorite. John and Rosa often find that he’s hidden food under their bed.

John says watching Krog at the cafe helped him make the decision to adopt the fun loving two-year-old cat. Because he and Rosa already had another cat at home, it was important that Krog get along well with other cats. And by watching him interact with other cats at the cafe, they could see that he definitely plays nice with fellow felines. 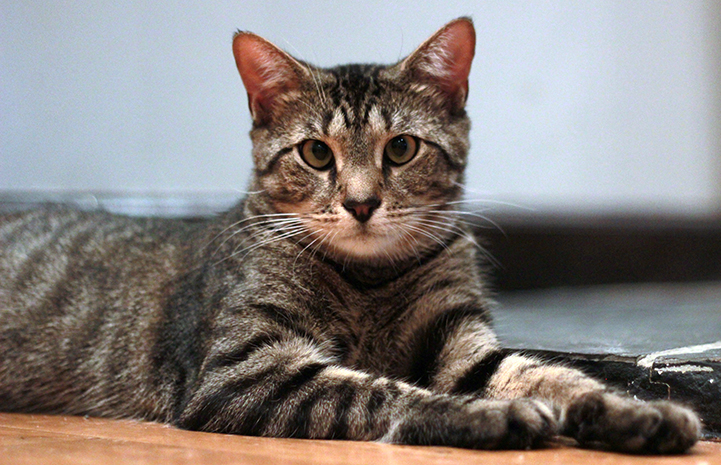 The SoHo neighborhood that is home to Little Lions is also the future location of a new Best Friends Pet Adoption Center, scheduled to open later this year. And Elizabeth, who leads the planning for the new center, sees the cat cafe’s success as a sign that it is the perfect neighborhood for the center, where guests can interact with adoptable pets, much like they do at the cafe.

“SoHo is a vibrant, diverse neighborhood that fosters creativity,” says Elizabeth. “The community has embraced Little Lions and the work they are doing to save homeless pets in a remarkable way. And we are so fortunate to be a part of it.”

Sponsor a Best Friends animal and help save a life 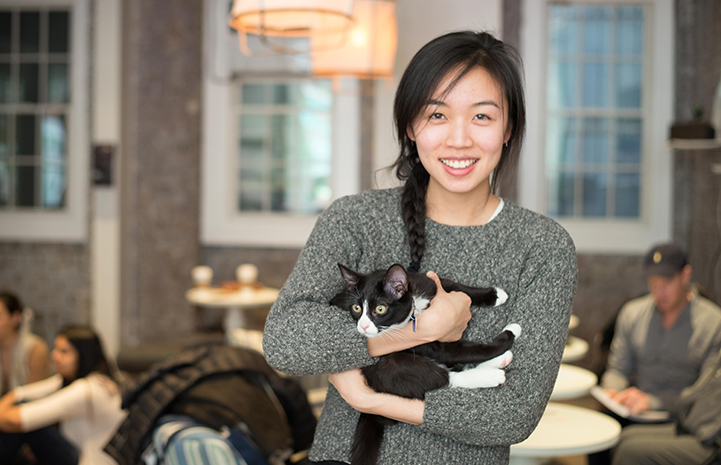