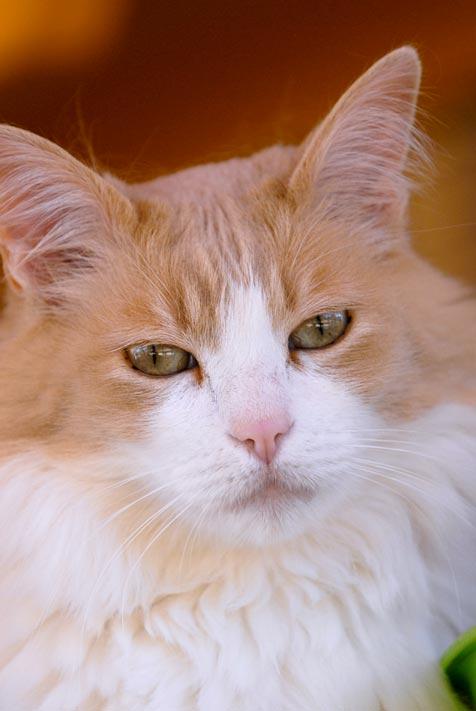 Phoebe the cat might do well to consider a trip to the Vegas casinos for her next vacation. After all, she’s just proven she knows how to beat the odds. ...

Several years ago Phoebe came to Best Friends after her family developed medical problems and could no longer care for her. When she arrived, she tested positive for feline leukemia. This meant she had to move in with the other feline leukemia cats at the Sanctuary.

During her time at Best Friends, she has made quite a name for herself among caregivers. She’s an accomplished mischief-maker and knows how to rile up a room in seconds. For example, whenever a caregiver enters the room to give shots or other medical procedures, Phoebe figures out instantly. Then she sounds the alarm with a few effective cues and the whole room scatters!

Also, while Phoebe herself never gets into scuffles with other cats, if any two cats are starting to get tense toward each other, caregivers swear that Phoebe likes to egg them on from the background. Such a drama queen! Whenever Phoebe's name comes up in conversations among caregivers, each person always has a "Phoebe story" to add to the mix.

She’s not all about making mischief, though. Phoebe is a true sweetheart underneath and has every one of her caregivers wrapped around her little toe. As well, over the years she has become quite the favorite among tour groups and visitors. This girl knows how to work a crowd any way she wants.

There’s one odd detail about her, however, that could only be noticed over time. During her three years at the Sanctuary, Phoebe has never been sick. That’s quite unusual for cats with feline leukemia. They normally come down with at least the sniffles once in a while. Best Friends' veterinarian Dr. Patti Iampietro was looking through charts one day and got to wondering about Phoebe's bulletproof health history. She decided to test Phoebe for feline leukemia again, just in case. And, well, the tests came back negative! That’s right, this feisty cat is made of some pretty tough stuff indeed. She fought off the virus.

Fighting off the feline leukemia virus "is all up to the individual cat’s immune system," explains Dr. Patti. Most cats exposed to the virus actually fight it off without ever testing positive. What’s uncommon, though, is when a cat tests positive and is still able to fight it off and later test negative. Though such a feat is not common, "In theory, any cat can do it," says Dr. Patti.

The funny thing is, when a cat comes through the other side having won the battle against feline leukemia, she usually has a pretty powerful immune system. Consider Jessica, another Sanctuary cat who fought off the virus. Jessica has such a robust immune system these days that she has become a regular blood donor at the Sanctuary, helping other cats.

Phoebe has been transferred to a temporary play area for the time being. In a of couple months they'll test her again, just to be double sure, at which point if the tests are still negative she will move in with other healthy cats at the Sanctuary. Just think of all the mischief she can make with a whole new group of cats to work with!

Considering adopting a cat? Check out our wonderful felines!