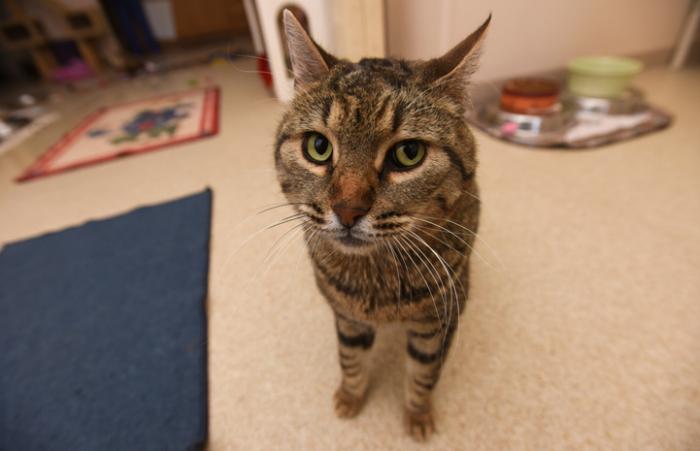 Before Spud came to Best Friends, a near-death experience turned his entire world upside down. He was in a dark place with an uncertain future. But things wouldn’t stay that way for long, because Spud never gave up.

During a routine surgery before he came to Best Friends, Spud had a rare but serious reaction to anesthesia. Though he was still just a kitten, Spud was strong enough to survive. But he would never be the same again. When he woke up, he showed clear signs of neurological damage.

The shelter where Spud was didn’t have the resources to help a cat with neurological problems, and his chances of getting adopted were slim. So he came to live in a part of Cat World that caters to special-needs cats like him. Here, despite his physical challenges, Spud finds joy every day. 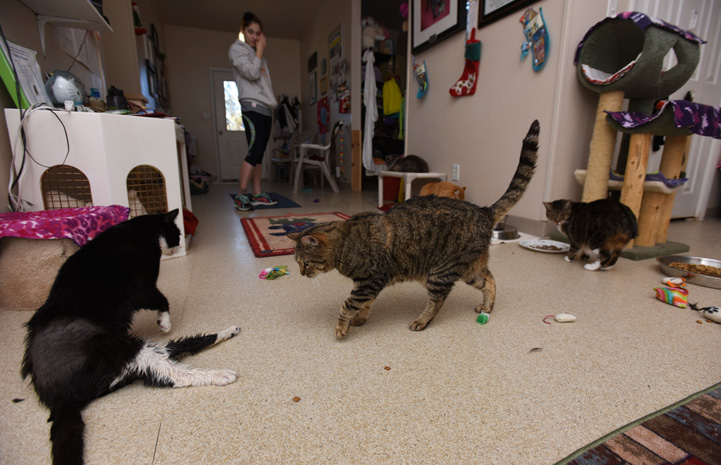 Symptoms of neurological disorders in cats

Spud can’t see and he can’t walk normally, but the determined brown tabby cat always gets where he wants to go. He just gets there in his own way. When Spud moves across the room, he sticks his back end up in the air as if he’s getting the best butt scratches ever. It’s the classic “elevator-butt” pose most cat lovers know, and it’s endearing. With his derriere in the air, Spud’s back legs swing back and forth, and his front legs arc out, as if he’s sweeping the air in front of him with a cane. So he might look different, but Spud doesn’t care. He just keeps right on trucking along.

Now that Spud is five years old, he’s content to spend most of his time sunning himself in front of a window or in his screened-in cattery. But, rather than being confined to these areas, he’s encouraged to roam beyond them — with close supervision by his caregivers, of course.

And Spud has turned out to have an adventurous spirit. While some cats with neurological problems find the outdoors frightening, he isn’t afraid at all. He’s always thrilled to explore the great outdoors.

As soon as Spud’s caregivers carry him out of the building, his ears begin to twitch. Once his feet hit the ground and his caregivers take a few steps away, Spud is ready to play his favorite game.

Spud is strongly tuned into his caregivers and will seek them out. So, when they call his name, shuffle their feet in the sand or pat the ground, Spud quickly figures out exactly where the sound is coming from and runs straight toward it. He knows he’s arrived in the right place when he gets lots of “Good boy, Spud!” cheers and reassuring scratches. Then he’s ready to do it again.

Over time, Spud has learned to follow voices and vibrations the way a cat with perfect vision follows a laser light. Now, his favorite game is follow-the-leader. Instead of standing still, his caregivers will march around in a wide circle or figure eight, calling to him and tapping the ground so he can hear every step they take. Spud happily follows them around, only stopping now and again to shake the soft red sand out of his feet.

Spud’s amazingly good at sticking to the path his caregivers choose for him. As long as he can hear where people are, he stays right on track. The games have helped him develop a whole new way of “seeing” things and, most importantly, they keep him happy.

Though Spud’s neurological disorder has changed his world, it hasn’t kept him in the dark. Because while he’ll never be able to chase a laser light like other cats can, with his sharp senses and determined spirit, he’s doing the next best thing. He’s moving forward toward a bright future with purpose and confidence to rival any other. 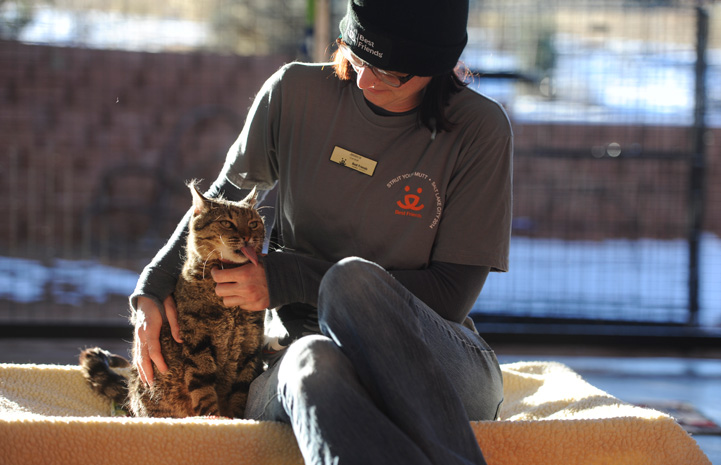 Help more special-needs cats find their way in the world. Here’s how: