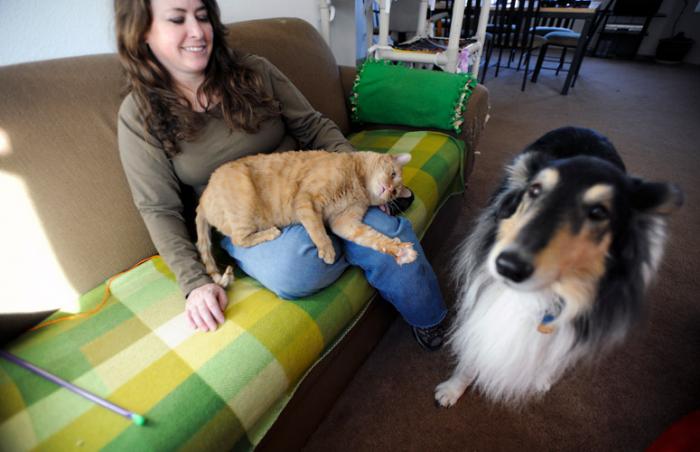 Imagine what most cats do during the day: eat, sleep, play, sleep, use the litter pan, sleep. You get the idea. Not so with Banjo - he's got a job.

While he doesn't have an official title, and his compensation is cat food and TLC, he's proved himself to be worth his weight in gold to Best Friends' Canines with Careers program, which saves shelter dogs' lives by evaluating candidates for many careers, including search, service, therapy and assistance dog work. 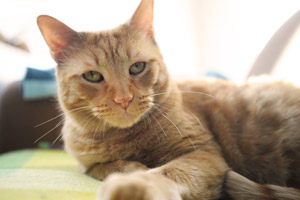 When Banjo, originally from humble beginnings in Texas, first arrived at Cat World, no one knew his hidden talents. It was only when he moved to Claudette's Castle, one of the office buildings at Best Friends Animal Sanctuary, that Sherry Woodard, Best Friends' animal behavior consultant, recognized his true potential.

As head of Canines with Careers, she regularly brings potential program dogs to her office. Walking through the building, she noticed that Banjo watched with great interest.

"I immediately realized he was very willing to become an employee," says Sherry.

Working dogs need to be exposed to many distractions, including cats, and Banjo is just the cat for the job.

"Every time I come in with a different dog, he wants to meet the dog," says Sherry. "He presents himself and he stays at a distance, which is perfect." If the dog notices, but ignores Banjo, that's a good thing. If the dog gets excited or can't tear his eyes away? Well, that's an issue. But Banjo is patient and stays around long enough so they can truly get comfortable. If they don't get comfortable, they're probably not right for the program.

Perhaps it's appropriate that Banjo helps evaluate the suitability of potential career dogs, including service dogs, since he's considered special needs himself. He has the feline immunodeficiency virus (FIV), which weakens his immune system. However, you wouldn't know that by looking at him.

"He's a very happy, healthy cat," says Sherry. "Is (FIV) a special needs? Not really. It's something to be aware of, but it certainly isn't anything that we worry about - or he worries about. He's doing great."

Sherry feels he's special in other ways. For example, every time someone walks through the kitchen, Banjo runs over. She laughs, "We need to watch how many treats he gets, because he's so good at asking for them."

Banjo has already been the first feline encounter for roughly 20 dogs. He even manages to break through misconceptions, showing that some dogs who had been rescued from dog-fighting situations get along great with cats. 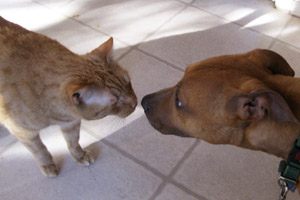 Once when Alamo came to visit during a staff meeting, Banjo came right up to lie next to the dog. The working cat was so comfortable; he even rolled over onto his back, belly exposed. And Banjo made Norton, who is afraid of people, feel right at home.

"Until we try to help them," says Sherry, "there's no way to tell what they can and cannot do."

Of course it should come as no surprise that Banjo is a natural with dogs. He's been described as doglike himself. All Sherry needs to do is ask him if he wants to go for a walk and he runs for his harness. Car rides? Yep, he loves them. He even hangs out at the local fire hydrant to roll in the sand.

While it's ironic that Banjo the cat is well on his way to becoming an honorary dog, he's not completely there yet.

"His boldness is seen as doglike. However, he doesn't retrieve and I know a lot of cats that do," laughs Sherry. "If he really wants to cross the line, he needs to bring me toys."

Learn more about introducing a cat and a dog.